Angela Merkel, after receiving the Carlos V Award in Yuste: “Only a Europe united inside is strong outside” 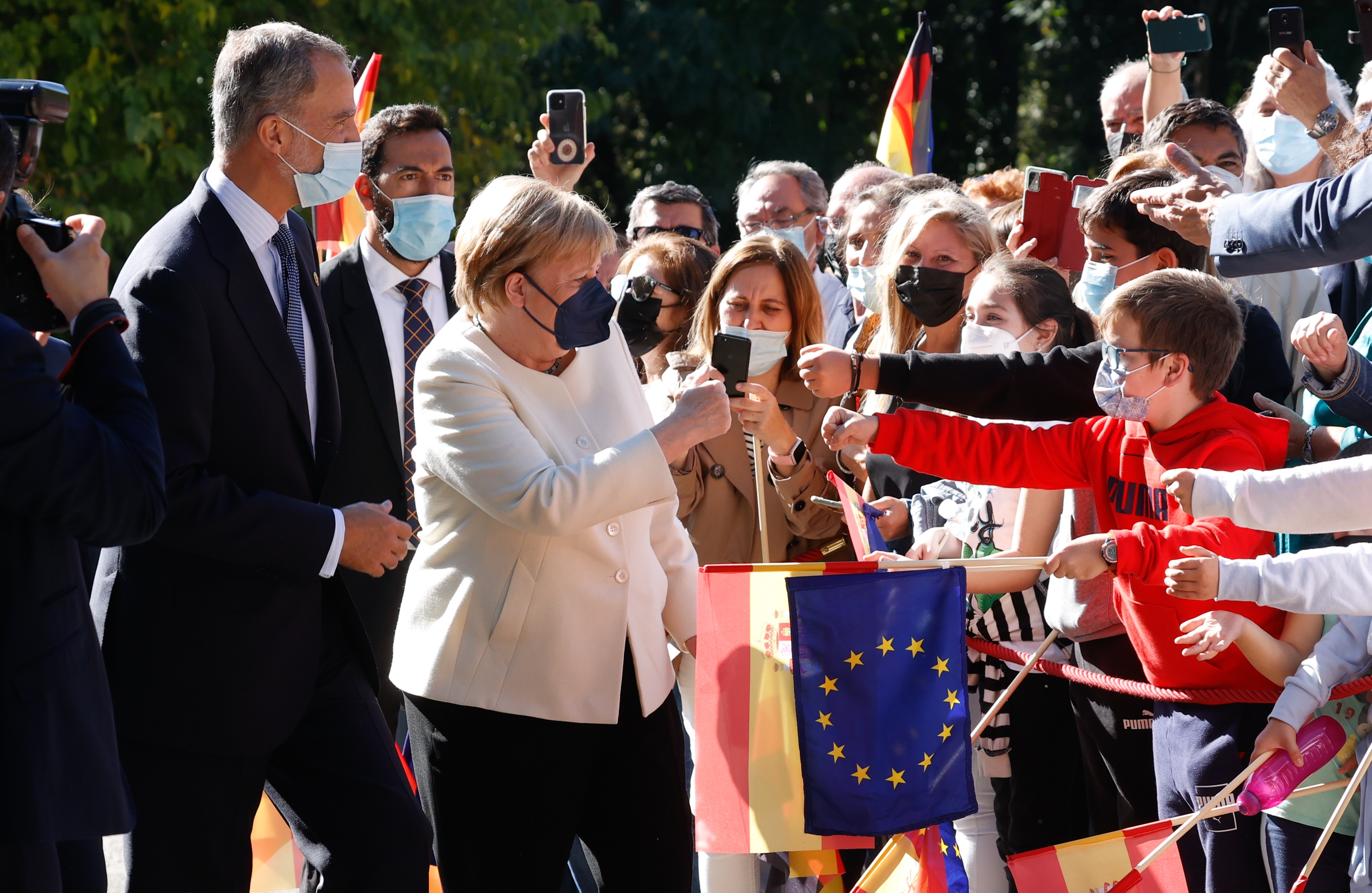 About to leave the German Chancellery that she has occupied for 16 years, Angela Merkel received this Thursday at the monastery of Yuste (Cáceres), from the hands of King Felipe VI, the Carlos V. Merkel European Prize did not want to use her speech to take stock of his long term as head of Europe’s leading economic power; it preferred to focus on the challenges facing the European project, the threats that lie in wait and the need to continue forging agreements on matters as complex as immigration; although, as she herself has emphasized, she will no longer be able to be one of her crushers. “Only a Europe united on the inside is a strong Europe on the outside,” he said.

The King, for his part, praised Merkel’s ability “to reach consensus and find balanced solutions.” After recalling that she has defined herself as a “state employee”, she praised her “tenacity and perseverance”, her “pragmatism and reliability” and her willingness to put “commitment before confrontation”. She represents “the spirit of the best united Europe”, added Felipe VI, who ended with an appeal: “Let’s continue building Europe, our best collective project”.

Previously, the Chancellor had warned of the rise in Europe of “centrifugal forces” that become more powerful as European values ​​weaken, community institutions do not respond to the expectations of citizens and economic and social differences become more acute. Faced with those who put national interests before the principles of the Union and its legal basis, he has called for strengthening internal cohesion and has added, in veiled allusion to Poland, that it is only possible to “continue to maintain a sincere dialogue and highlight common values” , such as respect for human and minority rights.

The coronavirus pandemic has shown, in his opinion, how easy it is to fall back on national solutions and seek protection behind borders, but the EU has been able, he added, to overcome this crisis together, as shown by the approval of the funds Next Generation. Although reaching agreements between the 27 partners “is difficult and laborious” and requires “being willing to consider different positions”, has recognized Merkel, the only way is to find “compromise solutions.” Faced with the challenge of climate change, he has warned that there is much talk about the cost of advancing in decarbonization, but less about the cost of not doing so, and he recalled the catastrophic floods that his country suffered this summer, which many link to global warming . “We must not get out of the crisis as we entered. Economy and ecology must go hand in hand ”, he said.

Merkel has called to fight “with the greatest determination” the outbreaks of intolerance and has warned that the EU must speak with one voice in a world in which China is emerging as a political and economic power. In conclusion, “more European sovereignty” is needed, because “the Union is fortunate for all of us, which we must preserve and continue to build,” concluded his speech, welcomed with prolonged applause.

The president receives this award in discount time. After the German elections on September 26, he is waiting for a new government to be set up, presumably chaired by the Social Democrat Olaf Scholz, to leave the chancellery he has held since 2005. His four terms have been full of lights and shadows. : its inflexible defense of an iron austerity as a recipe to exit the recession that began in 2008 brought the countries of southern Europe to the brink of social explosion, while its open-door policy in the face of the wave of refugees from the Syrian war in 2015 he showed his most human face, but gave wings to the rise of the extreme right in Europe. In the face of the coronavirus pandemic, he put aside the inflexibility that he showed during the economic crisis and gave the green light to a recovery plan of 750,000 million.

The European and Ibero-American Academy of Yuste Foundation, chaired by King Felipe VI, has awarded since 1995 “those people, organizations, projects and initiatives” that have contributed to the “enhancement of European values” or the “unification of the European Union” . This 2021 he wanted to recognize the long career of the German Chancellor “at the service of Europe” and her firm defense “of the European integration process and the important strategic role of Europe in the international arena”.

Merkel receives the award 15 years after her predecessor in office, Helmut Kohl. She is the second German to receive it and the third woman, after the former President of the European Parliament Simone Veil (2008) and the promoter of the Erasmus program Sofia Corradi (2016). The ceremony was attended by three former winners: Felipe González (2000), Javier Solana (2011) and Marcelino Oreja (2017).

The event was also attended by the President of the Government, Pedro Sánchez; that of the Junta de Extremadura, Guillermo Fernández Vara; that of the Constitutional, Juan José González Rivas; that of the General Council of the Judicial and Supreme Power, Carlos Lesmes; and that of the PP, Pablo Casado. While waiting for the arrival of the king and Merkel, all of them have formed a group at the entrance of the Yuste monastery, although it has not been seen that Sánchez and Casado spoke directly. Those who have departed for a long time have been Casado and Lesmes, a day after the former agreed to negotiate with the Government the renewal of all the institutional bodies that have concluded their mandate (except precisely the Judicial Power) and shortly before it was reached an agreement on that renewal. The European Carlos V awards are usually given on May 9, Europe Day, but the pandemic forced them to be canceled last year and this year has delayed the ceremony until October 14.

Government of Mexico: They promise to accelerate their climate goals after John Kerry’s visit