The oasis of startups in the working-class south of Madrid

Small signs of gentrification are observed in the south of Madrid. For example, Rosa Sánchez’s food business looks more and more like a gastro bar. His specialty has always been the XXL stews and sandwiches that the residents of the neighborhood have devoured with enthusiasm for 26 years. But Rosa has signed on to culinary innovation since she opened near the center of startups from La Nave Town Hall and young entrepreneurs began to arrive at the dining room. Ingredients such as truffles, avocado, caramelized onion or raisins marinated in muscatel now appear on its menu.

“The level of the neighborhood has risen,” says she, owner of the Peña de Francia business. “Now we prepare the food with more decoration and affection.”

The dining room full of Peña de Francia is an example of the small change that the Nave is promoting in the working-class neighborhoods of the Villaverde district. It is not normal for the north of Madrid to go down to work in the south, but this experiment paid for with municipal funds is one of those rare occasions. The Ship houses for two years free of charge startups selected by the City Council for their expectations of success (there are now 56). Now it is common to see young people in the Villaverde-Bajo Metro carrying laptops under their arms in the direction of La Nave.

Last week, as is customary annually, the largest event in the technological world took place at the Nave in the capital of Spain, South Summit. More than 20,000 people attended the three-day event, some after paying a ticket premium from 900 euros. King Felipe, President Pedro Sánchez and Mayor José Luis Almeida visited the congress. 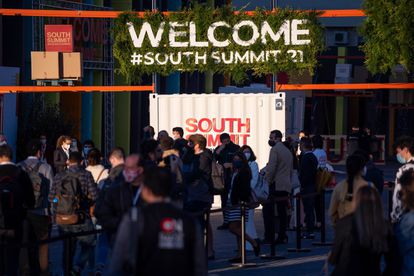 Audience at the South Summit technology summit, in Madrid, which took place between Tuesday and Thursday of last week. SOUTH SUMMIT (Europa Press)

But to tell the truth, although Peña de Francia is full, most visitors to South Summit spend the days inside the enclosure of just over 12,000 square meters, where there are food trucks and a patio with tables to make contacts. There are few alternatives for leisure and food in the immediate surroundings, dominated by red brick floors and green awnings, the common stamp of humble Madrid. 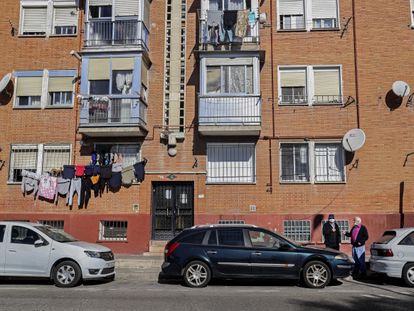 Neighbors talking in front of some flats near La Nave de Boetticher, in the Villaverde district (Madrid capital) .Aitor Sol

La Nave has not fostered a community of innovators in its environment either. The map of startups that the Community of Madrid has published since last year shows that this center is an oasis in the middle of the district’s desert. There are not others startups around it and the vast majority of the more than 3,200 innovative companies in the region are concentrated on the M-30, close to the multinationals that are its clients and the investors who finance them. The only one that appears in Villaverde, Sepiia, a startup of smart fashion fabrics, has already left the district.

The question is whether Villaverde will take advantage of the boom in the technology sector or will see it pass by. Only so far in 2021, 1,200 million euros have been invested in Madrid, double that in 2019, according to the Madri + D foundation, which depends on the Community of Madrid. It is an investment fever that is benefiting the developed world after a 2020 drought.

La Nave is one of the most ambitious public projects recently carried out in the south of a very uneven city. The building was the old Boetticher elevator factory, which went bankrupt in 1992. In the 60s and 70s Boetticher was one of many factories in Villaverde, a prosperous Madrid that suffered greatly from industrial decline. Its headquarters was about to be demolished, but the Alberto Ruiz Gallardón City Council (2003-2011) considered that it should reconvert such a unique building because it had a large vaulted central nave, which had led the residents to nickname it “the cathedral ”.

Politicians created a lot of expectations around the Ship. The mayor who had the idea, Gallardón, sold it as “the cathedral of new technologies” and Mayor Manuela Carmena’s team said that “the south can be a factory for innovation.”

But the usual thing is that companies that complete their incubation stage in La Nave later move to central locations. An example is Sepiia, the fashion company, which manufactures fabrics that “neither stain nor wrinkle.” After passing through La Nave, in 2020 he settled in the fashion district of Madrid, around Alonso Martínez. They are close to communication agencies, los showrooms and other players in the sector. “La Nave is a fantastic place but we were interested in being at Alonso Martínez,” says Fede Sainz, the CEO of Sepiia. “You are close to the people around you. You go out for a coffee and next to it you find someone ”. In general, the technology sector is highly dependent on network and that is a disadvantage for Villaverde.

The management of the Ship it costs the City Council 1.1 million euros per year and has been awarded since 2017 to the Madrid consultancy barrabes.biz, which has managed to attract the interest of startups -There is a waiting list- and it has included the residents of Villaverde in technological training activities.

The Councilor for Innovation of the City Council, Ángel Niño, recognizes that he has the challenge that the neighborhoods benefit from the “success” of La Nave. This Wednesday it opens in the district a municipal incubator for food companies, Madrid Food Innovation Hub, and in the coming months it will open a sandbox, a space to test innovations such as drones or driverless cars. It also exists since the mandate of Carmena another incubator of the City Council with space for 12 companies in Villaverde Bajo. “We want innovation not to remain concentrated here in La Nave and to spread to the neighborhood,” Niño tells this newspaper. The City Council has also promoted nurseries in Carabanchel, Moratalaz, San Blas, Puente de Vallecas and Vicálvaro.

Concha Denche, spokesperson for the La Nave Boetticher neighborhood platform, says that La Nave is a hope for the Villaverde neighborhoods. “The building was once a lonely space and now you see movement of young people. Neighbors have also been gradually integrated into the activities ”. The district has ample space for new companies in the Villaverde Industrial Park. But Denche fears that this land will end up being occupied by the logistics sector, which needs spaces close to the center for its “last-mile” delivery. “We do not want it to be dedicated to logistics because that consumes land, generates congestion and does not create jobs,” says this neighborhood activist. 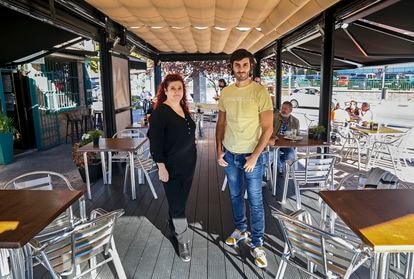 Sometimes, the companies incubated in La Nave generate close ties with the neighbors. An example is Encantado de Comerte, which offers restaurants or greengrocers the possibility of selling their leftover food in an app. The bar Peña de Francia, by Rosa Sánchez, has joined the initiative. Before, he would throw away or give away the surplus food from lunch and now he offers it from 5:00 p.m. to 8:00 p.m. on menus at a reduced price of 4.75 euros. “These young people are taking an interest in neighborhoods that were previously lost from the hand of God,” says Sánchez gratefully.