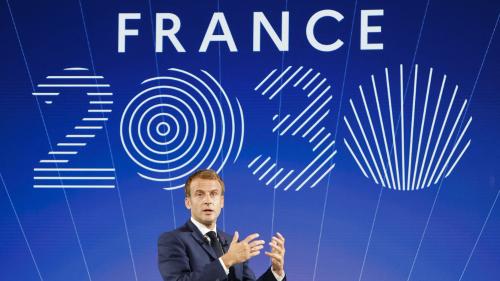 Electric cars, nuclear power plants, agriculture turned towards robotics and genetics… The President of the Republic, Emmanuel Macron, detailed, Tuesday, October 12, the priority sectors of the France 2030 plan to “bring out the champions of tomorrow”, facing Chinese and American competition. Here is what to remember from the speech by the Head of State, in front of nearly 200 business leaders, ministers, elected officials, students and researchers, gathered at the Elysee Palace.

An envelope of 30 billion euros

The president began by drawing lessons from the pandemic, which “made us feel our vulnerability”. It showed “our dependence on foreign countries: 18 months ago, we were all subject to the lack of masks (…) We must rebuild the terms of a French and European productive independence”, he declared in preamble. Emmanuel Macron believes that the epidemic has also shown the need for “breakthrough innovation”.

“If we don’t reindustrialize the country, we won’t be able to become a great nation of research and innovation again.”

in its presentation of the France 2030 plan

To develop this industrial competitiveness and the technologies of the future in France, Emmanuel Macron has therefore announced the release of 30 billion euros over five years. The France 2030 plan that he presented “sets the first ten clear objectives, to face these challenges and to produce better, to live better and to understand our world”.

President Emmanuel Macron immediately announced that he wanted to invest one billion euros in nuclear energy by 2030 to develop “disruptive technologies”, and in particular “small nuclear reactors”. “We are ready to invest a billion euros in it by 2030,” he said. “The number one objective is to have innovative small-scale nuclear reactors emerge in France by 2030 with better waste management.”

Become “the leader of green hydrogen in 2030”

The second objective is to “become the leader in green hydrogen by 2030”, in particular by building “two gigafactories or electrolysers”. Hydrogen is produced by electrolysis, and it can be considered green if it is carbon-free (nuclear power produces energy without emitting CO2).

“This is one of the sectors where we can become leaders because we have assets”, and “firstly nuclear”, said the Head of State. He notably cited the steel, cement and chemical production sectors which need green hydrogen to replace fossil fuels, as well as “supplying trucks, buses, trains and planes”.

This objective is part of a broader roadmap aimed at “decarbonizing our industry”, that is to say allowing factories to produce while emitting much less carbon. “In total, more than 8 billion” euros will be devoted to energy and decarbonisation.

Adapting the transport of the future

The next two objectives relate to transport. We must “produce in France, by 2030, nearly 2 million electric and hybrid vehicles,” said Emmanuel Macron. Recalling that “the last 30 years have been cruel for the French automobile industry”, the Head of State judged this objective “attainable”, but for that it is necessary “a real cooperative strategy, in particular of our big manufacturers” .

In addition to land transport, the Head of State also spoke of air transport, expressing the wish to “produce in France by 2030 the first low-carbon aircraft”. “I think it’s totally doable. The best experts tell me, ‘never before 2035’, but they were telling me a year ago that we wouldn’t have a vaccine. So I think I’m almost too pessimistic about it. betting on 2030! France is a big aeronautical country, and we are going to invest massively “, he commented. “In total, 4 billion euros will be invested in the transport of the future”.

The sixth objective stated by Emmanuel Macron concerns agriculture. France must enter into a “new revolution in healthy, sustainable and traceable food” by this time and for that “invest in three revolutions which will in a way be the continuation of the mechanical revolution and the chemical revolution that we are doing. has known: digital, robotics, genetics “, he described.

These investments should make it possible to “decarbonize” agricultural production, “to get out of certain pesticides”, “to improve productivity” and to develop “more resilient productions and more solid in bio-solutions”. In total, 2 billion euros will be invested in “breakthrough” innovations in agriculture, in particular in robotics.

In addition to the major sectors of nuclear, automotive, aeronautics and agriculture, the president particularly insisted on the pharmaceutical and medical field, after a year marked by the Covid-19 pandemic. “Better living is also better care (…) We have the human capacities, research and practice. predictive, ”he said.

Emmanuel Macron thus wishes to produce in France “at least 20 biomedicines against cancer, chronic diseases including those related to age and to create the medical devices of tomorrow”. An envelope of some 3 billion will be devoted to it.

“Securing our supply” of rare materials and components

Finally, Emmanuel Macron concluded on the need to secure the supply of what is necessary for the sectors of the future. “We will not achieve all these objectives if we do not secure access to our materials. We are behind in this strategy: the Chinese have better integrated the principle of scarcity of these materials. We must be able to guarantee the supply of plastics and metals, while improving the circular economy to reduce our dependence, ”he said. “We also need to secure our supply of components,” he said, referring to the semiconductor shortage that is plaguing many industries. Six billion euros will be devoted to developing national production of key components.