EU tries to reduce tensions in Northern Ireland over checks 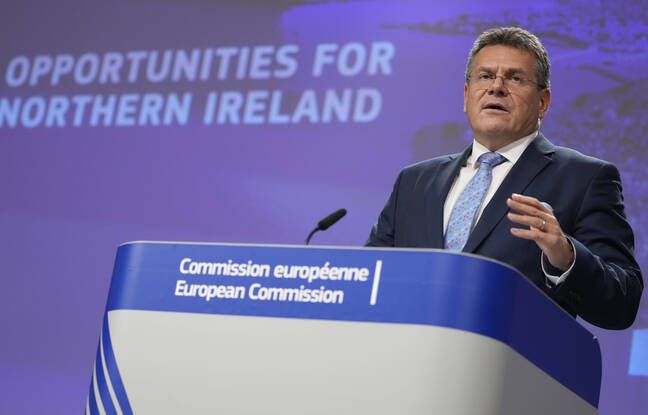 Brussels unveiled on Wednesday solutions to try to ease Brexit-related tensions in Northern Ireland. The European Union has therefore proposed to London to ease controls on certain goods destined for the British province in order to facilitate supplies. These proposals are our “sincere response to concerns” in Northern Ireland, underlined Commission Vice-President Maros Sefcovic, presenting the European offer.

The measure would affect “a wide range” of goods from Great Britain and “consumed in Northern Ireland,” said a statement. It would have the effect of reducing controls by around 80% and customs formalities by 50%, creating a sort of “fast lane” for these products, the Commissioner underlined.

In return, to protect the integrity of the European internal market and ensure that these products do not enter it, London should give guarantees, such as a label indicating that they are intended for sale “only” in the United Kingdom. and a “rapid reaction” mechanism to identify and resolve problems, under penalty of unilateral action by Brussels.

The Commission is ready to engage in “intensive discussions” with the British government in order to reach “a lasting and joint solution as soon as possible”, specifies the press release from the European executive. A Commission delegation traveled to London on Wednesday to present the European offer.

Maros Sefcovic is due to meet British Secretary of State David Frost on Friday in Brussels. Held responsible by London for the supply difficulties in the British province, the implementation of the Northern Irish protocol, concluded as part of the Brexit treaty, has poisoned relations between London and Brussels for months.

COVID-19: in a Roman hospital, the remorse of the unvaccinated