The Ortega Government to the US Ambassador: “Give up imposing your creeping and aberrant policy” 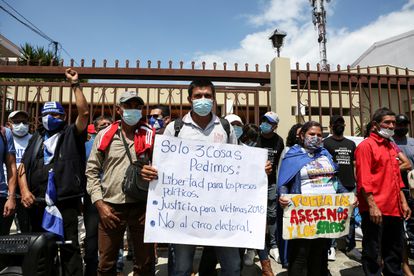 The United States Ambassador in Managua, Kevin Sullivan, has received a strong reprimand from the Government headed by Daniel Ortega due to his critical opinions of the regime and his positions in favor of press freedom and the rescue of democracy in the country. Central American. In a letter full of qualifiers made public on Monday and signed by the Nicaraguan Foreign Ministry, the Sandinista Executive demands that the diplomat refrain “from continuing to violate our national harmony” and warns him that he must renounce to impose “his vulgar, creeping, aberrant, insolent , ignoble, abominable and decadent Yankee politics ”. Neither Sullivan nor the US embassy have reacted to the note, which apparently came after the ambassador posted a greeting to the magazine on Twitter. Confidential for its 25th anniversary. The newsroom of the magazine has been raided twice and its facilities confiscated by the regime.

In the discord tweet, Sullivan wrote: “Congratulations to @confidencial_ni for his 25 years defending the democratic values ​​of freedom of the press and independent journalism ”. Hours after this message was published, the Government made the claim public. Although it is not the first time that the diplomat has expressed his opinions in favor of press freedom and human rights in Nicaragua: he has also spoken out against the imprisonment of journalists and the importance of a democratic change in the country. “On National Journalist Day we congratulate the independent journalists of Nicaragua who risk their integrity by clearly reporting daily events. Without a free press there is no democracy, ”he wrote in March. “Alternation in power through free and fair elections is the essence of a genuine democracy. Thus, a sovereign people continues to chart its destiny. It usually happens smoothly, other times with more difficulty. The most important thing is that it happens ”, reads another of his tweets.

This type of message raises blisters in the Managua regime, which maintains a tense relationship with Washington. The Donald Trump government imposed strong sanctions on the closest circle of Ortega’s collaborators, as well as on his wife and vice president, Rosario Murillo, and several of their children. The Biden Administration has continued and expanded sanctions, while US officials strongly criticize the regime’s authoritarianism and the human rights violations of what they have called a “dictatorship.”

The United States has increased that pressure by announcing visa restrictions for 100 members of the National Assembly and other officials in July. The Secretary of the State Department, Antony Blinken, reported on that occasion that the decision is directed against those who “make it possible for the Ortega-Murillo regime to attack democracy and human rights.” Bliken has warned that “the United States will continue to use all the diplomatic and economic tools at our disposal to promote the release of political prisoners and to support the Nicaraguan request to live in freedom, for the government to be accountable and for there are free and fair elections, “according to the statement.

In the diplomatic note published hours after Ambassador Sullivan’s message, the Ortega government accuses the diplomat of maintaining constant interference in the internal affairs of Nicaragua and thus violating its sovereignty. “Sovereignty, which is not discussed, nor is it handed over to the ‘fierce barbarians’, cannot continue to be violated or violated by the invaders themselves,” the note reads. “Cease your covert attacks, your hypocritical salutations, disguised as a diplomatic courtesy that you abandoned long ago, which rather has been and is an example of the continuous, perverse, detestable invasive interference of the United States in Nicaragua,” the document continues. The Sandinista regime began a hunt against critics and opponents since June, jailing 37 dissidents, including seven candidates to contest the presidency in the November 7 elections, which Washington has described as illegitimate.