Tens of thousands of Poles demonstrate in favor of the EU 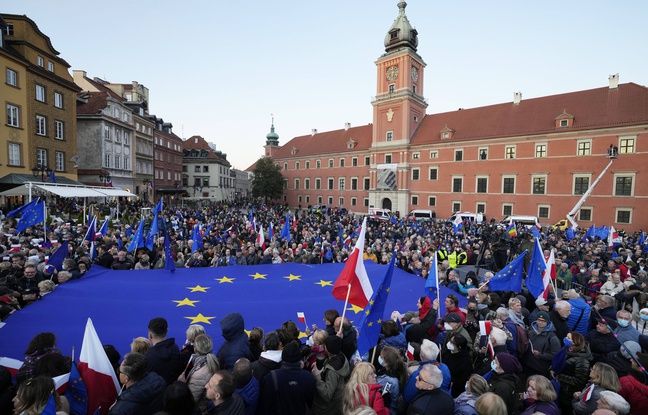 The European question ignites debates in Poland. Tens of thousands of Poles demonstrated on Sunday evening to defend their country ‘s membership of the European Union, after a ruling by the Polish Constitutional Court challenging the rule of European law.

This decision, refusing any European control over Polish laws, could mark a first step towards Poland’s exit from the EU – which the government has however denied. It is against this idea of ​​a “Polexit” that the Poles mobilized on Sunday, at the call of the leader of the opposition and former President of the European Council Donald Tusk.

Donald Tusk urges to “save Poland”

“Tens of thousands of people in Warsaw and in more than 100 towns and villages in Poland came to protest against what this government is doing to our homeland,” Donald Tusk told a huge crowd armed with European blue flags in the capital. Earlier today, he called on his compatriots to “defend a European Poland”. “We have to save Poland, no one will do it for us,” he added on Twitter.

“I am here because I fear that we are leaving the EU. It’s very important, especially for my granddaughter, ”said Elzbieta Morawska, 64, who was parading in Warsaw. “The UK has just left the EU and it’s a tragedy. If Poland leaves now, it will also be a tragedy, ”said Aleksander Winiarski, 20, who studies in England and was also demonstrating in the capital.

Polls in favor of the EU

Poland and other Central and Eastern European countries joined the European Union in 2004, 15 years after Lech Walesa’s trade union movement helped to overthrow the Communist regime. Membership of the EU remains very popular, according to the polls, but relations between Warsaw and Brussels have become markedly strained since the populist Law and Justice (PiS) came to power in 2015.

The clashes relate in particular to the reforms of the judicial system wanted by the government, and which the EU believes will undermine the independence of the judiciary and risk leading to a reduction in democratic freedoms. The most recent of these conflicts is the decision on Friday of the Polish Constitutional Court which challenged the primacy of European law over Polish law, ruling several articles of the European treaties “incompatible” with the Constitution of the country.