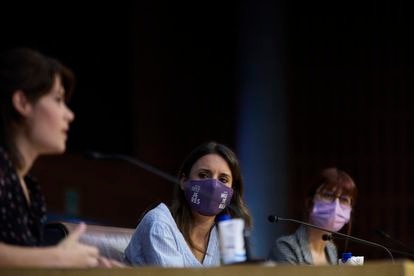 Podemos has vindicated this Saturday the feminist struggle against the policies of the extreme right. The same weekend that Vox meets in Madrid to present the so-called Spain Agenda, Ione Belarra’s party wanted to emphasize its commitment to women’s rights in a day of debates marked by the feminist agenda. Irene Montero has criticized that the bipartisanship has done “nothing” to “persecute the impunity of the pimp industry” and has advocated for modifying the immigration law to legally recognize women who are in a situation of prostitution in Spain. The Minister of Equality has intervened in the conferences of the Autumn University of the party, the forum for reflection that is being held these days in Rivas-Vaciamadrid and with which Podemos seeks to relaunch its agenda and broaden the political space.

“Abolitionism cannot be just a slogan,” Montero said before defending “specific public policies” in this regard. The minister has also referred to the LGTBI collective. “That it is the objective of the attacks by the extreme right is not by chance, it has to do with the fact that these lives are the most evident proof that there are other ways of being a woman or a man and that we can build different societies,” he emphasized. the number two of Podemos, for whom “the enormous amount of economic resources for the rise of the extreme right” around the world “can only be understood as a reaction to the advance of feminism.”

Hours before, the spokesperson for Podemos, Isa Serra, has been very critical of Santiago Abascal’s party, considering that it is demonstrating “absolute incapacity” as an opposition force to the coalition government. “Despite meeting, debating and continuing to propose these barbarities against women’s rights, this country is far ahead.” Serra has referred to the feminist movement as the “main force” to “keep moving forward” in the face of an offensive by the extreme right around the world that seeks to “take” women “to the past.”

Ángela Rodríguez, called to be the new Secretary of State for Equality to replace Noelia Vera, has also participated in conferences that present a more relaxed format than that of the institutional press conferences. The party’s secretary for LGTBI Rights has predicted “a very tough battle” with the government partner in the coming months over obstetric violence – carried out by health professionals against pregnant women – and that United We can consider violence of genre.

The demands of the feminist movement have been part of the essence of Podemos since its foundation more than seven years ago, but with the departure of former Vice President Pablo Iglesias and the change of Executive, women now occupy the main leadership positions of the party. Belarra herself, together with the Organization secretary, Lilith Verstrynge, has participated as a listener in the debates this Saturday and will be in charge of closing the conference on Sunday with Iglesias. The former vice president returns for the first time to an event of Podemos since his retirement.