Dancing with a mask, an impossible rule in Madrid’s nightclubs

Purple and red lights shine through the windows of a nightclub on Calle de San Vicente Ferrer, in the Malasaña neighborhood. Inside the premises, about thirty young people dance to the sound of reggaeton. The song of The Makinón by the Colombian Karol G. A group of four friends move around a high table, on which they rest glasses of gin and lemon. “Now it is much better because the restrictions have been relaxed. At least you can move now, ”says Fabia Elejabeitia. The 19-year-old accepts that people are less afraid to go out dancing and meet other people. “We are looking forward to going back to the same old thing,” he concludes. Supported by the DJ booth, Martín Fernández comments that he has been going out every Friday night since summer.

Dancing has returned to the dance floor of Madrid’s nightclubs, although it is only allowed with a mask and maintaining a safety distance of one and a half meters. This was announced this Thursday by Isabel Díaz Ayuso, president of the Community of Madrid. After 20 months affected by the restrictions of the pandemic, nightlife venues admit that it is an impossible rule to comply with.

“If we go in, do we have to be seated?” A girl asks the doorman of the Milky Way, in Malasaña. “We are tired of being policemen,” says the manager. At half past ten at night, Velarde Street, which leads to the Plaza del Dos de Mayo, is full of young people queuing to enter the bars. “The mask”, indicates the doorman to a boy who enters the premises.

Teresa López, 18, waits with her friends in line. The Madrilenian says that she has not been partying since August: “It is appreciated that you can dance now.” A few meters below, Paula Esteban joins the queue with five more friends. The young woman explains that she has not gone out for drinks until she has been vaccinated: “Every time we are closer to going out again as before, but, if we go ahead a lot we can go back”. 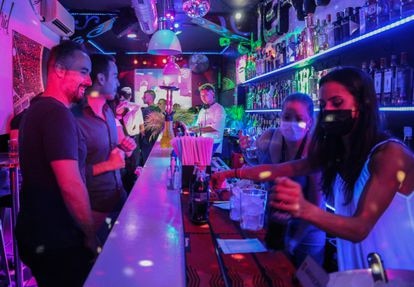 The bar of a nightclub in the Malasaña neighborhood, in Madrid.Aitor Sol

At midnight, young people gather at the doors of nightclubs in the lower part of Argüelles in the Moncloa area. The farm’s security workers, who control the space, assure that they have been overwhelmed for two weeks. “This is the new normal,” says the manager when opening the door of one of the premises. About 100 people, without a mask or safety distance, dance freely on the dance floor. Among the crowd and the silver sparkles of disco balls, a group of girls dance on the stage of the premises. Those below follow the beat and sing loudly the song of Virtual Diva from the singer reggaetonero Don Omar. One of the young people, Nicolás García, reveals that “for two weeks, no matter how much it could not be done, people were already dancing inside”. The hotel industry and nightlife returned to their normal hours on September 20, with closings at two and six in the morning, respectively.

On Calle de Fernando el Catolico you can see a long queue that reaches the end of the street. Many of the young people arrive at seven in the afternoon to be able to enter, because “it fills up very quickly,” they say. Three friends who come from Lanzarote are amazed at the amount of people they have met during the Madrid night. Raúl Santana declares that “in the Canary Islands it is almost impossible to see something like this. They are much more strict with the measures ”. Although, they admit to being happy to go out to a disco. “I don’t know if I’ll remember to dance,” says her friend with a laugh.

The manager of the premises indicates the capacity control on the screen of his mobile. At one in the morning there are 223 people inside, of the 300 that it can accommodate. This ensures that it is impossible to meet the standard. It seems impossible to control that people can dance with a mask meeting the distance of one meter of safety with one hundred percent of the capacity. The doorman of a nearby place agrees: “I have everything full. There is no room for a pin. If the police come, they will give me a fine ”. “For people the virus no longer exists,” concludes another that safeguards the entrance to a nightclub on Calle Fernández de los Ríos.