Treasury leaves 6,000 million margin in the Budget for the tax reduction of electricity in 2022 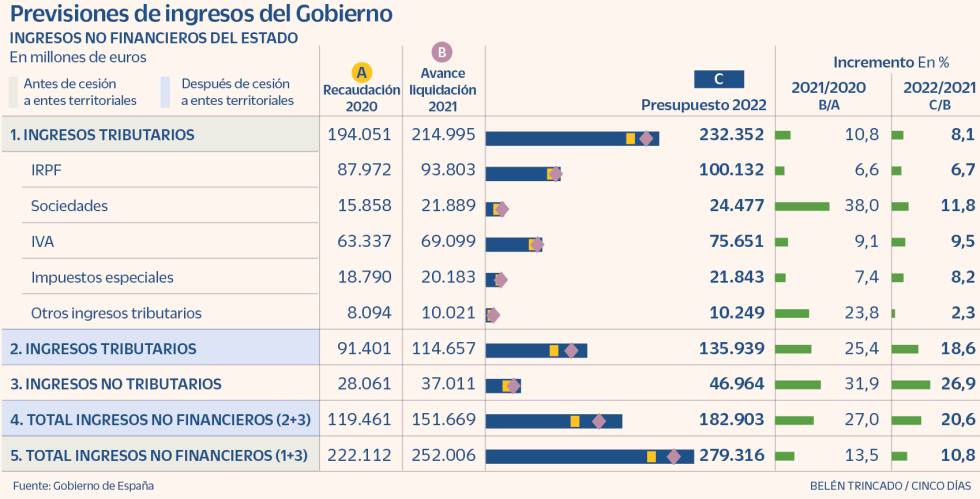 The draft General State Budgets for fiscal year 2022 approved yesterday by the Council of Ministers does not include major developments in the tax field beyond establishing a minimum rate of 15% in corporate tax, reducing the deduction on contributions again to private pension plans and extend the self-employed module system. “There is no trap, no cardboard,” promised the Minister of Finance and Public Function, María Jesús Montero, when asked about the tax changes included in the 2022 accounts. What the new Budgets do contain is a sufficient fiscal margin to allow the Executive to extend for much of next year the tax cuts approved this year to try to contain the rise in electricity prices. Specifically, a cushion of about 6,000 million euros.

To find this space you have to look at the collection projections of the accounts. “The increase in tax revenue will continue in the next year when we expect collection to grow by 8.1% compared to the forecast for the end of 2021”, which is an advance of 10.8% after the fall in 2020, ”Montero announced. “This is a prudent, realistic estimate, which is below the forecast for nominal GDP growth, which would reach 8.6%,” he added.

It is in this difference between the forecast of nominal growth of the economy and the increase in tax revenues, which would normally be measured, where the margin is hidden that, according to official sources, the Government reserves to continue cushioning the rise in electricity.

It is about five tenths of GDP, almost 6,000 million, with which the Executive would comfortably cover at least another half year of palliative measures after having lowered the price of electricity from 21% to 10%; reduced from 5.1% to 0.51% the Special Tax on electricity and suspended the tax on electricity production from 7%.

If these measures are not extended, therefore, the revenue and deficit forecasts could improve by that half a point of GDP, although the evolution of the price of the megawatt leaves little room for hope.

The great tax novelty occurs in Societies, which this year will collect 38% more than in the worst of the pandemic, and will continue to increase its income by 11.8% in 2022 to 23,477 million. The figure includes the 400 million euros that the Treasury estimates that it will be possible to collect by promoting a minimum rate of 15% on the tax base for consolidated groups and companies that invoice more than 20 million per year. Although the vast majority of Spanish companies already pay above said threshold, around 21.5% on average according to data from the Tax Agency, Montero estimated that 1,070 firms will pay more taxes with the minimum rate. They are those that, starting from the nominal rate of 25% (30% for banks and oil companies) applying deductions and tax benefits end up paying less than 15% of their tax base (and that this amounted in 2019 to only a quarter of the profit of the groups). Of course, knowledgeable sources of the fine print assume that the affected companies will be able to reserve tax credits for past losses that they cannot end up enjoying for the minimum rate for subsequent years.

The measure, which the first Government of Pedro Sánchez already tried to promote in 2019, then formed part of the coalition pact with United We Can and was put on hold due to the pandemic, is now being resumed due to the pressures of the purple formation in the negotiation of the budget plan. Montero, however, framed it in the international agreement of 130 OECD countries to promote a global rate of 15% for multinationals. Although the agreement will mean the abolition of national digital taxes, the minister said that “it is too early” to know when Spain will have to cancel its Google rate, pending the completion of the pact and the European directive that develops it. Given the low collection that this tax and the Tobin tax are reaping, of course, Montero admitted that they will lower the collection forecasts for 2022 to adapt them to the real settlement of 2021.

The minister clarified, in any case, that the great fiscal reform that she plans will be undertaken once the report commissioned is known to a committee of experts that will publish it in February.

For now, and in the absence of parliamentary processing of the accounts, there will therefore be no fiscal equalization of diesel to gasoline, or new changes in VAT rates. The trump card for the negotiation, it is suggested, could be to accept amendments to continue delaying the remodeling of the registration tax, which is more taxing on polluting vehicles, currently paralyzed until the end of the year.

In turn, the cost of the public debt issued by the Treasury would be 30,175 million euros next year, which represents a reduction of 4.7% compared to the 31,713 million that it will bear this year, announced the Treasury, for the double effect of a decrease in outstanding liabilities and a reduction in the deficit.