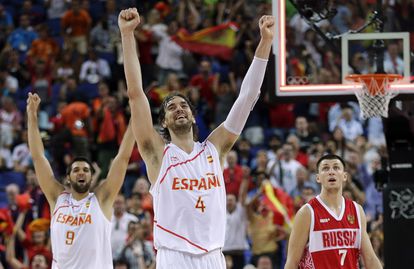 You don’t have to live in New York like I do to realize the dimension that Pau Gasol has reached. The enormous repercussion of his retirement makes me think that people in Spain had not really realized the scope of his figure. Pau is great in the United States and around the world, and not only because of what he has won. You can be the best player in the world, but you have to also be the best off the pitch. And I think Pau has won almost more outside than inside, which is saying. That makes it more loved if possible. As he said: “I have gone to the Real Madrid pitch and they have applauded me.” For me that is not because you are from Barça or Madrid, but because you have represented many Spaniards and you have always respected all rivals and fans and you have made yourself admired and loved.

It even seems normal to me that a player like Russell Westbrook declares that he was his idol during his early days. Each one has different idols and sometimes you grow up watching someone play and if it is Pau who is being an important player at that time and you like his type of game, he may be your idol. It shouldn’t surprise us. After all, Westbrook was at the University of Los Angeles (UCLA) when Pau joined the Lakers. But at the same time, that makes us see the scope of Pau. To put it in some way, it is not only ours. That a franchise like the Lakers retires its jersey indicates that it will be there with the greats forever, in a very, very select club, along with those of Kobe, Magic and Abdul-Jabbar. When he got there they hadn’t won for a long time and had two rings in a row. And since he left, they went without winning for a long time, until LeBron James arrived.

You have to understand that before the NBA was very far for European basketball. Technology and the press have made it seem like we have it right around the corner now. But it is still just as difficult. He opened that door. It began to bring our generation closer to that League, it helped us to think that we could go there. The rest of us follow that path.

The first time I saw Pau we were kids and I already realized that he was special. Just because of his physique, you could already see it. And to that he added his talent, of course, and the way he was improving, but not a little bit, but by leaps and bounds, with that desire to always continue to progress. At last it became the reference. He led many times by example, in the field sometimes, speaking others. It is that mixture of knowing how to be at all times that makes him special. We were aware that we had a great player and a leader who listened to you and helped you. I have played alongside other great leaders like LeBron and there are no secrets in this. You have to work a lot. You are not the best just because. And you must be aware that this is a team sport. There are no shortcuts to being the best. If you are not able to see that to win you need your team, you will not win and you will not be the best, that is more than proven.

We have a lot of difficult times. The good thing about this Spanish team is that if Pau wasn’t there, there was Juan Carlos, or Jorge, or Rudy, or Felipe. We had been together for so long that we knew that when something didn’t work out, everyone was just as respected and as a leader. But we also knew that Pau was our best player. It wasn’t necessary for him to be the leader every day, but that’s also being a good leader. Knowing how to let go if someone takes the floor. There were many moments when Pau put the team on his back, like that game against France in the 2015 European Championship. And I have many hugs in my memory. I was left with his image lifting the World Cup in 2006 because of what it meant, because it made everything change, because he couldn’t play the final, because they made a mistake and gave it to him thinking it was the MVP’s —the captain was Carlos Jiménez. That image means a lot to him, to us and to Spanish basketball.