Collect chickens by the lava and escape from volcanic bombs: the difficult ‘routine’ of scientists on La Palma

“If you don’t pass, who is going to pass,” joked the Civil Guard agent at the access control to the exclusion zone, giving way to the technicians who were traveling in the car of the National Geographic Institute (IGN). Once there where no one else can be, under the La Palma volcano, scientists and specialists in many disciplines have worked among the dangerous gases and the lava bombs that the crater spits, against the clock and with the added pressure of knowing that it is try to save people’s lives. Some of these scientists came almost like paratroopers to fight in the trench, with practically no bed assured, they barely visited three or four hours each night. Many admit to having skipped more than one meal, when work piles up and the day’s goals drift away. The unforeseen are constant. And among so many difficulties, the rain of pyroclasts was joined by the rain of journalists and authorities to attend to.

Today there are already some routines that have been stabilized, but the first days were a fight without quarter. “It is being very hard, we never know what we are going to find,” Manuel Nogales, CSIC delegate in the Canary Islands, acknowledged last week. Literally: Nogales would enter the forbidden zone early in the morning and find bloodied fighting cocks, peacocks and other disoriented domestic animals. Nogales’s account of the early days was common to many of the scientists deployed on the ground: arriving at bed well after midnight, sleeping for a few hours, and back to school. jeep, to enter the restricted area to fight the elements.

Three scientists risk their lives on the La Palma Volcano. An explosion of the main cone surprises 3 scientists of Involcan, forced to protect themselves from the rain of pyroclasts and lapilli. The dramatic moment was recorded by one of them. #lapalma #VolcanLaPalma pic.twitter.com/fE2VYGjt1p

Some, such as geologists from the Geological and Mining Institute (IGME) or technicians from Involcan (Instituto Volcanológico de Canarias), have had to run away and seek refuge when suddenly the volcano they were studying became dangerous even for them. On Sunday, IGME researchers had to flee from the mountain of La Laguna due to the high emission of gases, such as they counted on video from the car, and on Friday those of Involcan they had to hide behind a wall when they were surprised by a dangerous pyroclastic rain at its peak of explosiveness.

Sometimes the rain is not so dangerous, but it puts the entire volcanic watch system at risk. The amount of ash that the volcano spits out is of such magnitude that it completely covers the solar panels that feed the stations with which the IGN monitors the volcano, listening for symptoms on the island, such as its tremors and its deformation. So volcanologists had to do many miles each day with a broom through the bush just to sweep those panels. “If we did not clean them, we would go completely blind,” warns María José Blanco, director of the IGN in the Canary Islands, about the importance of these data to monitor the eruption. Now, Blanco says, it is the Military Emergency Unit that is dedicated to sweeping them, giving volcanologists a lot of time to focus on more technical tasks.

Still, it is unavoidable to do dozens and even hundreds of miles on the road each day just to stick with your routine. Sometimes, because the threat of gases or explosions forces to cut roads, turning a 20-minute route into another of more than an hour. Or simply because, as happens to the researcher Ramón Ramos, from the State Meteorological Agency, he has to monitor the two stations that they have installed to control the emissions of the volcano at two ends of La Palma: “An hour and a half to Tazacorte and then back . Almost every day I miss a meal, ”explained Ramos, armed with a brush and wipes to clean sensitive pieces of instruments from ash. 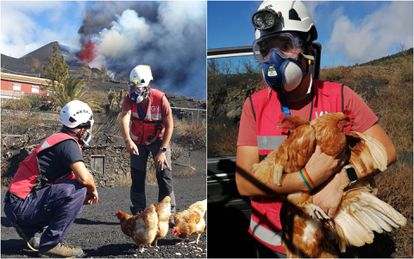 The volcanologist Rubén López, from the IGN, collects some abandoned chickens near the lava on La Palma.IGN

Meals were almost a luxury the first days: more than once they have run out of dinner when they returned from the camp late at night or they have resolved a lunch with a Red Cross sandwich. The CSIC scientists were fortunate to have the generosity of the owner of the SPAR supermarket, who let them enter and eat whatever they wanted to choose from the store’s shelves there. Regarding accommodation and coexistence, Rubén López, IGN volcanologist, sums it up like this: “He has been a Big Brother among us, managing to live together”. The IGN set up its command post in a parish office, the AEMET took over the cafeteria of a visitor center.

The unforeseen events are constant and force us to deviate from our plans at all times, as López explains: “We found some chickens that were loose, very close to the lava, and they came running towards us when they saw us. My parents have chickens in Talavera and I know more or less how to catch them; I picked them up without problems and we put them in the car ”. The photos show what he relates: a volcanologist rescuing three chickens suddenly near the heat of the laundry.

What many of these specialists want is to spend as much time as possible on the ground, near the volcano, to study its behavior in detail. For this reason, it has been common to hear their complaints between jokes about the dedication that demanded them to serve authorities such as the Kings and members of the Government and, above all, journalists. The geologist Stavros Meletlidis shows on his mobile the record of the calls he receives every day, sliding his finger across the screen over an endless string of unidentified numbers: “I don’t know who any of these are, they don’t stop calling.” Even so, all of them have taken the trouble to dedicate much of their scarce time to the media. 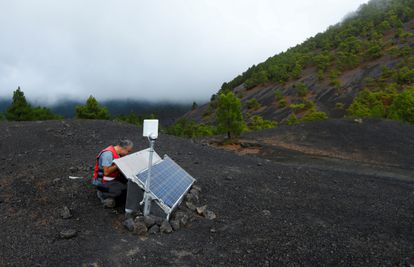 Stavros Meletlidis, from IGN, works two days before the eruption in one of the seismic stations that must now be cleaned daily.BORJA SUAREZ (Reuters)

“We have to give that back to society, explain what we do with their money,” says Eugenio Fraile (IEO-CSIC), head of the campaign that studied the volcano from the sea on the ship. Ramón Margalef. They had been working non-stop against the clock for 72 hours to study the coast before the lava arrived, but Fraile and his team found a space to repeat the same messages three times to three different television crews that boarded, including EL PAÍS, with direct included.

In addition to conventional media, many of them have turned to social networks to spread their knowledge. The official accounts of Involcan, IGN O IGME on Twitter they are fuming with formidable videos and constant updates on the volcanic situation. But unexpected stars of popularization have also emerged, such as the IGN seismologist Ithaiza Dominguez or the IPNA-CSIC volcanologist Vicente Soler, who performs educational video summaries in front of the volcano with its elegant way of explaining the eruptive process.

They disseminate their knowledge not only to the media or on social networks, but also to everyone around them, as pointed out by Olga Sánchez (IEO-CSIC), Fraile’s partner in the Margalef: “The ship’s crew was superinterested in the geological phenomenon and science that they were experiencing live, so we had some very fun classes on board.” Then, as the lava fell down the ravine into the sea, marine geologists began to speculate how it might unfold on the seabed using what they had at hand: the Nocilla was lava and the slice of bread served as a coastal cliff. 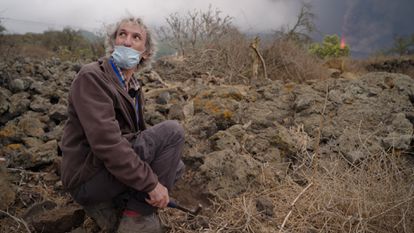 The volcanologist Vicente Soler (IPNA-CSIC) digs the ground to install a seismograph on La Palma, with the volcano in the background. Luis Almódovar

The relationship with the people of the island, of course, is essential. From the simplest to the most terrible, mutual understanding is absolute. At the pharmacy, they give Meletlidis the eye drops to remedy the itchiness caused by the ash. Soler had no problem getting a farmer to let him, pick and tile, install a seismograph on his land next to the goats, not far from the volcano. López recalls hardest moments: “I was talking to other scientists and a person approached me to ask if their house had been razed. You cannot assure him of one thing or the other … And it leaves you very wrecked ”.

A catastrophe to which these scientists also assist helplessly, as Olga Sánchez points out, due to her experience on the ship: “We had been working on board for three days and [cuando llegó la lava] It was the first time that we saw the tragedy with our eyes, we began to see how the banana trees were burned, the noise it produces ”. López explains that there are people who ask for photos of the laundry environment, to see their home: “That is why we do not publish photos in which houses appear on networks, because what we do not want is for people to find out how their house is for a tweet ”, he assures.

Galilea Montijo underwent a treatment to rejuvenate his neck: “he is very famous”

Galilea Montijo underwent a treatment to rejuvenate his neck: "he is very famous"