The planet rather than a big salary, revolution in the grandes écoles?

“It’s super fulfilling to just fulfill your dream, invent your own profession, get out of the path we have mapped out for you,” says Aurélie, 26 years old. That day, the young woman came to talk about her career to students from Polytechnique, the prestigious engineering school that she attended a few years before them.

“You are told that you will go to work in the industry, that you will be company directors…”, she continues. Before advising much more to orient yourself “on what really makes you vibrate”. This is all the more justified in his eyes as “the climate emergency shows the limits of the economic model built by our predecessors”.

A village of tiny houses after the X

Aurélie did not do things by halves. After the X and a year of a first permanent position, she launched in Saint-Brieuc the first tiny house village in France, those
tiny houses where one experiences a more sustainable and resilient lifestyle.

How many are there, these students of grandes écoles, to give up the destiny that had been traced for them for a career that they deem much more compatible with the environmental and societal challenges of our time? “There is very little data on this subject, responds Arthur Gosset. But a lot for sure. »He chose six which he followed for a year, camera in hand, to his documentary Ruptures, released a few weeks ago. Alongside Aurélie, we discover Maxime, a graduate of Science Po, Hélène, who went through a business school, Romain and Emma, ​​graduates of engineering schools, and Melvin, 20, who refused to join a major school despite its abilities.

A fundamental movement in the grandes écoles?

We could add a seventh profile with that of Arthur Gosset. The 24-year-old Lyonnais made Ruptures during his gap year at
Centrale Nantes engineering school. Like an irrepressible need to bear witness to what it senses to be a fundamental movement in the grandes écoles. Which strikes him in any case head-on. “The more I had a global vision of the environmental crisis, the more I felt out of step with certain lessons and with this ambient pressure that one can feel there,” he says. We are expected, starting with our parents, to have a “good job” in a big company without asking too much about what we will actually do there. “

While discussing around him, Arthur Gosset realizes that he is far from being the only one, in his promotion, to have this feeling. Above all, in September 2018, 32,000 students, mainly from grandes écoles, signed and published “For an ecological awakening”. This manifesto sounds like a warning to their employers. They say they are determined to “include in [leur] daily and [leurs] businesses have a social and environmental ambition ”and say they are“ ready to question [leur] comfort zone for society to change profoundly ”.

This quest for meaning is still as lively as ever, if we are to believe the third barometer “Talents, what they expect from their jobs”, published at the end of May, which questioned 2,000 students and young graduates of grandes écoles on their professional aspirations. “Having a job in line with your values ​​is one of the three main criteria taken into account when choosing their first job,” explains Jean-Michel Caye, associate director of
Boston Consulting Group (BCG), at the origin of this study with
the Conférence des grandes écoles (CGE). This concern has only been reinforced for the past five years. Remuneration only comes in eleventh position. The environment also remains largely at the top of the privileged sectors: 71% of students and 81% of graduates say they are interested in working there.

Large companies that are less popular?

So much for the intentions. The reality is more contrasted, resumes Jean-Michel Caye, according to whom the profiles of students in rupture – in the sense in which Arthur Gosset understands it in his documentary – are “very minority”. Large groups remain in any case the number 1 destination for students and graduates surveyed in the barometer. This is not necessarily incompatible with this quest for meaning in the work, points out the study. Even if they judge the environmental commitments of these large groups not at the level of their capacity for action, 86% of those polled believe that they remain the most able to be able to change things. “This is the message that the students sent to large groups in September 2018,” says Jean-Michel Caye. Okay to work with you, but the environment becomes a non-negotiable factor. And in fact, there is not a large company that has not positioned itself on this subject. “

Jean-Baptiste Avrillier, director of Central Nantes, still considers the upheaval more profound. “About ten years ago, the vast majority of our graduates left to work in large industrial groups, when 75% opt for much smaller structures (SMEs or TPI) today, illustrates- he. Notably because they find it easier to find alignment with their values. “

The same goes for Alice Pégorier, in economics and finance ** at Dauphine and member of the collective
“For an ecological awakening”, born in the wake of the manifesto. She quotes
“The great barometer”, a national survey published in February on how schools and universities integrate ecological transition issues into their program and operations. “The study pointed to the desire of a growing number of students to be better trained to integrate other types of structures. [les
entreprises de l’économie sociale et solidaire (ESS), les institutions publiques, les ONG…] than the big companies to which they are predestined, she explains. Many are also asking to extend to these actors
“Business forums” organized by these grandes écoles by inviting companies – very often large groups – to come and recruit on their campus. This was the case for example at Dauphine or at
ESCP. » 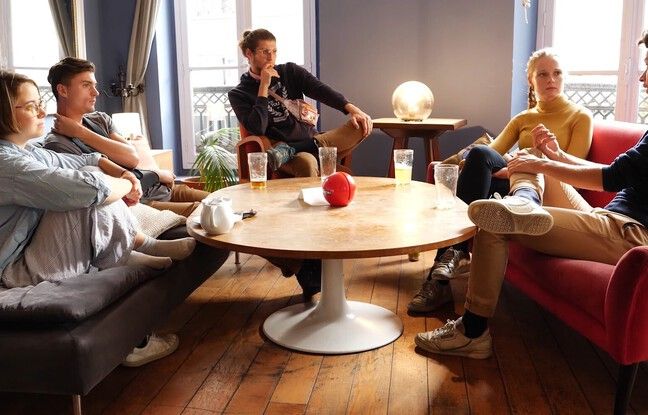 In the documentary – / Photo @Arthur Gosset

Breakups that are not easy

There is also a point that Alice Pégorier would have liked to see explored in the survey of the BCG and the Conférence des grandes écoles: “what is the share of these graduates who joined a large group with the hope of contributing to the change from the inside, but who leave it very quickly after losing their illusions? “, Questions the one who, within the“ business ”pole of the collective“ For an ecological awakening ”, tracks the greenwashing of these large groups.

Here again, the student perceives a fundamental movement that Arthur Gosset also evokes. In Ruptures, we follow Hélène who, after graduating from her business school, joined a multinational retailer. Before quickly becoming disillusioned. “I have always been committed against overconsumption and I realized that the company was making me act in the opposite direction to meet its growth objectives ever higher from one year to the next,” she describes.

She will eventually resign when offered a promotion. The rest is a long and difficult journey to reorientate oneself. Arthur Gosset does not avoid this step. On the contrary, it is the heart of his documentary: “to show that breaking down is not easy,” he insists. We often have to give up a lifestyle, accept failure and the idea that retraining will take time, even if it means going through unemployment, facing disappointment and the concerns of loved ones. Is it worth it? “When we become aware of the climate emergency in which we are, the question no longer arises, believes Arthur Gosset. Even less when you come out of high schools and you are often in the situation of being able to choose your employer. “