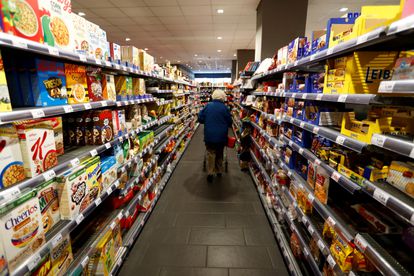 A woman walks down the aisle of a supermarket in Berlin (Germany) .Fabrizio Bensch (Reuters)

The International Monetary Fund (IMF) does not move a comma from its thesis. Inflation, he maintains, will reach a ceiling this fall in rich countries to fall as of winter and throughout 2022. In the middle of next year, according to their technicians in an advance of their global economic report that will see the light of the week that is coming, it will be “around 2%”. The Washington-based body recognizes that, at a time like this, when the economy is navigating uncharted waters, any projection carries significant “risks.” But it also almost flatly rules out the world entering an inflationary spiral.

“Rising commodity prices, bottlenecks in supply chains and the unprecedented nature of an economic rebound like the current one are putting pressure on headline inflation. And these uncertainties are fueling their concern that inflation may persistently exceed central bank targets, unpin expectations and lead to a self-fulfilling spiral, “admits the Fund’s analysis department in advance of its forecasts. His analysis, however, suggests that “probably” that is not the case. “We expect, in both advanced and emerging economies, that headline inflation will decline to pre-pandemic ranges by mid-2022,” he stresses.

The IMF will present all its macroeconomic forecasts next week. But this Wednesday it already offers an appetizer in the form of aggregate inflation figures: in advanced economies, it predicts, the general rate will peak this fall at 3.6% – after a “drastic short-term increase” – and then fall to 3.2% at the end of the year —or 3.4% if all the upside risks materialize— and up to the aforementioned 2% in 2022. The situation is more complicated in emerging countries, which have a much longer track record. prolix of inflationary outbreaks. In that block, his calculations point to headline inflation still around 4% by the middle of next year.

The Fund’s forecast endorses the apparent calm of central banks on both sides of the Atlantic, which until now have stoically resisted the growing pressure from those who believe that the rise in prices should force them to withdraw stimulus now. Both the European Central Bank and the Federal Reserve (Fed) have maintained their prudent attitude for now, trusting that the price hike will be transitory. Its aim is to prevent an early withdrawal of debt purchases, as the most orthodox voices already demand, and a premature rise in interest rates from stifling growth and hitting financial markets that left the crisis behind long ago.

Prices have risen strongly in recent times – in the US inflation round highs of three decades and in Europe it has reached its peak in 13 years – due to a combination of demand factors (recovery of consumption from the lows of a year ago) and, above all, supply (higher prices of raw materials, with energy at the forefront, and bottlenecks in the supply chain). However, the IMF believes that the impact of demand will soften from 2022 to return to have – as in the years immediately before the pandemic – minimal deflationary effects in 2026 and beyond. In other words: the post-crisis pull in demand will have inflationary effects, but limited in time. It is much more difficult to know what will happen and what impact it will have on the factors that are limiting supply, for which in many cases there are no recent precedents.

Expectations anchored in the long term

The key variable in whether the price hike is overnight or rooted in the engine room of the economy – the deepest fear of those who fear a spiral – is long-term expectations. And, in the Fund’s opinion, they present a “relatively strong anchor level”. “In advanced economies they gradually tend to return to around 2% on average, with low risk of decoupling,” he says. In the case of emerging markets, again, reserves are imposed: “Expectations point to their remaining anchored in the medium term, although with greater upside risks.”

If that were not the case and inflation got out of hand, the risks would be clear: it would be “costly to stop.” Hence, central banks must, at least for a time, “walk a tightrope between patient action to support the recovery and, at the same time, prepare to act quickly if inflation expectations show signs of dislodging.” Much of the immediate economic future depends on the ability of central banks to dribble on that tile.