More than 1,034 million pesos have been allocated for the rehabilitation and modernization of dams in our country from 2012 to September 2021, a figure that, according to experts consulted, is very low since the vast majority of these are in the final stage of their useful life and natural phenomena show the deficiencies.

Through a request for information, the General Subdirectorate of Hydro-agricultural Infrastructure of the National Water Commission (Conagua) indicated to El Economista that through the Hydro-agricultural Infrastructure Construction Management, and specifically of the K-111 Rehabilitation and Modernization of Dams Program and Estructuras de Cabeza, has carried out different works in some of the works that are in charge and that are considered in the list of the 210 Main Dams in Mexico.

In 2015, the lowest investment was recorded in said period, which was 45 million 484 thousand 077.22 pesos, which were distributed in 17 works, the rehabilitation and modernization of the Luis Donaldo Colosio (Huites) dam, located in Sinaloa, was the one that obtained the greatest resources, a total of 6 million 806 thousand 664 pesos, followed by the Sanalona dam with 5 million 604 thousand 327 pesos in the same state. 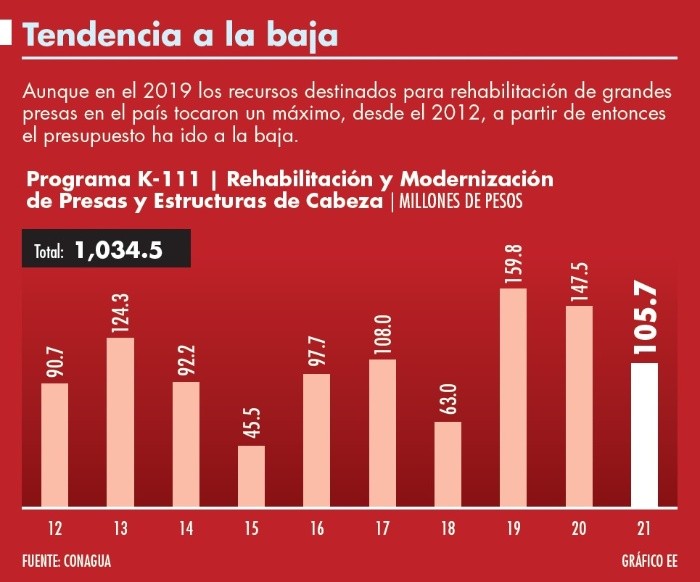 Against this background, Judith Domínguez, Coordinator of the Water Security Forum of El Colegio de México and Manuel Perló Cohen, researcher at the Institute of Social Research of UNAM, assured that the investment made by the federal government in these dams is very low.

“I think that those 1,034 million in a period of almost 10 years is little, because the maintenance they require is really expensive. (…) And the program that was destined to maintain the large dams is K-111, it is really very modest, ”said Domínguez.

The specialist indicated that natural phenomena such as rains and droughts highlight the lack of maintenance in some bodies of water in the country.

“Problems arise when there are extreme rains or droughts at the other extreme, you can see the real state of the dams, muddy and require that maintenance and that is not being done, “he lamented.

For his part, Perló Cohen explained that the lack of rehabilitation and modernization directly influences the loss of storage capacity of dams in our country.

“The lack of water is determined by the rains, by the storage capacity and also by the distribution systems, it is a whole chain that originates in the dams.”

Both specialists agreed that the vast majority of these large dams were built in the 1940s and 1950s, which are already at the limit of their useful life, since they considered that they have a durability of between 50 and 70 years of service.

However, they recognized that the solution is not the construction of new infrastructure works, except in some cases.

“We have to allocate a larger budget for maintenance, because it is a national security problem. With the rains we have had, if the gates break or do not work well in some dams, then of course it is a security problem ”, said Judith Domínguez.

You want to know more?

If you were interested in this news and want to know more, then download and discover INFORMAPlus, EL INFORMADOR’s digital application, where we have exclusive content, selected by our editors, to give readers a more complete experience.