With Sufjan Stevens you can believe in unicorns

Sufjan Stevens has done it again. He has re-created an album of those that sneak into the body until it is removed in a kind of magical whirlwind. It is true that this time he is not alone. Stevens has teamed up with Angelo De Augustine, an expert on fragile environments lo-fi of folk, to compose A Beginner’s Mind, but there is no doubt that his label marks from beginning to end a work destined to be one of the great albums of the year.

A Beginner’s Mind it sounds so deep that it’s hard to get out of it once it’s heard. There is something powerfully well mapped out in this work that catches getting tangled in the spirit during its idyllic journey. A journey that began with an already special starting point: Stevens and De Augustine decided to take refuge in a cabin in the woods to carry it out. They went to upstate New York and watched movies before writing. Some of these films were cult films, with death and murder as the common thread, such as The silence of the lambs, Point Break O Hellraiser III: Hell on Earth. Under the Zen Buddhist concept shoshin (beginner’s mind), without preconceived ideas and with enthusiasm for the amazement of what their eyes and ears perceived, they composed songs that sought to be like a redemption towards the contrast of images. 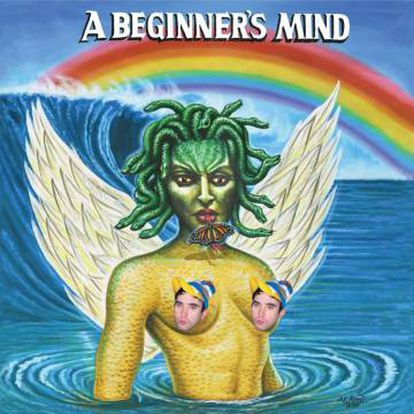 The result has been songs of maximum delicacy, linked in a bucolic, slightly psychedelic atmosphere, which at times recalls the best Elliott Smith, but has the stamp of an excellent alliance. Somehow, the set so well balanced and with such a defined soul, reminds Carrie & Lowell, the last great album by Stevens, one of the most interesting composers that the 21st century has given in American music. Outside of the orchestrations or electronic forays of previous works, highlighting their outstanding Greetings from Michigan: The Great Lake State, Ilinois O The Age of Adz, he turns to the acoustic instruments and the hypnotic whispering. A conscientious simplicity made with four hands. They blend voices, take turns in choruses, gently strum the strings and ensure that the harmony keeps a timid, suggestive reverberation.

Ethereal beauty, which requires a listener willing to let go. When Sufjan Stevens finds his best inspiration, it is as if the listener could believe in unicorns. The world to which it transports us is pure creative imagination.

Venezuela: The oldest man in the world is 112 years old, and he is Venezuelan