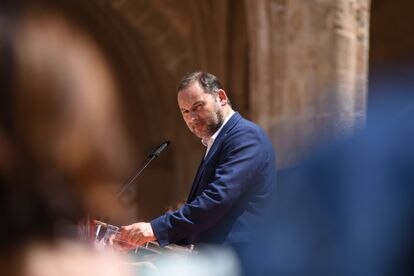 The then Minister of Transport and Secretary of Organization of the PSOE, José Luis Ábalos, last June at a ceremony in Valencia.Jorge Gil (Europa Press)

Without reaching the expectation that characterized them in the times of the manager controlled with remote control by Susana Díaz, when the internal stabbing between supporters and detractors of facilitating the investiture of Mariano Rajoy consumed the PSOE, the meetings that the socialist deputies held on Tuesdays have once again attracted the attention of political news. And all for a single protagonist: José Luis Ábalos.

Instead of diminishing with the passage of time, the questions that three months later surround the departure of the Government of the once all-powerful Minister of Transport and Secretary of Organization of the PSOE have only increased. “I neither know the reasons nor do I want to know them,” ditch a member of the federal leadership who emphasizes that Ábalos did not perform as expected his functions in the Executive and in the party. Other sources speak of attrition. “We don’t know anything, just that [a las reuniones del grupo parlamentario] he arrives alone and hurrying, from the last, he sits behind completely in one of the places that are free and leaves the first ”, says a parliamentarian who, like all those consulted, shares that Ábalos’ situation has become “A taboo” among the PSOE cadres. A cumbersome and delicate issue that, in the absence of data, deputies and senators avoid except in the strictest confidence.

Ábalos himself recognizes with reluctance that his surprising and hasty departure from the Executive has become a “classic” of the congressional bullies. And, although he attributes the lack of public explanations to the fact that his dismissal occurred in the context of a government crisis, with a dozen ups and downs, he acknowledges the impact of speculation, no matter how much he insists that he has nothing to hide. “It bothers me that a margin of doubt has been left about my departure,” he said at the weekend in the newspaper Levante. “I am very calm. What’s more, everything would have already come out. They have invented more than one, why not 21. I am absolutely calm ”, he said days before in Onda Cero. Meanwhile, in Ferraz the malaise has grown in recent weeks as Ábalos was lavish in the gatherings of different radio and television programs. The sources consulted believe that so much exposure is an error that contributes to feed the theories about his dismissal.

The first one who did not expect such an abrupt end was Ábalos himself. His environment fantasized about the idea of ​​taking over from Margarita Robles in Defense, in theory calmer and more manageable, but in no case with the remodeling of the Government taking him away. On the morning of July 10, a sunny Saturday, Sánchez was summoned to La Moncloa without knowing what was coming. Because he did not know, he was unaware that the affiliation campaign that he planned to present an hour and a half later had been canceled. Although he was still in charge of Organization, no one had communicated it to him. In practice, Santos Cerdán, his substitute, had been carrying out this work for some time in the most sensitive matters, such as the June primaries in Andalusia.

Since his ouster, Ábalos has not spoken to the Prime Minister again: another element for intrigues. “I understand it perfectly, in the same way that we talked a lot before, now we don’t do it,” justified the former Number Three of the PSOE, so decisive in the return of Sánchez to the general secretariat in 2017 that months before he organized a massive event in Xirivella to feel the atmosphere between the bases.

The appointment last Thursday of Ábalos as president of the Interior Committee of Congress ended his status as a low-level deputy and partly alleviated the rumors. The former first vice president, Carmen Calvo, received the same treatment, customary in the PSOE and the PP with her former ministers, and went on to chair the Equality commission. To the base salary of the parliamentarians, of 3,050.62 euros, they will add in this way a supplement of 1,551.58 euros per month. But with Calvo a naturalness is perceived with his peers on the bench. Not with Ábalos, despite the fact that he maintains many sympathies.

Another substantial difference is that Calvo continues to belong to the federal executive of the PSOE, where she is the secretary of Equality. Ábalos, despite his resignation as Secretary of Organization – his advisor Koldo García collected his things from the office on the fifth floor of Ferraz – continues in the WhatsApp group of the management, as confirmed by several of its members. “A la Orden”, is the message with which Ábalos presents himself, who has not participated in the group since before its fall. The sole administrator of the group, they point out, is Sánchez.

A testimonial paper in the 40th Federal Congress

Ábalos will attend the 40th Federal Congress, which the PSOE will hold in his city, Valencia, from October 15 to 17. But he will not do it as a delegate or as a member of the management. The organization plans to reserve a discreet role for you and interview you for a few minutes. Those who interpreted in the election of the headquarters a wink to who was one of the strong men of the Executive and of the party were wrong. “The departure of Ábalos from the Government has been rare, it squeaks a little,” acknowledged Óscar Puente, mayor of Valladolid. The aforementioned highlights that he has gained in quality of life and that the “harassment” suffered by him and his family by sectors of the extreme right was “unbearable.”

One of the highlights of the 40th Congress will be the staging of Pedro Sánchez with former presidents Felipe González and José Luis Rodríguez Zapatero, as well as former Secretary General Joaquín Almunia. The day before there will be another show of force with the socialist barons and ministers.