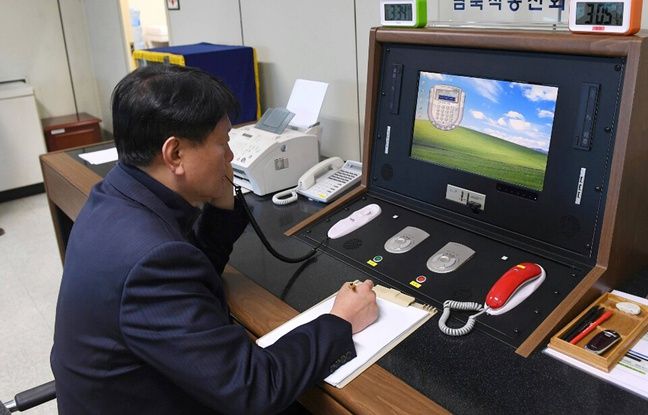 By promoting dialogue with his neighbor, Kim Jong-un aims no less than “lasting peace” on the Korean peninsula. To do this, North and South Korea have restored their cross-border communication channels, Seoul said on Monday, after Pyongyang cut them off in August.

Officials from the two countries took part in a telephone conversation on Monday morning, the South Korean Unification Ministry announced. “The government believes that, with the reestablishment of the South-North line of communication, a basis for the resumption of inter-Korean relations has been laid,” the statement said.

“The government hopes (…) to resume dialogue quickly and start practical discussions for the re-establishment of inter-Korean relations”, adds the South Korean ministry of unification.

North Korean leader Kim Jong-un had for his part “expressed his intention to re-establish the cut off communication channels between the North and the South,” the official North Korean press agency KCNA had announced a few hours earlier. These communications between Seoul and Pyongyang were cut off in August by North Korea, just two weeks after their recovery in a surprise thaw in relations between the two countries.

This resumption comes after a series of missile fire which raised many concerns and prompted an emergency meeting of the UN Security Council. North Korea also blasted this meeting on Sunday, Pyongyang accusing member countries of playing with a “time bomb”.

His eight dogs were mistreated, a Tarn hunter in court

Van Dijk (PvdA) not yet back in the House of Representatives, hopes for rehabilitation