The reckless world of virology

This week leaked a research proposal from 2018 to fight coronaviruses in bats. For example, the American and Asian researchers wanted to combat the risk of a coronavirus pandemic. They propose to vaccinate bats in their caves with some kind of broad agent against as many variants as possible.

The project required extensive wildlife sampling and a significant number of new coronaviruses to be added to the lab’s extensive collection in Wuhan. The researchers even suggest transporting live wild bats to the labs to try out the vaccines.

The leak is a new chapter in the exciting whodunit about the origins of the coronavirus. This group of researchers may have caused the current pandemic with their previous experiments with coronaviruses on bats. Something that all parties are sure to refer to the realm of conspiracy theories.

But it wouldn’t be the first time that fighting a virus actually leads to its spread. Foot-and-mouth disease is leaking from labs that research, develop or manufacture vaccines against it. The same goes for polio and SARS-1.

The proposal was rejected and that seems sensible. Whoever reads it gets the impression that the researchers have entered a competition of recklessness. Moreover, the scheme to vaccinate bats in the wild is both cumbersome and completely unrealistic.

There is also something absurd about it, because precisely these kinds of proposals with a far-reaching impact on the ecology of wild animals come from the so-called ‘Onehealth’ science – and it is precisely this science that pays attention to the intertwining of humans, animals, plants and planet. 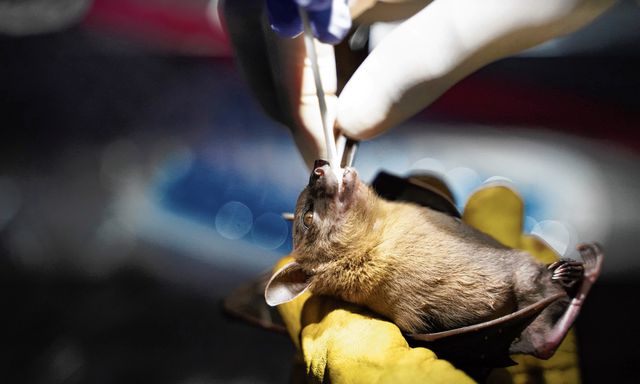 The public bickering about the origin of the coronavirus is full of noise; from racism towards Chinese researchers to ‘trust us, we’re the experts’-like texts from virologists.

One problem is that our obsession with genetic modification and “naturalness” shines through, when that is actually quite irrelevant. It matters little whether the coronavirus was the result of genetic tinkering or whether it just jumped off a bat. Whether the virus jumped off a bat or a bat monster. Whether that happened in a lab or in a cave, where a researcher would have been infected during a bat hunt. It is all far from ruled out. And that would mean that pandemic prevention research has actually put us all at risk.

The research proposal was concealed by all involved. Also, none of the top labs involved apparently had any difficulty with the proposed experiments. An external organization, the reviewers, had to be brought in to set the limit.

Meanwhile, there is no brake or limit to this type of risky experimentation. The Dutch virus researcher Ron Fouchier is repeatedly cited as an example. He investigated ways in which the bird flu virus H5N1, which kills about half of people after being infected, can infect people more easily. That just happened around the corner from me, in the Erasmus MC.

The commission sent to Wuhan by the World Health Organization (WHO) to investigate the origin of the coronavirus, including the author of the now-leaked 2018 research proposal, concluded it was “unlikely” that Wuhan virologists had a hand in the spread of the coronavirus.

But unlikely is not good enough. Even a tiny chance of a pandemic of this magnitude is unacceptable. The world of virology is more opaque and reckless than I thought. And the field is simultaneously more powerful and influential than ever. Who is stopping these experiments?

Rosanne Hertzberger is a microbiologist.

At the Cannes Film Festival, the president of the brand new TikTok jury resigns