“The pandemic is a great opportunity to build global solidarity”

Note to readers: EL PAÍS offers the Future Planet section for its daily and global information contribution on the 2030 Agenda. If you want to support our journalism, subscribe here.

Moncho Ferrer Perry (Anantapur, 1971) says that his father told him: “If I spoke Telugu as you speak, I would do miracles.” However, the now director of programs of the Vicente Ferrer foundation has witnessed, from a very young age, many “miracles” worked by his father, although there are some indelible in his memory.

Like that memory in which a tribal peasant, to whom the Indian Government had given the use of three acres of vacant land, without access to water, had the best banana harvest that is remembered in his community, and earned with it 300,000 rupees (3,495 euros). “My father helped him install a well and an irrigation system. This man came to our house, after the harvest, with a basket full of bananas, to give us, and another of money. And he would tell us: ‘Never in my life, nor in the history of our caste or of our people, has anyone achieved something like this. We have never touched so much money. ‘ It was incredible to see the happiness of this neighbor, accompanied by his family and the townspeople ”, recalls Ferrer, with a smile, sitting in the offices of the Vicente Ferrer Foundation in Madrid, on his visit to Spain. “We want to make possible what seems impossible for those who have never had a chance. This is how this family now has its own resources to support itself, pay for their children’s school … And we don’t have to worry about it anymore ”, he adds, waving his hands energetically and wearing a light blue kurta. 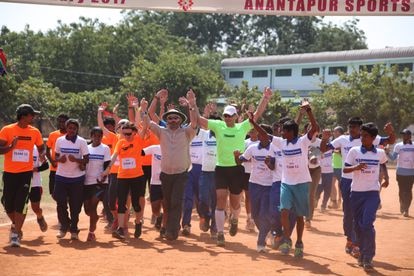 Moncho Ferrer participates in the ‘Anantapur Ultramaraton’ race that the VF foundation organizes every year in India.Jaime Ramos Friend

Since his father Vicente Ferrer died in 2009, Ferrer Jr., together with his mother Anna, took the reins of the foundation that bears his father’s name and that for 52 years has been serving the most vulnerable in India, with its headquarters main in Anantapur, Andhra Pradesh state. More than 2,700 people work there, benefit more than three million and support the needs of more than 3,000 peoples. And all this work, with one of the many tips his father gave him in mind: “Never give up (Never give up), no matter what happens, Moncho, we will never give up to our people (We will never abandon our people) ”, recalls Ferrer, with a mixture of fluent Spanish and English, the language they spoke at home, with his parents and sisters Tara and Yamuna. “Be his son [de Vicente Ferrer] for me it has always been something special, not a burden, it has given me strength to to be who I am (To be who I am). Things will happen (Things will happen), but we have to act and be able to handle many people in an organization like ours to face these moments, “says Ferrer, alluding to the second wave of covid-19 that hit India.

Ferrer, who defines himself as a quiet man, heard about the coronavirus on his penultimate visit to Madrid and Barcelona, ​​in February 2020, when the virus had not yet reached Spain, but had reached Italy. “In the first wave in India we lived in fear, because after what was happening around the world, experts wondered how countries like ours would deal with covid-19. However, the government closed very quickly, for fear of contagion, and we were able to have a manageable situation, ”explains Ferrer. “But after it started to break open, and we let the virus circulate freely for months, the second wave broke, and we went, as one of our doctors said, from the fear of hell.” The images of mass funerals, the hospitals that they manage overflowing with patients due to covid-19 and with the shortage of materials and oxygen that they suffered, are still stuck in Ferrer’s retina, just like the whole country.

When we let the virus circulate freely for months, the second wave broke out. We went from fear to hell

Currently India adds 25,000 daily cases of infections, of the more than 400,000 that occurred in the highest peak of the second wave. Regarding the vaccination rate, 47% of the population has received the complete guideline, followed by 17% who have only one dose. Ferrer, who considers that sometimes we have “a very short memory” to learn lessons from a health crisis such as the current one, believes that a “collective responsibility” is necessary to fight covid-19, and considers the release of patents essential of vaccines to end the pandemic. “It is not only a question of being able to manufacture them, but it is also necessary that the distribution be fast to all countries, not only to the richest. It has to be a joint struggle of the whole world and for this solidarity is needed. I believe that the pandemic is a good opportunity to build solidarity in the world ”, he says.

The aftermath of the pandemic

Ferrer knew what poverty and inequality were from a very young age. Her mother, Anna Ferrer, now president of the foundation, wanted her children to get to know her in the first person. One morning in Anantapur, when Ferrer was still a child, he and his friends, thirsty after having been playing, decided to go into a house to ask for water. Vicente’s son observed how they offered him a glass to drink, and the others, boys of the caste dalits —One of the lowest in India — the liquid was poured into his hands. “I understood that situation later, when I asked why this happened. But if you live there and you don’t notice the differences, I don’t know what you’re doing ”, a categorical sentence.

This chasm between castes and between rich and poor in India has been accentuated after the pandemic, a health crisis that has also jeopardized the economic stability of many families, having as the only resource to work informally and the increase of the orphans, who are threatened by human trafficking, abuse and labor exploitation. “There are many more children who have lost their father and mother, or other members to the covid. There is a lot of suffering because they do not have a secure salary at the end of the month and they have to go shopping and work every day. For millions in India, the situation during confinement has been terrible ”, laments Ferrer. The foundation distributed half a million food packages, about 10,000 a day, to the most vulnerable families during the first months of the confinement.

If you live in India and you don’t notice inequality, I don’t know what you’re doing

Other consequences of the pandemic, in addition, have also materialized in inequality among the youngest and in their education. “It is a human right, but still not everyone has received the same learning. On the one hand, there are those who go to private centers, who also had access to devices and have been able to follow their classes. And then there are those who have not yet been able to return to their school and do not have mobile phones or tablets to study ”, contextualizes the director of programs of the VF Foundation. Ferrer acknowledges that he himself has seen how his two daughters, especially the youngest, have suffered the confinement and how it has affected their mental health: “All day at home without being able to go out, without friends … It has been horrible for they, regardless of their social class ”, he assures.

For the Vicente Ferrer Foundation, with a history of more than 50 years behind it, the future is to introduce the environmental aspect in each of its projects, whether in programs focused on gender, education, health or the construction of houses. . “We have created a small group with professionals from Spain and India to see how we can integrate the environment within each of our sectors,” explains Ferrer.

“My mother is very clear that the sectors in which we must focus our efforts after the pandemic are gender, the environment and continue to build solidarity,” explains Ferrer, who recalls how he read a letter by Vicente Ferrer in which he said that Anna Ferrer was the true architect of the organization and that, without her, “all this was not possible.”

“Seeing a person without hope kills you. One of my father’s wishes was to give everyone the opportunity to live a decent life. When I go through the villages, many people remind me of what I said to them: ‘I want every poor family to be able to become a millionaire.’ And well, we can leave this world, as my father left, but dreams continue and we have continued to fulfill them ”.