It has never rained so much in 24 hours in Nantes 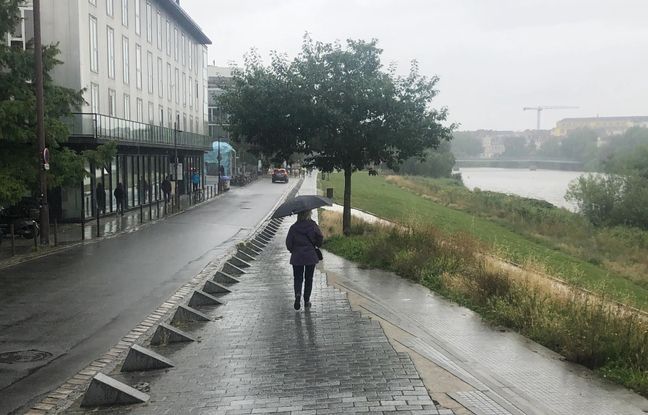 Yet accustomed to the rain, the people of Nantes have never seen it fall so much in the past 24 hours. While the Loire-Atlantique department was placed in red vigilance, on the night of Saturday to Sunday, nearly 100 mm of water were recorded, as announced. A figure never reached since the readings exist (1945), confirmed Météo France on Twitter this Sunday morning.

“Record confirmed for the weather station at Nantes (Bouguenais) airport over the 24-hour climatological period (from 8 am Saturday to 8 am Sunday): 96.7 mm. Beating the previous record (all months combined) on this time slot dating from July 7, 1977 (94.9) ”. Other records have been broken in the West, according to The Weather Channel.

Numerous absolute daily rainfall records were recorded in the north-west of France between Saturday 8 a.m. and Sunday 8 a.m. pic.twitter.com/WDK6c3Zs42

A portion of the flooded periphery

This precipitation, which corresponds “to about a whole month of rain”, is accompanied by some inconvenience, even if the situation seems under control. As one might expect, the ring road is flooded in the interior between the gates of Gesvres and the Chapel, according to Bison Fûté. “Some roads in the Nantes area are flooded”, also reported the prefecture during the night, referring to “some tree falls on the road”. Closed since Saturday 2 p.m., the parks and gardens have not yet been authorized to reopen.

Loire-Atlantique firefighters announced in a press release at 7:30 am that they had carried out “113 interventions linked to the rainy event”, in particular flooding of premises or falling trees. Still in the department, 803 homes were still without electricity at the start of the morning, according to Enedis.

The reckless world of virology

Weather in Zapopan today: the forecast for Sunday, October 3, 2021

Weather in Zapopan today: the forecast for Sunday, October 3, 2021