Bullfighting pandemic (and 5): the bitter and uncompromising controversy over subsidies produces more fear than the bull

If talking about money is in bad taste, talking about the official subsidies that bullfighting receives is a taboo subject for bullfighters. Many feel uncomfortable and a feeling of guilt assails them for the fact of receiving an economic amount in exchange for organizing a bullfighting celebration in a locality.

A recognized businessman who manages the square of an important Madrid town told this newspaper his reluctance in this regard.

Question. Do you receive any municipal help for the organization of the fair?

Answer. “Yes, but I do not know if it is appropriate to say it or not, as the anti-bullfighting men are with this matter.”

One of the few who face the situation naturally and not without courage is Victorino Martín, president of the Toro de Lidia Foundation. He outright refuses to speak of grants and considers that they are “allowances in exchange for the provision of a service to the community.” “The festivities in the towns are organized around music, fireworks and bulls,” he adds, “in many of them there will be no fairs this year, and the bullfighting celebrations will be the only festive celebration.”

Nor are the municipalities and their mayors an example of transparency on the budget items dedicated to bulls.

One of the exceptions is the socialist Miguel Zamora, first mayor of the Albacete town of Tarazona de la Mancha, who has no qualms about recognizing that his municipality dedicates 15,000 euros to organizing a bullfight and a bullfight at its annual fair that is held. in the middle of August. “Despite the restrictions, this has been the year that more spectators have come to the square in the last decade”, he explains, “perhaps because the leisure offer has been reduced”. “And since we have all adjusted expenses, it has been a good business for the businessman,” he concludes.

Tarazona is not the only municipality that collaborates with the bullfighting festivities. Another example is Casas Ibánez, also in the province of Albacete, which on August 28 held a bullfight with the presence of El Juli, Miguel Ángel Perera and Paco Ureña, and had a help of 15,000 euros from the City Council and another amount of the same amount contributed by the local bullfighting club.

Juan Medina, professor of Economic Theory at the University of Extremadura, and the most recognized scholar of the economic variables of the bullfighting festival, prepared in 2013 a report for ANOET in which he points out that 2,767 of the 8,700 Spanish city councils organized festivities that year in its different modalities and contributed 20,116,278 euros, 1.4% of its cultural budgets. It so happens that 83.4% of municipal aid was dedicated to popular celebrations, and only the remaining 16.6% to regulated celebrations. And one more detail: the municipalities recovered three million euros through leasing fees or direct management of publicly owned squares.

On June 14, 2020, this blog pointed out that eight autonomous communities (Madrid, Andalusia, Extremadura, Castilla y León, Castilla-La Mancha, La Rioja, Murcia and Navarra) contributed 7,568,180 euros; and the councils of Badajoz, Castellón, Palencia, Albacete, Malaga, Guadalajara, Salamanca, Zaragoza and Valencia spend 3,296,498 euros. From these amounts it is necessary to subtract what these administrations received for the rent of their respective places, which amounted to 3,433,306.9 euros. What was contributed by the CC AA was 4% of the more than 80 million dedicated to the cultural area, and 1% of the councils. 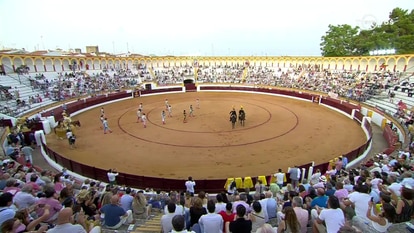 Likewise, and due to the pandemic, the communities of Andalusia, Madrid, Aragon, Castilla y León, Extremadura, Navarra, La Rioja, Valencia and Aragon have approved budget items to help cattle ranchers especially affected by the coronavirus.

Of course, the bullfighting festival has official subsidies as a cultural sector recognized by law; It happens, however, that, despite the strong offensive of the sectors opposed to bullfighting, the reality is that the aid is ridiculous, offensive, unfair and disproportionate with respect to the economic activity that the festivities generate and the tax revenues that they contribute to the Treasury.

The most scandalous example is the bullfighting game that the General State Budgets collect: 65,000 euros (30,000 for the National Bullfighting Prize, and 35,000 for the Toro de Lidia Foundation).

The Real Maestranza de Sevilla dedicates 84 percent of what it receives from bulls to a huge charity, social and cultural work

In return, and according to the study by Professor Juan Medina referring to the 2013 season, the State received 45 million euros in VAT, an amount significantly higher than that received by other cultural industries, and more than 12 million in social contributions.

Medina concluded that “bullfighting activity is not only the least subsidized, but the one that generates the most wealth for the Treasury.”

Another example is the Plaza de Las Ventas, which is public property. Its owner, the Community of Madrid, has received in the last 15 years as rent the amount of 52 million euros. Although the regional government allocates funds to the bullfighting promotion and the care of the bullring, its real investment is very far from what it perceives.

A paradigmatic case is that of the Real Maestranza de Caballería de Sevilla, owner of the bullring in the capital. This private institution receives around 22 percent of the turnover of each celebration, and dedicates 84 percent of that annual income – between one and a half million and two million according to the average of the last six years – to a huge charity work , social and cultural, ranging from a soup kitchen to aid to religious orders and NGOs, the restoration of artistic assets and university awards.

And another case: the Diputación de Málaga, owner of the bullring of the capital, this year gave the organization of the bullfighting fair to businessman José María Garzón, and agreed that the rent would consist of the payment of one euro for each ticket sold that would go to the El Pimpi Foundation and the Little Sisters of the Poor.

In short, this bitter and intransigent controversy of subsidies, constantly aired by sectors opposed to the party, is plagued with half-truths, many lies and excessive manipulations.

Subsidies exist; of course they do, but the truth is that they do not correspond in any way to the economic and cultural importance of the sector.

Sexual violence by WHO workers: EU and US call for “rapid change” within the organization