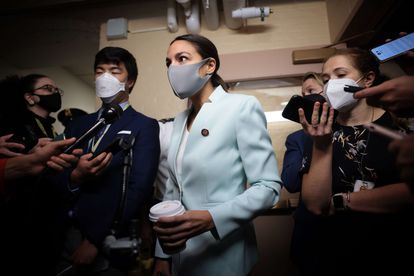 Democrat Alexandria Ocasio-Cortez, representative of the progressive faction, this Friday in the Capitol.WIN MCNAMEE / AFP

President Joe Biden doesn’t lift his head. In just a month, the veteran Democrat has suffered several setbacks that, added together, would be enough to derail any agenda: a pandemic unleashed again by the delta variant; fear of inflation; the disbandment of Afghanistan, and a diplomatic conflict with France and the EU, in addition to the umpteenth migration crisis. Added to this is the friendly fire of his fellow Democrats. The division between progressives and moderates has turned into open war this week due to the processing of the two infrastructure plans that constitute the DNA of his presidency. With low popularity ratings, Biden has the enemy at home.

Since mid-August, with the collapse of Afghanistan, the president has been experiencing shocks; too many, comparatively, to have been in the White House for just eight months. The beats in the wheels of the Republicans have been, stopping among other initiatives the police reform, or rulings of the Supreme Court, such as the one that sanctioned the restrictive anti-abortion law of Texas and that the Democratic Administration intends to reverse. But these setbacks are nowhere near as damaging as the fratricidal divide that fractures the Democratic party, and which became apparent Thursday with a lockdown that forced a vote on the $ 1.2 trillion physical infrastructure plan to be postponed, despite have bipartisan support. The vote, theoretically rescheduled for this Friday, reflects the bitterness between progressives and moderates or centrists. While the former intend to advance the aforementioned plan and another complementary one, of social and environmental coverage and a planned investment of 3.5 trillion dollars, the latter refuse to link its development and also intend to reduce the latter’s spending on two trillion dollars. The blockade is of such a caliber that Biden himself, who during the week has reduced his pro-party agenda to a minimum, planned to approach the Capitol this Friday to reconcile positions.

Meanwhile, President Biden, who was a senator for more than three decades and is accustomed to hoaxes and political fights, sees his popularity rating plummet, to a minimum after the chaotic withdrawal from Afghanistan. In September, with a fall of seven points, only 43% of the population approved his administration, compared to 51% of discontent. In the latest survey, also commissioned by NPR / PBS, it scratches a couple of positive points, up to 45%. Nothing to do with the endorsement with which he assumed the presidency.

Still, the support index is not as revealing – Vice President Kamala Harris’s has been corrected only in recent weeks, for example – as the fight to the death between moderates and progressive Democrats. It was an open secret, more patent in states like New York, a test bed for the future of the party; but the declaration of war has not been evidenced until now. Beyond the the spy is clear concrete infrastructure plans, the two souls of the party confront each other on the battlefield: that of the establishment, represented by political veterans, white and in their sixties at best, when not older, and the replacement, embodied in a generation of racially diverse thirty-somethings, newcomers to politics and wanting to change the world (and without compromise with the lobbies, like many of its antagonists). Except for Bernie Sanders, the veteran senator from Vermont who serves as a mentor to progressives, or Senator Elizabeth Warren, another warrior on the left, between one faction and another there are racial, generational and, of course, ideological fault lines.

The disagreement had been evident previously, for example in the stubborn rejection of the progressive faction to the hypothetical confirmation of Jerome Powell for a new term at the head of the Federal Reserve, at the proposal, among others, of prominent Democrats of the other side or by Janet Yellen, the Secretary of the Treasury. But perhaps the episode that best defines the division between the two halves of the party is a minor vote, such as the allocation of $ 1 billion in aid to Israel to modernize the Iron Dome anti-missile system. On September 22, the pressure of the progressives managed to overturn said provision in a fundamental vote, that of a bill to keep the federal government financed until December 3, which this Thursday became law, avoiding the closure of the Administration. A week later, the aid to Israel was approved, as a law detached from the initial project and not without controversy: Alexandria Ocasio-Cortez, the best-known face of The Squad (the squad) or media vanguard of progressives, abstained in the vote , provoking criticism from many of his co-religionists. The recognition of the right to defense and security of Israel is in the DNA of the democrats … or rather, of the old establishment democrat.

On the moderate or centrist camp, two senators, Joe Manchin and Kyrsten Sinema, dominate the spotlight. The first called on Wednesday “fiscal insanity” the multimillion-dollar endowment planned by the White House for the two infrastructure plans, almost five trillion dollars in total. On Thursday he made his counter offer for the social program and minutes later, the planned vote derailed. Biden’s social program includes an ambitious battery of actions against climate change that do not satisfy Manchin, linked to the lobby of the oil industry, as the progressive wing constantly reminds us. Two days before Thursday’s frustrated vote, Sinema organized a fundraising event for his campaign with five lobbyists opposing Biden’s plan. Progressive idealism or business as usual, facing.