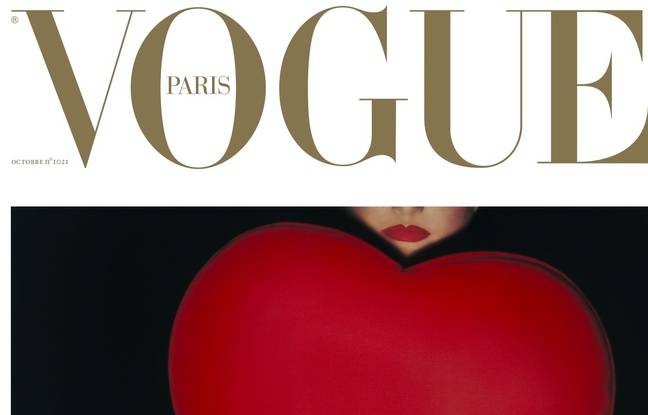 100 years is worth celebrating! Launched in 1920 under the leadership of Condé Nast, Vogue Paris magazine celebrates its century of existence with a special October anniversary issue, which comes out a year late due to the Covid-19 pandemic, a few days before the opening of an exhibition “Vogue Paris 1920-2020” at the Palais Galliera.

At the opening, an editorial signed by the former editor-in-chief Emmanuelle Alt, thanked after ten years at the magazine as part of the
reshuffle by Condé Nast last summer, and a text entitled “Breathe”, initially published in the January 1945 issue, by Germaine Beaumont, French journalist and first female winner of the Renaudot Prize.

Guy Bourdin on the cover

On the cover of issue 1021, a photograph of Guy Bourdin dating from April 1979 with a bold red heart with Vogue Paris and “100 years” (or “100 years”) in gold leaf, was chosen to echo the central idea the number according to which “the archives [sont] the heart of a magazine, its backbone, its words that remain for eternity. They are his voice, his secrets, his deep secrets that they share with you, ”writes Emmanuelle Alt.

This issue traces the great moments of fashion through archives and iconic photographs by Helmut Newton, Irving Penn or Guy Bourdin “who helped shape his identity and his spirit”. “The greatest photographers in the world are in Vogue Paris and we could have done 100 numbers to celebrate its 100 years. It is the eye of Vogue quite simply, this particular glance which it carries on time ”, continues the ex-editor-in-chief.

The 420 pages of this anniversary issue are also punctuated with archival texts signed by the great names of French literature such as Simone de Beauvoir, Françoise Sagan or even Jean Cocteau.

In addition to this magazine, there is a supplement dedicated to Yves Saint Laurent and his heirs. The 420-page issue and its supplement are priced at 6.90 euros, and will remain on sale for two months.

A retrospective at the Palais Galliera

The oldest French fashion magazine still published, and the only title of the group to bear the name of a city and not that of a country, will also celebrate its anniversary through a retrospective at the Palais Galliera in Paris, which will take place will be held from October 2, 2021 to January 30, 2022.

A special place will be reserved for the icons who have embodied the Vogue woman from Brigitte Bardot to Catherine Deneuve via Kate Moss, Jane Birkin, Laetitia Casta and Naomi Campbell. There is also room for the younger generation with Kaia Gerber, the Hadid sisters, Jill Kortleve, Valentina Sampaio or even Malika Louback.

“The exhibition testifies to the capacity for creation, adaptation and anticipation which, for 100 years, characterized the magazine”, writes the museum on the presentation page of the exhibition.

Within a chronological journey, the exhibition will also return to the magazine’s loyal couturiers, Yves Saint Laurent and Karl Lagerfeld, whom the magazine has supported and followed throughout their careers.