Tilda Swinton, before the Colombian drama 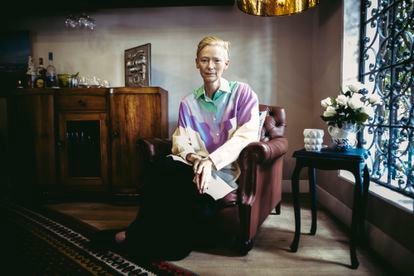 Tilda Swinton, during the interview with EL PAÍS in Bogotá, Colombia, on September 27, 2021 Ivan Valencia

A weak light illuminates the room. The furniture is made of leather and oak wood. The world seems suspended for a few moments. The atmosphere, however, is electrified by the arrival of Tilda Swinston. It is clear that her marble statue beauty has entered the room. He wears a long shirt in gaudy colors, his hair slicked back. The Scottish actress has a sharp, almost androgynous profile, like that of human civilizations portrayed in futuristic films. By surprise, his first words are very earthly: “Last week I was in Chinchón (Madrid, Spain). A very beautiful town ”.

Swinton, 60, opens in theaters this week Memory, a film of difficult classification directed by the Thai Apichatpong Weerasethakul. Obviously it is a Colombian film, although neither the director nor the protagonist are. The production is, and in fact it has been shot in Medellín, Bogotá and the rural municipality of Pijao. The actress plays Jessica, an English expat who runs an orchid business. The woman visits her sister in the hospital, where she remains admitted for a strange respiratory ailment. That night, Jessica wakes up suddenly after hearing a dry sound, a kind of popping sound.

She describes it as the impact of a concrete ball that falls into the sea. A soundman, in a mixing room, finds it similar to what a baseball bat hits a human body. The whole film by Weerasethakul, a radical director who claims to have found in the bowels of Colombia the same kind of pain and tragedy as in his native country, revolves around the mystery of that sound and its origin. Three-quarters of the same thing happens to Swinton.

Beneath the iceberg, the hidden, the underground civil war that the country has suffered in the last half century. “That’s the engine of the movie,” Swinton concedes. “If you are someone very sensitive (like Jessica) you can tune in to this trauma and make life difficult, almost impossible.” The director and actress came up with the film for 10 years, just a sketch at the beginning, long before they knew where it was going to be shot.

The night before meeting Swinton, Memory it was screened in an old cinema in Bogotá. At the end of the pass, Weerasethakul grabbed a mike and confessed:

“Not many people go to see my movies.”

The 51-year-old director recalled that he decided to delve into this story after a retrospective of his work, which he received the jury award at Cannes, the Cartagena de Indias International Film Festival. At that moment he thought that he was old, that this tribute was a sign, the end of something. And this is the place to start something new, he told himself. In those days, Weerasethakul himself heard sounds in his head. 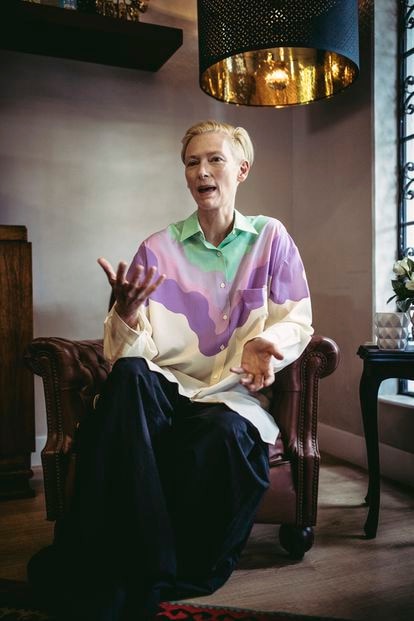 The British actress and model, Tilda Swinton, during an interview in Bogotá, Colombia, on September 27, 2021 Ivan Valencia

The noise is almost impossible to recreate and perhaps that is the story, the impossibility of reaching the source. The Thai later visited Bogotá and says he found many reasons for sadness. “I tried to connect with this land. I was impressed by the character of the country, both physical and mental. I tried to get into it. I spoke with psychiatrists, mental patients, I began an exploration through sound. The movie is a collage of memories ”.

Swinton hates being called an actress. It simply says it is not. In any case, she is an interpreter, an artist. In every movie she embarks on, she wants to explore something about herself. “In these ten years that it has taken us to do it, things have happened to me. Joey (as he affectionately calls Weerasethakul) suffered from those bang in his head and had insomnia. For my part, I suffered the loss of my parents. In this story we can reflect the pain that we drag, which takes you to a state of suspension, as if you saw life through a glass ”, he adds.

But not everything he has found in Colombia is darkness. He recognizes a black humor of Colombians that reminds him a lot of Scottish, in addition to the desire to dance and party. “That is wonderful”.

She has become the muse of the most daring directors, such as Weerasethakul himself, Bong Joon-ho, Luca Guadagnino or Wes Anderson. With the latter he has been recording in Chinchón, the mystery remains unveiled. “That’s because I’m cheap,” he jokes. In fact, it is because he is involved on the same level as the authors, as if his life depended on it. “I like to get involved in everything and work collectively. I suppose that is why they are looking for me ”.

One of the last to integrate it into his cinematographic world was Pedro Almodóvar, of whom Swinton speaks highly of. She is the protagonist of the first film in English by the Manchego. “It’s like Hitchcock asked me to work with him. I know all his work, it has been one of the blessings of my life. Also, look how I look … ”.

The truth is that no, she is not the prototype of the Almodóvar girl. She seems more like coming from space.

Subscribe here to the newsletter from EL PAÍS América and receive all the informative keys of the current situation of the region.