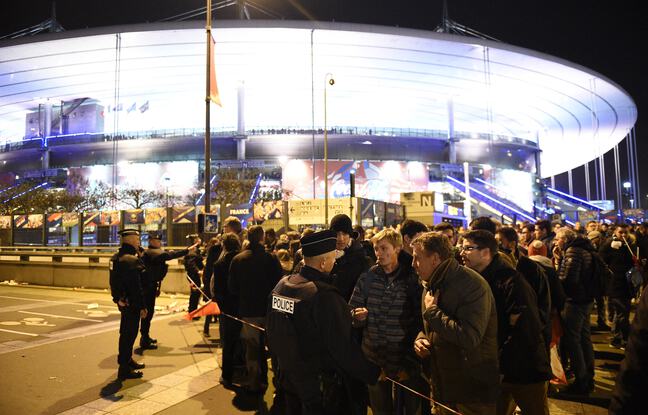 To the specially composed assize court in Paris,

It took six years for Marylin to know the exact distance that separated her from the first suicide bomber who blew himself up on the evening of November 13, 2015 near gate D of the Stade de France. 17 meters. It is by following the debates at the trial of the attacks that the thirty-something discovered it. Six years after the terrorist attacks, and after so many years of silence, the young woman delivered to the court the story of “her shattered life”. Freelance journalist sent to the Stade de France to interview German supporters on the occasion of the friendly match which took place there that evening, the young woman was injured in the face and legs.

Like her, several witnesses, relatives of the victim or first responders recounted the “shock wave” caused by the attack. The wave of physical shock then the psychological explosion which sowed “terror” in their private, family and professional spheres. The first civil parties to take the stand since the start of the hearing, all of them insisted on the need to “remember” these events which occurred at the foot of the sports arena and too often “forgotten”.

The memory of a “loving” father

If Sophie Dias came this Tuesday before the specially composed assize court in Paris, it is so as not to forget the only one missing in this attack. Hit by the nuts contained in the explosive belt of one of the terrorists, his father, Manuel Dias, was the very first victim of this night of terror. At the helm, her daughter carries the memory of this “loving papa hen” who “pampered her”. “He was the bon vivant, the agitator of family reunions who called me several times a day to check on me. The one who supported me in my projects, who got up in the middle of the night when I went out at night and did not come home, ”describes the young woman.

Traveling to Portugal on the evening of November 13 to organize her upcoming wedding, Sophie Dias moves heaven and earth to get news from her father, whom she knows to be at gate D of the stadium. In the evening, the Consulate and the Embassy assured him that he was not on the list of victims. But the ax falls the next day at noon. “The world is collapsing” and the “obstacle course begins” for the family of Manuel Dias who “have been fighting for six years” to obtain compensation equal to their damage.

The memory of the wounded soldiers

Jonathan bears the memory of his comrades gendarmes – all members of the same cavalry regiment – “abandoned” by their hierarchy. That evening, this captain was tasked with twelve other soldiers to secure the surroundings of the Stade de France. When the explosion occurs, his troops are the first to intervene. Philippe, now retired major of the gendarmerie sees the lifeless body of Manuel Dias and the human remains of the suicide bomber. Despite the shock, the men of the regiment took charge of the first wounded, gave the alert to other security forces and tried to “freeze” the premises. Until the second explosion.

“At that moment, I am in a state of astonishment, I remain without doing anything, I am in transit, I remember having lowered the head”, remembers Jonathan. Summoned to “clear” by the commissioner in charge of security after the arrival of reinforcements, the gendarme alone takes charge of his teams when they return to the regiment. Immediately, the captain organized a salutary “debriefing” but insufficient for his soldiers who were then “in a daze”. Renaud, head of the cavalry will take “an hour to unlock” before being able to speak to his wife. Pierre has “trouble sleeping”, “trouble eating” and ends up being hospitalized for a month in a psychiatric ward. Confronted with the post-traumatic stress of his teams, the captain tries to alert his superiors. In vain. “I have the impression of having been alone, in front of the unknown and in front of the incomprehension of my direct leaders”.

The memory of a “shattered” life

To remember her stigmata, Marylin brought to the bar the 18-millimeter nut that infiltrated her right cheek on the evening of the attack. “Halted” by the first explosion, the young woman with curly hair manages to flee, driven by an instinct for survival. “I said to myself: ‘Oh goddamn bomb, oh goddamn bombing, oh goddamn I’m alive, I have to get out of here.’ Operated and then hospitalized for three days, Marilyn’s whole life “shattered” after the attack. Like the soldiers who intervened, she developed “all the symptoms” of post-traumatic stress: “hypervigilance, fear of everything (…) I could hardly get out of my house and take on my daily life”.

Despite everything, Marylin advances. She completes her reconversion started in the humanitarian, finds a job, becomes pregnant. But his relationship with his companion is damaged: “I had become angry, I was farting cables.” And his career struggles to evolve: “I took a financial position at the bottom of the ladder (…) And even that was too hard”. Today, the thirty-something says she takes “one thing at a time”: “I hope that by testifying today, it will also give me the words to one day explain to my daughter who is now three years old what happened to me. She didn’t ask for anything and to learn that her mother was hurt psychologically and physically, it’s hard ”.