The internal negotiation of Budgets lengthens: Yolanda Díaz says that they will be cooked “over low heat” The Second Vice President and Minister of Labor, Yolanda Díaz; the head of Territorial Policy and Government spokesperson, Isabel Rodríguez; and the Minister of Inclusion, José Luis Escrivá, after the meeting of the Council of Ministers, this Tuesday in La Moncloa.JJ Guillén / EFE

The internal negotiation of the Budgets will not be as fast as the socialist sector thought. Nadia Calviño said they would be ready this week or next, but the agreement for the moment is far away. The second vice president, Yolanda Díaz, said on Tuesday that at the moment “there is no agreement” and that this matter “will simmer”, thus rejecting the times that the socialist sector was trying to set. At the moment, the negotiations are not progressing, and everything indicates that they will have to be unblocked by Pedro Sánchez and Díaz herself in a conversation this week or next. The calculations they handle in La Moncloa already point to the week of October 11, not to leave them for the second half of this month like last year, when the Congress regulations had to be stretched to speed up the procedures as much as possible. In theory, the Budgets should be ready by the end of September. 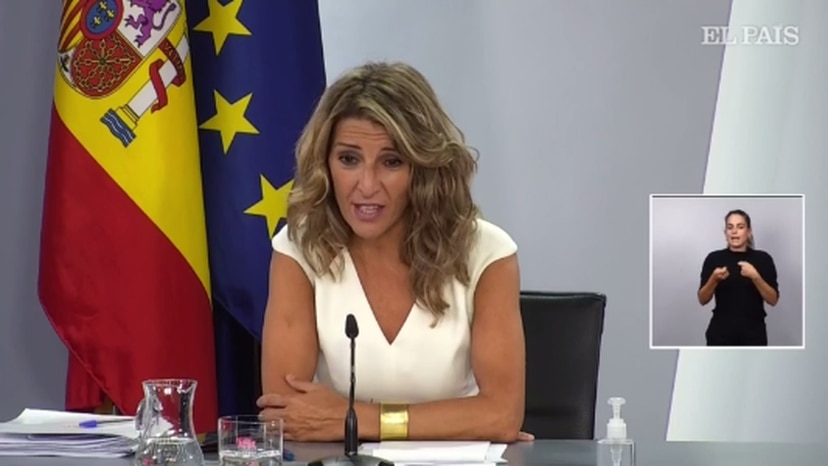 Statements by the second vice president, Yolanda Díaz, this Tuesday on the budget negotiations.

The PSOE and United We Can, with the Minister of Finance, María Jesús Montero, at one side of the table and the economic head of United We Can, Nacho Álvarez; and Yolanda Díaz’s Chief of Staff, Josep Vendrell, on the other, have been trying for several weeks to reach a global agreement with several milestones, including the minimum 15% effective rate on corporate tax, something that only affects large companies. companies – small ones already pay more -, but it represents an important change in the line of “fair recovery” of which the Executive speaks.

Although this milestone of 15% has not yet been agreed between the negotiators, sources from the socialist sector assume that Sánchez will finally concede this trick to Díaz, because it is a matter that the president himself has supported internationally and included in his speech in the UN last week. The president actually left the door open, at a press conference in New York, and the first vice president, Nadia Calviño, also opened it in an interview in EL PAÍS.

If the Socialists agree to include this 15% in this year’s Budgets, which would imply a tax increase for large companies already in 2022, the agreement would be quite close, because until now La Moncloa flatly refused to touch taxes in an important way this year, before the committee of experts that has been created to study the tax reform is pronounced. However, 15% is not the only stumbling block for the agreement, although it does represent an important negotiating asset for Sánchez if he finally agrees to include it this year.

The other major milestone is housing and the negotiation, which has already come from last year’s Budgets, of a mechanism to limit the increase in rental prices. The housing law is eight months behind schedule and the upward pressure on some rents due to the economic recovery is putting it back in the forefront. For Unidos Podemos it is fundamental, and in fact this is a particular negotiation that the Minister of Social Services, Ione Belarra, leads directly with her usual interlocutor in the Government before and after the remodeling, the Minister of the Presidency, Félix Bolaños.

The positions are still far apart, although there are many documents and alternatives on the table to try to find an intermediate position. Along the way, the responsible minister, José Luis Ábalos, and even the secretary of state who most directly led the negotiation, Pedro Saura, has changed. This agreement is basic to close the Budgets.

Another of the complicated issues in the negotiation is pensions. United We can demand a revaluation of the minimum and non-contributory pensions well above the growth of the others, and there is also discussion about the revaluation of all the pensions that it will approve for 2022, at a time when inflation is skyrocketing afterwards years practically stagnant. They also demand a universal “parenting benefit” of 100 euros per month for all mothers with children from 0 to 3 years old, whether they have work or not, in addition to extending paternity and maternity leave to six months.

This negotiation will be especially complex not only with United We Can, but also with ERC or the PNV because in the political world the idea is installed that these could be the last Budgets of the legislature. Now all the interlocutors consulted take it for granted that there will be Budgets, and no one will break the deck, not even ERC, because there are incentives for everyone with the enormous flow of money to make investments and make substantive political decisions. “We are working to have the Budgets in time and form. We could not forgive ourselves for not being able to execute the funds that we have given ourselves. They are the Budgets that respond to the fair recovery. We trust in the work of the Minister of Finance, ”declared the spokeswoman, Isabel Rodríguez.

However, in 2022 things will be more difficult, because the elections will be very close in the event that they are not advanced. So all the groups, from Unidos Podemos to ERC or the PNV, want to squeeze the most in the negotiation because it could be the last one before the next elections. UP sources view the blockade with “concern” and consider that the PSOE has “accommodated” and has neglected both the coalition and the majority that supports it in Parliament. Sánchez’s environment, on the contrary, transmits a lot of tranquility and even ensures that there will be Accounts also in 2022. Díaz did make it clear that his group works with the scenario of an agreement. “It is clear that we have not reached an agreement. I’m sure there will be an agreement. Peace of mind and patience, but it is evident that there is no agreement ”, declared the second vice president. This week and the next are therefore the most relevant for the great political agreement of the remainder of the legislature, which will mark the path of the coming months.

Shortly after, another transcendental will arrive: the labor reform. Díaz and José Luis Escrivá, Minister of Inclusion, who appeared jointly, claimed the sixth extension agreement of the ERTE with employers and unions. But the employers have been left out of the agreement of the increase of 15 euros of the minimum wage. “I feel very proud to be part of a government that not only comes out of this crisis by cutting rights and lowering salaries, but by raising them,” said Díaz when comparing this exit from the crisis with a progressive Executive at the helm with that of 2012 with one of the PP. But this precedent of removing the minimum wage without an agreement from the employers opens a question: will the Government be willing to carry out the labor reform without an agreement with the employers? Neither the PSOE nor United We can want that scenario, but while Díaz’s group does seem willing to move forward with or without businessmen, the Socialists have many more doubts and will push the maximum for the CEOE to be there. After Budgets, it is the most difficult and relevant negotiation of the next few weeks.

Escrivá revolts against criticism: “They didn’t read my interview”

It is not the first time that the Minister of Inclusion, José Luis Escrivá, provokes a political fire due to his statements in particular about pensions. However, the minister is convinced that the problem is not his, but of those who criticize him, because in his opinion his statements have not been read and they speak from hearsay. He has already answered this way on other occasions before several controversies and today he has done so emphatically and twice in the round after the Council of Ministers with Yolanda Díaz at his side, one of the people who asked him for “prudence” and therefore indirectly criticized your statements. Escrivá was even answered by the deputy secretary general of the PSOE, Adriana Lastra. But the minister does not change a single of his words and maintains that the only problem is who criticizes him for not knowing how to interpret what he said. “Whoever has read the interview, which I think has been few, you will understand. I was talking about people in their 55s who lose their jobs due to early retirement. We have to change the mentality so that no one is in a situation of precariousness and uncertainty and without having a full active life at those ages. That is what I said. And in this matter we all have to be more than cautious belligerents, ”he replied when asked if he shared Díaz’s words that it was necessary to be cautious.

The second vice president smiled as the minister was asked the question. She herself wanted to end the controversy after Escrivá insisted that “the entire current framework of the retirement age is maintained” in the reform that will be approved this Thursday. “The minister has been clear,” Diaz closed. Escrivá tried to focus the shot on the PP, and especially on the words of former president Mariano Rajoy, who the day before had indicated that Pablo Casado, when he comes to power, will have to change the current pension reform. “I suppose you will have to change it. So, they may strike you again, but you won’t have another one, “Rajoy told Casado. Escrivá called on the PP to support the current reform, much less harmful to pensioners than that of Rajoy in 2013, and agreed with businessmen and unions.

But when asked again for his words on voluntary retirement at age 75, Escrivá recovered his thesis that the problem is that they have not read him well: “Some reactions have been manifested without knowing exactly what I had said” . Diaz was still smiling at her side.

Loiret: a minor in custody after a false bomb threat in a college