After six years of waiting, the Council of Ministers approved this Tuesday the credit line of 36 million euros for the expansion of the Prado Museum through the rehabilitation and museum adaptation of the Salón de Reinos. The Government, as stated in the agreed text, makes use of a legal formula by which this amount will reach the museum without it being necessary for it to be approved in the General State Budgets, still in full negotiation. In this way, the Prado will finally be able to execute the work projected by the studios of the British architect Norman Foster and the Spanish Carlos Rubio, winners of the public tender in 2016, a year after the Mariano Rajoy Executive approved the extension. 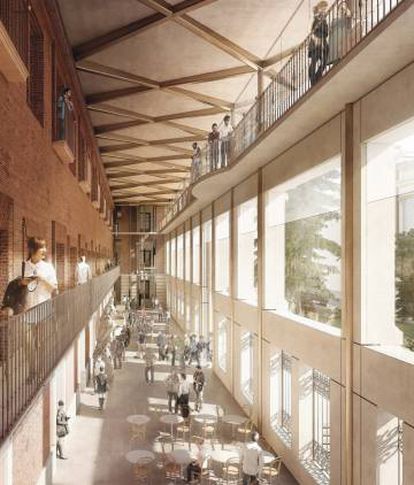 Simulation of the interior view of the new atrium of the South facade.

Originally scheduled for 2019, the rehabilitation work was postponed until 2024 due to the complicated political situation in recent years. A date that now changes. The building to be transformed was the headquarters of the Army Museum and is located next to the Casón del Buen Retiro, in the vicinity of the Prado. They are the last remaining vestiges of the Royal Palace of Buen Retiro, a complex erected between 1633 and 1639 under the reign of Felipe IV on traces by Giovanni Battista Crescenzi.

The urban reorganization of the project, called Campus Prado, will connect the Prado and the Salón de Reinos, facilitating the transit on foot of visitors through Felipe IV street and joining in the same complex the buildings of Villanueva, Los Jerónimos, Casón del Buen Retiro and the Salón de Reinos. The expansion works will gain 2,500 square meters of exhibition space for the gallery. 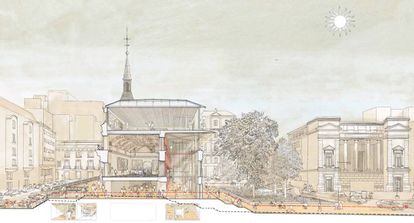 Cross section of the project showing the permeability of the North-South axis.

The current appearance of the façade of the Army Museum, which was intervened in the late 19th and early 20th centuries, will be modified, as will the roof, which will also be renovated. The intention is to recover its seventeenth century appearance and the baroque splendor of the protected Salón de Reinos, under whose towering ceilings Felipe IV received foreign ambassadors with the intention of intimidating them, surrounded by canvases such as The Surrender of Bredaby Velázquez. A large exhibition area will be set up on the third floor. The artistic program has not yet been decided, although the purpose that was raised when the project was announced is to present long-term transversal and temporary exhibitions, mainly from the Prado collection (it has more than 27,000 pieces, of which more than 7,800 are paintings), most of which is kept in warehouses.