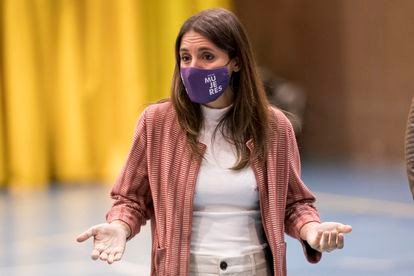 The Minister of Equality, Irene Montero, during a meeting with sportswomen from Alcorcón, on September 23. Pérez Meca / Europa Press

The Ministry of Equality is preparing a reform of the abortion law in which it wants to include the obligation to create a registry of health professionals who are conscientious objectors to guarantee that voluntary interruptions of pregnancy (IVE) are practiced in public health. Almost 86% of the IVE that are carried out are done in private clinics arranged with the public health. Equality brings out this Tuesday for public consultation the reform of the law on sexual and reproductive health and the voluntary interruption of pregnancy, better known as the abortion law. Planned changes include regulating the training of health professionals to ensure that they learn what is necessary about IVE and to combat the stigma that still exists around abortion.

The current abortion law, approved in 2010, includes conscientious objection as an individual right of health workers, but it must be done “without the access and quality of care of the provision being impaired”. He articulates it as an “always individual” decision that must be expressed “in advance and in writing”. The reality is that this information is not collected and that there are entire public hospitals and up to five autonomous communities – Extremadura, Madrid, Castilla-La Mancha, Murcia, Aragon and the cities of Ceuta and Melilla – where abortions are not performed in public health , which prevents guaranteeing the provision under equal conditions in all territories.

For this reason, the ministry is now considering promoting this registry, as the newspaper has advanced Public and the Ministry of Equality has confirmed to EL PAÍS. The reference that they will have to prepare these lists, they explain from Equality, is the one that includes the recent euthanasia law, a registry “that allows identifying needs in each health area, so that the right can be guaranteed in all cases.” The abortion law explicitly states that all women must have equal access to an abortion “regardless of where they reside.”

The registration proposal is still in a very early stage, it has not even been discussed with the Ministry of Health. Due to the public statements of its owner, it can become a point of dissent between the Government partners.

The Minister of Health, Carolina Darias, ruled out a few days ago that the Government is going to “regulate conscientious objection.” However, the minister added: “The access and quality of care of the provision of the interruption of pregnancy cannot be undermined by the right to conscientious objection.” In the case of euthanasia, the need to collect this information is set out in national law, but it is the autonomous communities, through the health ministries, that must create regional registries.

The Minister of Equality herself, Irene Montero, has pointed out in recent months conscientious objection as one of the key aspects to review in the reform of the abortion law, of which Equality expects to have a draft by the end of the year. The text in which the reform is open to public consultation until October 12 does not make any explicit reference to the objection of health professionals. The text does state that there is “a problem in relation to the guarantee of accessibility, gratuity and territorial equity in relation to the voluntary interruption of pregnancy” and that there are “obstacles that have hindered the effective and full exercise” of sexual and reproductive rights in Spain and that a reform is needed to guarantee the “effectiveness” of these rights.

Anyone interested in the reform can send their views to Equality. The ministry cites among its objectives to promote the training of health professionals from the faculties on the practice of IVE and the promotion of good practices that “from diversity and a feminist approach promote good treatment, respectful and egalitarian relationships.” It also wants to include instruments that guarantee “the autonomy of women and respectful childbirth” to avoid obstetric violence that women may suffer during childbirth. The World Health Organization has denounced that “throughout the world many women suffer disrespectful and offensive treatment during childbirth in health centers, which not only violates women’s rights to respectful care, but also threatens their rights to life, health, physical integrity and non-discrimination ”.

Equality has also focused on tackling “harassment situations” suffered by women who go to the clinics where IVE are carried out and the professionals who work in it by members of religious groups. The Ombudsman, according to Equality in the document that opens the consultation, recommended in 2020 that “the privacy of women, their physical and moral integrity and their right to free movement be guaranteed.” Last week, Congress approved promoting a change in the Penal Code to punish this harassment with jail terms.