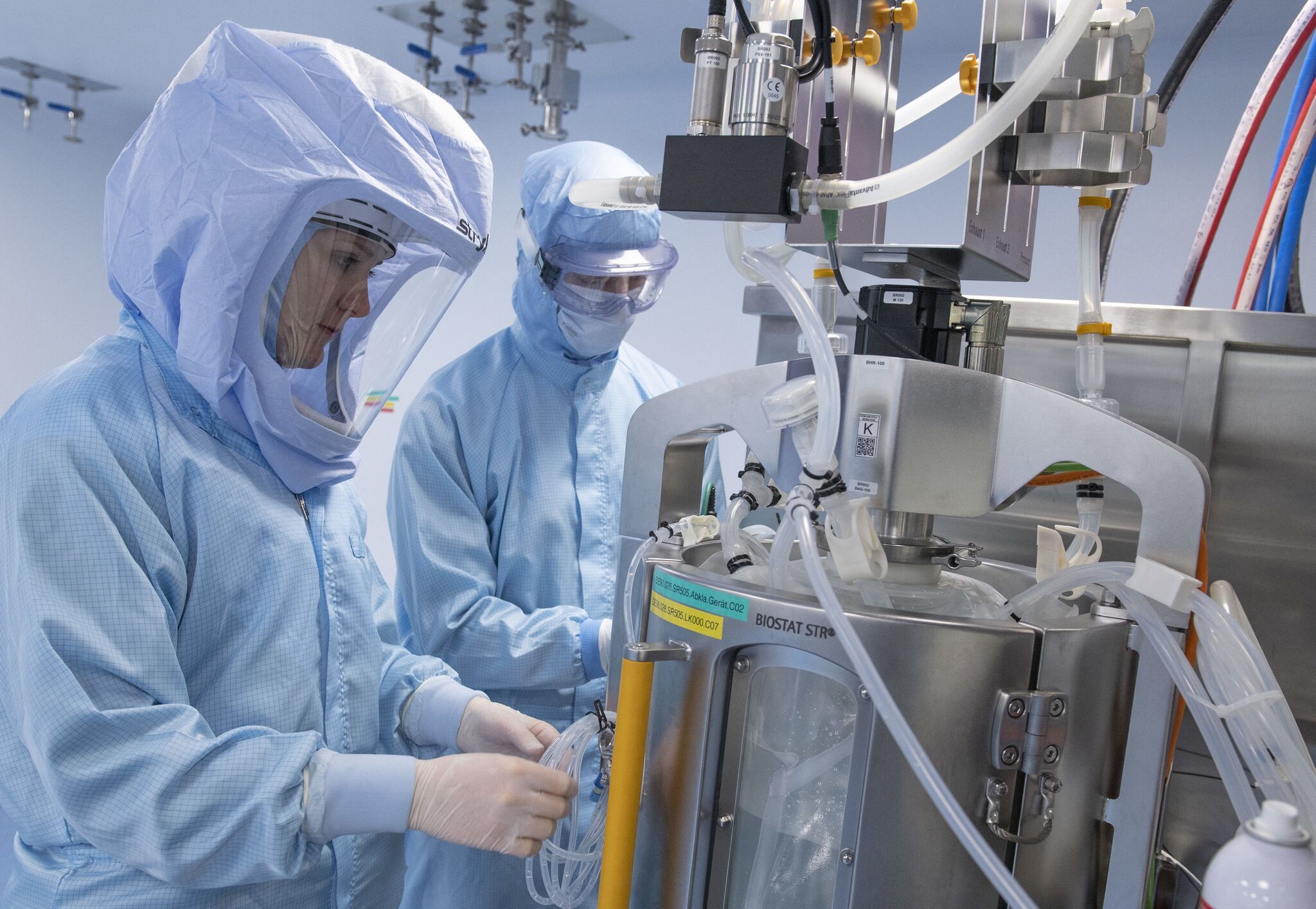 Only a year ago, only the specialists and the most attentive in biology courses knew what messenger RNA, or mRNA of its little name, was. Then the announcements related to Covid-19 disseminated scientific knowledge to the general public, even if some ignore it with great noise. Schematically, mRNA marks the intermediary between DNA, the support for genes, and any living protein. MRNA is produced in cells, from the genome, to make a host of proteins that are useful to the body. It can also, as with vaccines against Covid-19, be manufactured in the laboratory. In short, it is the stage between the script (the genes) and the film (the protein).

Researchers have been working there for over thirty years. As early as 1993, the French Frédéric Martinon and Pierre Meulien showed the feasibility of an mRNA vaccine against influenza in a mouse. When the coronavirus epidemic arrived, this conjunction of previous research, unblocked resources and experts allowed an acceleration as rarely in the history of medicine: the development of a vaccine in eighteen months.

The basic principle of a vaccine, whether mRNA or otherwise, is to present to the immune system one or more proteins of a virus, to tell it “this is what must be destroyed”. In the case of SARS-Cov2, scientists very quickly determined that the most recognizable thug was the spike protein, which clings to human cells.

Some have chosen to produce this protein in the laboratory and inject it to trigger the immune system, because, alone, the spicule does not cause Covid-19. Others, like Pfizer-BioNTech and Moderna, preferred to add an upstream step: injecting the genetic code of this spicule in mRNA format. It is then the organism of the vaccinated persons which will read this mRNA, decode it and produce the spicule. Which will be recognized by the immune system which thus learns to defend itself.

Clarification is required. The mRNA vaccines available against Covid-19 do not modify the genome. The injected mRNA does not integrate into the nucleus of cells, where DNA and genes are located. “No scientific data validates the passage of mRNA in the nucleus,” confirms Chantal Pichon, specialist in this technique at the CNRS molecular biophysics center in Orléans.

Ensure the conformity of the molecules produced

Going through mRNA instead of “just” injecting the protein has several advantages, the first of which is the 3D shape of the latter. “The conformation of proteins is as important as their composition,” recalls Professor Jean-Daniel Lelièvre, head of the infectious diseases department at Henri-Mondor hospital in Créteil and member of the vaccination commission at the Haute Autorité de santé. The proteins must have the same shape as on the virus to be correctly recognized. “

→ VERIFICATION. “The side effects of vaccines are more serious than the Covid”: true or false?

By injecting the protein directly, we risk a deformation, a bit as if a sofa in the script became an armchair during the shoot, preventing all the actors from sitting on it. The immune system then mobilizes against a distorted protein and may not recognize that of the infection. By asking him to produce the molecule himself, we are sure that it is compliant. The only problem, widely relayed, is the emergence of a variant: if the protein present on the virus mutates, then that produced by the cells will no longer resemble it and the vaccine will be less effective.

No risk of overdose

Another advantage is self-regulation. “From an mRNA, the cell will produce the same protein several times,” explains Chantal Pichon. This production will depend on the quality of the mRNA and the needs of the cell. After a few days at most, the mRNA is destroyed and disappears. “

→ CASE OF CONSCIOUSNESS. Covid-19: should we be wary of RNA vaccines?

No risk of overdose. Unlike other vaccines, mRNA products also do not need an adjuvant, such as aluminum salts. “You also don’t need to culture the virus in millions of eggs like the flu. This method allows financial and environmental savings while reducing the risk of allergies ”, recalls Steve Pascolo, specialist in immunology at the University Hospital of Zurich and one of the co-founders of CureVac, a German company which is currently improving its mRNA vaccine. against Covid-19.

If the scientific world roars about the “promises” of mRNA, it is above all that we can make cells manufacture any protein, as long as we know the genetic code of the desired protein. . Once the script is written, it is relatively easy to make the film. As summarized by Bertrand Séraphin, CNRS research director at the Institute of Genetics and Molecular and Cellular Biology, “mRNA can be used to manufacture antigens or, on the contrary, proteins that the body would lack”. In other words, “bad” elements to destroy or “good” elements absent.

“We can thus create vaccines such as against Covid, but also treatments for certain diseases,” describes Chantal Pichon. For example, replacing deficient hemoglobins in the context of sickle cell anemia (a blood disease) or stimulating bone regeneration in the event of a fracture. Another example, Moderna and AstraZeneca are jointly conducting a trial on a protein that promotes the development of new vessels around the heart. Injected into people who have had a heart attack, this mRNA therapy is believed to aid recovery.

But mRNA has its limits, especially for chronic diseases. Preparing therapies based on mRNA encoding insulin, for example, is of no interest. This being produced daily, it would require frequent injections. No improvement over current insulin pumps. “Therapies using mRNA make it possible for the moment to correct specific problems”, admits Bertrand Séraphin. No miracle to be expected against HIV, a virus elusive by the immune system.

In the coming years, the mRNA “revolution” should focus on anti-cancer vaccines and therapies. From BioNTech to Tidal Therapeutics, bought in April 2021 by Sanofi, many are working on it. “A tumor, that is to say deregulated cells, will produce abnormal proteins, which will act as an antigen,” recalls Bertrand Séraphin. The problem, and most of the work, is finding the right antigen, well exposed, easy to reproduce, and which can elicit a strong immune response. In addition, each cancer and each patient will express different antigens. So the right antigen will be needed for the right cancer. “

“For the moment, there is no universal tumor antigen, a piece that would be common to all tumors and against which the immune system could be directed,” says Steve Pascolo. But it is possible to make tailor-made therapies, looking at the proteins expressed by the tumor to create corresponding mRNAs. “These would then be vaccines preventing progression or relapse, in addition to or after conventional treatment.

“It takes about three months between the tumor biopsy and the vaccine tailored for the patient,” says Steve Pascolo. Several clinical trials are underway, but we will have to be patient. Because if it is easy and quick to see if you are sick with Covid-19 or not after a vaccination, in a context where the virus is circulating everywhere, drawing conclusions on the occurrence of cancer takes a long time. “We need months and years to see the impact on the tumor and the patient’s lifespan, to see if there is a recurrence or not, and to compare these vaccines to standard cancer treatments”, justifies the one who left CureVac in 2006. Ultimately, the question of the cost of such tailor-made therapies and vaccines will also arise.

Apart from therapeutic or preventive medical use, mRNA can also be used for aesthetic or sports purposes. “For example, we could perform injections of mRNA encoding elastin, a protein in the skin that contributes to its flexibility,” imagines Steve Pascolo. Or even mRNAs encoding myosin, a protein involved in the muscle process, to strengthen weakened muscle. MRNA doping soon?

The Crispr-Cas9 technique, known as “genetic scissors”, cuts a portion of DNA in the nucleus of cells. It is then a question of deleting defective genes, and possibly replacing them with healthy genes, like a kind of “cut and paste”. This technique is relatively easy to develop and inexpensive.

The available mRNA products do not integrate into the genome. They do not modify the DNA of people vaccinated against Covid-19, for example. But it is possible to use a synthetic mRNA to produce the Cas9 protein. This technique makes it possible to have a more efficient protein.

By combining the two, we can therefore inject mRNA synthesized to make cells produce a functional Cas9 protein. Which will then cut the DNA and edit the genome. For the moment only theoretical, such an idea raises many ethical questions.

“In vitro mRNA has been mastered for thirty years”

“The first step in making an mRNA vaccine is to build the DNA that encodes the protein you want. To do this, companies synthesize DNA on demand; it suffices to send the desired genetic sequence via the Internet. Then, this DNA is transformed into mRNA thanks to an enzyme, in vitro. To this mRNA strand, various elements necessary for its correct reading are added. This in vitro mRNA production has been under control for about thirty years. It then remains to bring them into the body. For this, we use liposomes, kinds of “micro-droplets of fat”, which transport the mRNA to the right place and ensure that it is not destroyed too quickly. The expertise of BioNTech and Moderna derives a great deal from these liposomes, which have been specifically developed. Once in the body, mRNA is decoded and the protein produced by cells. “