“In the heart of Lille, show a Church in celebration” 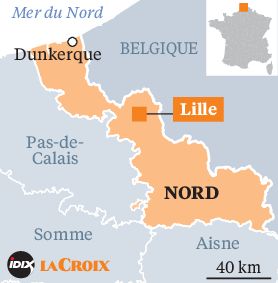 From our regional correspondent

“Treille en fête, it started with a return from a pilgrimage to Lourdes, in 2015, when I was vice-president of the Hospitalité de Lille. In June, each year we take 800 young people in second, some of whom are far from the faith but love Lourdes; there, we manage to reach them through service, sharing, support… They experience something strong and afterwards they return to high school but lose this group dynamic.

With Bruno Ackou, another hospital worker, we started from there to continue to bring together young people while helping the Hospitalité de Lille, which is the biggest diocesan hospitality. With the youth ministry, we brought them together around Glorious at the start of the 2016 school year and we donated the profits from the concert to the seven trains of the diocese, so that each team can help pilgrims pay for their trip.

The following year, on the strength of this first success, we transformed the event into a real festival (1), with different times of meetings around music for young people, as well as families, during a weekend. What counts for us is to bring a young dynamic within the diocese, to be and to show a Church in celebration, a living Church which evangelizes through song, praise, prayer … passes through the heart of the diocese, in the Notre-Dame-de-la-Treille cathedral which is also at the heart of the city of Lille.

Personally, it was in Lourdes that I felt a first call from God nineteen years ago, it is there that I understood where my mission was. There have been other calls since, especially the diaconate. At Treille en fête, what a richness to see these young people and children singing, dancing with Christ in their midst, who makes them shine! Christ is food, he nourishes us with his word, his actions, his teaching… and it is up to us, too, to nourish others: “Give them yourselves to eat.”

Part of the profits of Treille en fête is now dedicated to initiatives led by young people, for example the provision of a rehearsal room at the House of the Lay Apostolate for music groups. It is important that young Christians can express themselves, especially through music. I keep in mind a very beautiful pre-concert prayer time in the chapter room at the cathedral. The Holy Spirit was there, among the security, technical, musicians and volunteers of the festival.

We had to postpone the festival to 2020, but ultimately, it allowed us to settle down and rework the basics of the project, we experienced it as a year of transition. We are increasingly trying to favor groups from the region because there is a lot of musical talent in Lille and for the first time, the 2021 edition will be 100% northern. For this new edition, we have also planned buses to facilitate the arrival of young people in Lille. Unfortunately, it remains very complicated to bring sick pilgrims to La Treille … but I would like us to put in the means to allow them to reach us as much as possible, or at least that we imagine a digital way of reaching them at home, in nursing homes or at home: bringing together our 3,500 pilgrims for a weekend! “