German elections: Greta Thunberg in Berlin to put ecology at the heart of the debate 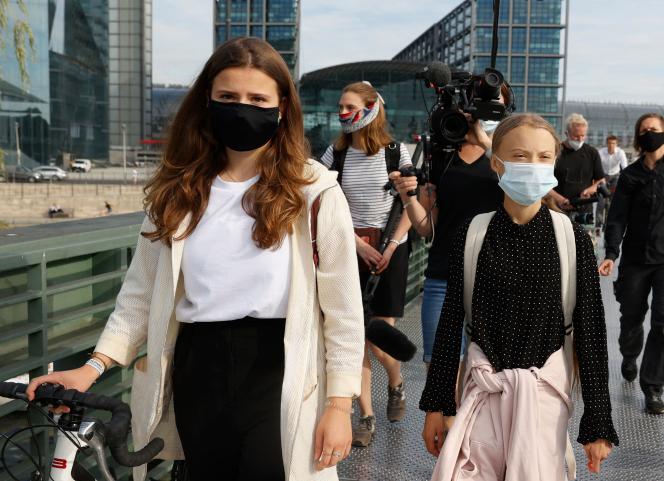 The activist of the movement “Fridays for Future” Luisa Neubauer alongside the Swedish activist Greta Thunberg on a bridge in Berlin, August 20, 2020. ODD ANDERSEN / AFP

Two days before the German legislative elections, thousands of climate activists, led by Greta Thunberg, plan to put pressure on the candidates by demonstrating Friday, September 24 across the country to demand decisive measures against global warming. During the electoral campaign, “the political parties did not sufficiently take the measure of the climate catastrophe”, criticized Luisa Neubauer, head of the “Fridays for future” movement in Germany, in an interview with Agence France-Presse ( AFP).

“The big change will only be possible if we put pressure on the streets (…) if we challenge the political parties by saying ‘now there are no more excuses'”, she added, assuring that these elections were “extremely important” because they “will set the course” for the next decades. “Fridays for future”, launched in 2018 and become the forum for the young “climate generation”, is organizing its 8th “strike” on Friday in more than 70 countries, with 470 mobilizations planned in Germany.

The Greens lagging behind in the polls

Figure of the movement, the Swedish activist Greta Thunberg must speak at the beginning of the afternoon in front of the Reichstag, where the German deputies sit. In the home stretch before the legislative elections, polls predict a close match between the Social Democrats in the lead with 25% of voting intentions and the conservative camp (CDU / CSU) up to 23% according to a latest Civey poll on Thursday.

Article reserved for our subscribers Read also German elections, D – 3: for Armin Laschet, everything is possible

The Greens, at the end of a campaign deemed disappointing, would obtain 15% of the voting intentions by taking third place, ahead of the liberal party (12%). As environmental activists take to the streets, the three main candidates for chancellery will begin their final campaign meetings 48 hours before a decisive ballot, the results of which will be scrutinized across Europe.

The struggling Conservative candidate Armin Laschet is expected in Munich alongside Chancellor Angela Merkel on his way out of politics after 16 years in power in Europe’s largest economy. For his part, the Social Democrat Olaf Scholz, Minister of Finance and Vice-Chancellor of the outgoing government, is due to speak Friday in Cologne. The Green Annalena Baerbock will be in Düsseldorf.

In their electoral programs, the three candidates have made environmental protection one of their top priorities for the next four years, committing in particular to limiting global warming to 1.5 ° C. Climate change is a major challenge for Germany, the world’s fourth largest economy with powerful but polluting industries. During the election campaign in mid-July, the country was hit by deadly floods, which killed more than 180 people in the west of the country and are directly linked to climate change, according to experts.

Greta Thunberg nevertheless relativized the impact of the German elections in the fight against global warming. “The climate crisis cannot be solved by political parties alone,” she assured before her trip to Berlin. “We cannot only vote for change, we must also be active democratic citizens and take to the streets to demand action,” she added.

In a new report, the UN has concluded that limiting global warming to 1.5 ° C is impossible without an immediate and massive reduction in greenhouse gas emissions. The 2015 Paris Agreement on climate change called for limiting global warming to less than 2 ° C above pre-industrial level, and ideally 1.5 ° C. But on the basis of the current commitments of the member states of the agreement, “the world is on the catastrophic path of 2.7 ° C”, recently warned UN Secretary General Antonio Guterres.

Article reserved for our subscribers Read also Far from the elections, the youth in search of new forms of engagement