Federal elections 2021: how has Germany received refugees arriving since 2015?

Jamil Alyou does not yet realize the scope of this email received a few days ago. He sees himself again, a 21-year-old Syrian arriving in Germany one morning in August 2015, convinced that he would never understand a word of this unknown language. He thinks back to the young man with the uncertain future he was then. “Today, I can present myself as a German Syrian”, he welcomes, all smiles. This famous email announced his naturalization to him. 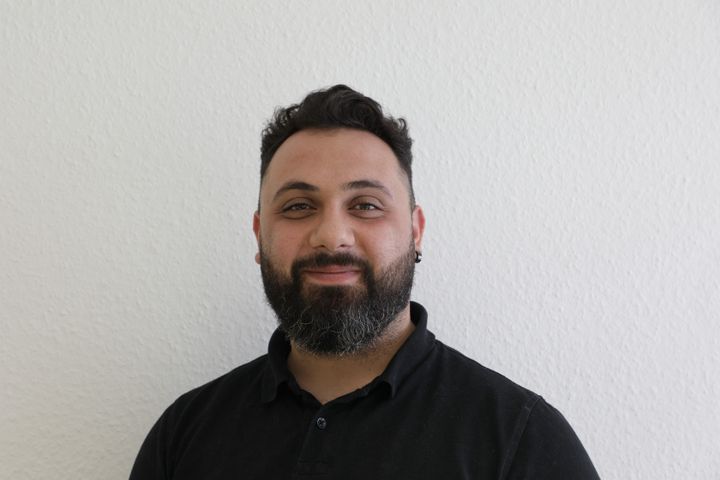 Six years ago, just over a million exiles crossed the border into the world’s fourth largest economy in hopes of a safe haven and a better life. “Welcome to Germany”, heard the Syrian from a policeman, while Angela Merkel proclaimed with conviction “Wir schaffen das” (“We can do it”), confident of the merits of her policy of Home. Between 2015 and 2020, 1.9 million exiles, mainly from Syria, Afghanistan and Iraq, applied for asylum across the Rhine, according to data fromEurostat (link in English).

Six years after this flagship measure of the Chancellor, who will not stand for re-election on September 26 in a new federal election, the time has come to take stock. Has Angela Merkel succeeded in integrating refugees?

Jamil Alyou tells his story at the Multikulturelles Forum in Dortmund (West Germany), an organization offering advice and language courses to refugees. The young man knows them well, working himself for the association of aid to exiles “Train of Hope” (“The train of hope”). Here, vaccination advice is written in German, English and Arabic. Four Syrians take their places for the German lesson of the day, slipping a few words of Arabic to the teacher, also Syrian. On the workshop program: prepositions. One of the students speaks more fluently than her peers. But not yet fluent.

In 2019, half of the refugees who arrived between 2013 and 2016 rated their level of German as “good” or “very good”, according to a study conducted by theFederal Office for Migration and Refugees (link in English). Less than 15% considered their level “rather low”. In this generation of displaced people, less educated and older people, women, in particular mothers, often have a more intermediate level, encountering more obstacles in learning the language of Goethe, the first obstacle on the way to education. ‘use.

“I was a teacher in Syria. I have not yet found a job here, it is above all the problem of the language that must be mastered.” 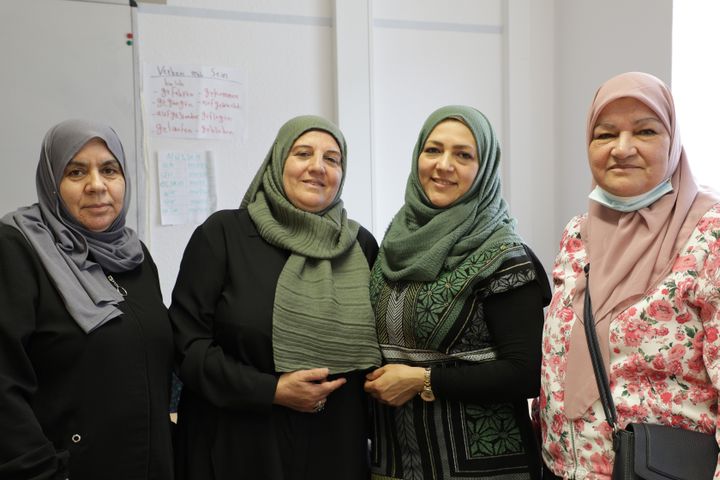 In a country with an aging population, the government, chambers of commerce, professional federations and training centers have mobilized for their economic integration. A fundamental part of “Willkommenskultur” (the “culture of hospitality”, in French). Six years after “Wir schaffen das”, half of the refugees who arrived in recent years have access to employment within five years of their arrival, according to the federal employment agency (in English).

The gap between men and women is however very clear: in 2018, 14% of them had a job, against 52% of male refugees, according to a report (PDF) from the German Institute for Economic Research (DIW). Today, those rates stand at just over 20% and 60%, according to Jannes Jacobsen, a researcher at the Free University of Berlin and co-author of a DIW report on the integration of refugees.

“On average, refugee women are less educated than men, but access to the labor market is strongly correlated with the level of education,” he explains, adding that women, more often than men, have the care of the children. Another obstacle: the difficulty in having one’s qualifications recognized. Nevertheless, the integration into the labor market of these populations “happens faster than for previous generations”, underlines Jannes Jacobsen.

Talaat Hassan, who arrived in 2016, is happy to have signed a contract five months ago. After three years of language courses and applications against the background of a pandemic, this Syrian holder of a master’s degree in management finally landed a CDD as a material handler at Amazon. The thirty-something walks the aisles of a warehouse every day, carefully depositing products in their packaging. “I came to the conclusion that it was necessary to go to the lowest level and then rise in rank. I am used to new beginnings”, philosopher the one who lived 27 months in refugee camps, from Sweden to Sweden. ‘Germany.

The housing estate where Talaat Hassan now resides, in a peaceful district of Oberhausen, contrasts with the dormitories he has known for a long time. The refugee lives in a large studio, under the same roof as a German family, whose children he sometimes babysits and never misses a birthday. “He’s part of the family,” smiles the mother, Sejla Badnjevic. 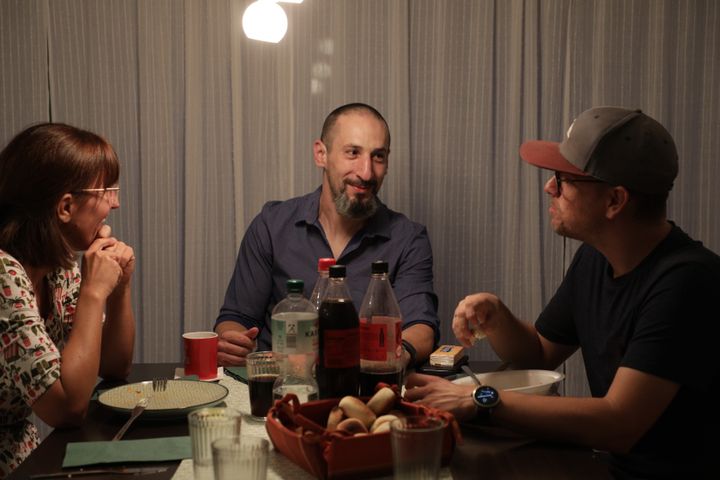 “A minority of refugees live like me with a German family. Most are isolated”, regrets Talaat Hassan, denouncing the lack of will of some, for work and exchanges with Germans. “We also stay between us because we have our problems, our questions,” he tempers.

According to the DIW study, 57% of refugees see locals regularly, but less than half (43%) have German friends whom they see frequently. “Many refugees feel lonely,” comments Jannes Jacobsen. The academic recalls that “emigrants and natives often take time before interacting”. Six years are not always enough, especially in a context of pandemic and economic crisis, where the reception of refugees is no longer the priority.

The Germans’ report to immigration also plays a role: in 2018, another 74% of them remained concerned about this issue, according to the DIW. These concerns, which have been declining since 2016, have had a limited impact on the displaced populations: more than half of them have not felt any form of discrimination since their arrival, they say in the same study. 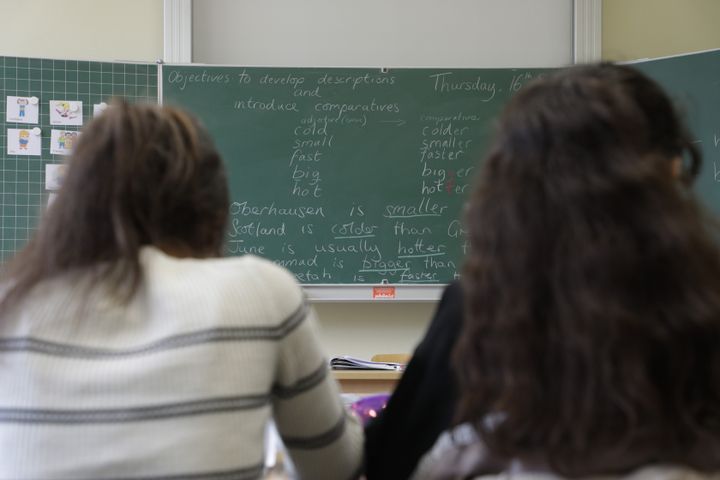 In the new town of Talaat Hassan, at the Bertha von Suttner gymnasium (secondary school), a handful of students from Iraq, Afghanistan or Serbia learn new adjectives in English. It is a tradition here: for more than twenty years, we have taken care to welcome exiled students. “School without racism, school with courage,” reads a fresco on the stairs.

What if the key to integration lay within these walls? According to the DIW, more than 80% of refugee students express a strong sense of belonging to their school – more than their German peers. “In terms of education, integration is a success”, slices the principal, Sascha Reuen.

“The obligation to go to school for all refugee minors was a good decision.”

Schools like his have offered specific classes to refugees, before their integration into the general curriculum. Others preferred a more rapid reception of young exiles in the classes. Esmaeel, who came from Afghanistan at the age of 10, in 2015, joined his German comrades only three weeks after his arrival. “A lot of students helped me and I had an electronic pen that said words to me in German,” describes the teenager. Even though his grades fell upon entering college, he now feels “on par with his classmates.”

Of all the young exiles who arrived at the gymnasium between 2015 and 2016, a third was able to integrate the general course, according to Sascha Reuen. The majority turned to technical and vocational education. A choice for some, while others have been blocked by their lack of German.

In Dortmund, Jamil Alyou’s association particularly helps young people, some of whom follow these more technical courses. The Syrian knows he owes a lot to “Train of Hope”. What challenges does he still have in front of him, now that he is a German citizen, employee and student of social sciences? “The biggest difficulty is always being seen as a Syrian refugee,” he replies. “People often ask me where I am really from, even though I have found my place in Germany.”