Even with their backs to the wall, OL continue their comeback thanks to their “good game” 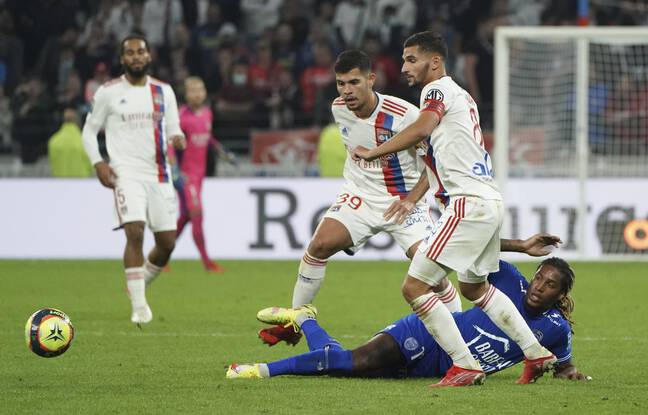 71% possession of the ball, a dozen clear chances wasted (hello Houssem Aouar) against an inspired Gauthier Gallon, but also Stéphanie Frappart very lenient with Karim Azamoum (15th) and Jimmy Giraudon (28th), who would have deserved the ‘expulsion… On Wednesday, the first period of this OL-ESTAC (0-1) clearly felt the loss on the Lyon side, after the opening of the scoring of Xavier Chavalerin (trained at OL, while to do) in the 45th minute. There was something to think about, three days after the cruel outcome of the Turpingate at the Parc des Princes (2-1). Except that this Lyon version of Peter Bosz is not scuttled for free, unlike, for example, his elimination under high tension in the Coupe de France, last season against Monaco (0-2), revolted at the time by strange decisions ( there too) by Stéphanie Frappart.

“Before tonight’s game, we told ourselves that if we were ever led, we shouldn’t stop playing,” said Brazilian midfielder Lucas Paqueta. That’s what we applied and it allowed us to reverse the trend. “Carried by decisive recruits, with the first goals Wednesday of Xherdan Shaqiri (1-1, 48th) and Emerson (2-1, 72nd), the OL then completely suffocated the Trojans to fly to a crucial success after the stoppage against PSG. “The defeat in Paris had a bitter taste because we had produced a good game, recalls Lucas Paqueta. Winning tonight gives us more confidence. “

Emerson is decisive with his “bad foot”

How could it be otherwise, given this 6th place three points behind OM (2nd), after four victories in the last five official matches, in all competitions. “There are a lot of qualities in the team, believes the side recently European champion Emerson, author of a second crucial goal on his” bad foot “. Maybe he lacked a little confidence but the results are coming. “

Unsurprisingly, Peter Bosz focused more on his method than on the raw results targeted: “In the games at the start of the season, we only created five or six big chances. Tonight, we already had as many just in the first quarter of an hour. We just missed scoring in this first half. “

“We play better and better, we all see it”

Upon returning from the locker room, Xherdan Shaqiri treated this lack of efficiency after a bright opening from Bruno Guimaraes. “Peter asked us to play faster in order to disrupt the defense of Troyes, and that’s what happened in the second half,” said Lucas Paqueta. Even at 0-1 on Wednesday, the unwavering support from the turns heralded a form of osmosis unusual in Lyon between the team and the supporters.

One of the great successes of the start of the season for @OL Peter Bosz version, it is this team-turn osmosis not seen in Lyon for a very, very long time. #OLESTAC pic.twitter.com/SqjLLvbg9X

“We’re playing better and better, we all see it,” concludes Peter Bosz. And especially the supporters of the turns, determined to accompany their team’s virtual lap of honor until the end of the evening. Rarely in OL’s history has a Ligue 1 match-up against Troyes seemed so funky. The Bosz effect can be seen here too.