Eric Zemmour, a quasi-candidate already campaigning on his “obsessions” 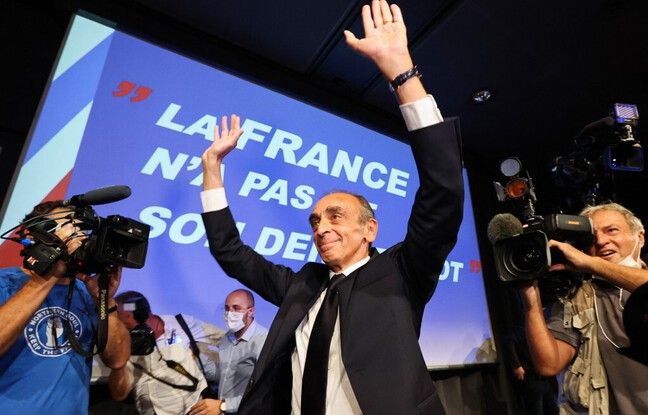 Eric Zemmour knows it very well: we only get out of ambiguity at our expense. By maintaining the uncertainty around his candidacy for the 2022 presidential election, the polemicist has everything to gain. “I can make this last as long as it’s my interest […]. It is I who choose the moment ”, he hammered last week on
RTL. While waiting to get out of the woods, the former editorialist of Figaro multiplies the media outings for the promotional campaign of his book France has not said its last word. He will also face Jean-Luc Mélenchon this Thursday evening during a debate on BFMTV. And even if he assures that he has not yet made his decision, Eric Zemmour is already working on his other campaign.

His relatives are already preparing his candidacy

The writer began last week, in Toulon and Nice, his tour of the country to go “to meet the French”. It will also be at the Palais des Congrès in Paris on Monday, October 4. With, each time, false airs of presidential meetings. “This tour of promotion of the book, which is a hit, is a classic for him, assures one in his entourage. Already, in 2015, some spoke of the presidential campaign… The difference, this time, is that he assumes to think about it so, around him, more people think about it, and that professionalizes the whole. “

Because if the person concerned pretends not to have decided yet, behind the scenes, small hands are agitated. Collage of posters, promotion on social networks, launch of a website, animation of a youth movement, fundraising and even research of the famous 500 sponsorships to be able to compete for the supreme election. The Les Amis d’Eric Zemmour association already claims more than a hundred promises from elected officials. “We want him to be a candidate, and every week we receive many messages to this effect, and donations, to help him be a candidate,” assures the spokesperson for the association, Antoine Diers. “Eric Zemmour creates a lot of hope, especially on the right, because he is the only one to stand up against political correctness. “

This is one of the credo of the person concerned. “I’m here to shock, I don’t mind shocking […]. There is such propaganda that you need a strong voice to make the voice of France heard, ”he said on CNews. For the moment sweeping away any idea of ​​a program, Eric Zemmour imagines himself invested with a mission: to save France. Around
« d’obsessions » claimed: the decline of Western civilization, Islam and immigration.

“In 1995, Jacques Chirac won on the social divide. In 2007, Nicolas Sarkozy on national identity. There are times that you have to know how to marry, understand the concerns of the people, seize them and respond to them, in order to put the State back in operation at the disposal of the French ”, smiles his friend and former sovereignist MEP Paul-Marie Coûteaux . Eric Zemmour therefore multiplies the shattering outings on these identity themes, even if it means twisting reality, as when he defends the thesis of the “great replacement” and ensures that in “2050, we will be a half Islamic country”. Yet the institute’s figures
Pew Research Center estimate that Muslims will rather represent 12 to 18% of the French population on that date.

Whatever, because for Eric Zemmour, the interest is elsewhere. Multiply controversy, on foreign first names or the number of blacks in the French football team, in order to dictate the pace of the campaign. “If I go, it is not a dog in a bowling game that I want to be, it is to impose my themes”, warned on France 2 the native of Montreuil, condemned several times by the courts.

“If we have a candidate who is too lukewarm, Zemmour will kill us”

The strategy seems – for the moment – to bear fruit. Eric Zemmour climbs in the polls, grabbing Marine Le Pen and, above all, the candidate of the right. It even reaches 11% in a Harris Interactive survey published on Tuesday. by Challenges. At the National Rally and at Les Républicains, we no longer deprive ourselves to let go of the blows. Sign that we are worried about the dynamics of the quasi-candidate. “We pay a lot of attention to it because we fear a regular siphoning. If we have a candidate who is too centrist, too lukewarm, Zemmour will kill us, ”recognizes an LR executive.

In government, too, the hypothesis does not leave indifferent. “He’s a hard fake […], and under the false toughs hide the true submissives ”, struck an unusual tone Jean-Baptiste Djebarri, the Minister for Transport, on France Info. “He is an excellent orator, good with rhetoric but, faced with the contradiction, he is very uncomfortable and does not accept his words, especially on women”, underlines a ministerial adviser, who relativizes his dynamics : “It benefits from a” seen on TV “effect, but its themes are anxiety-provoking. “

After the decision of the CSA to count his speaking time, the former political journalist no longer has a forum on CNews, nor on Paris Première, who have decided to part with their favorite columnist. An unforeseen event in the launch of the Zemmour rocket? “The game is now being played around the release of his book, wants to believe Paul-Marie Coûteaux. If he beats the French Suicide score [
plus de 500.000 exemplaires écoulés], that will mean that there is a call from the country. And we’ll see if politicians join him. Everything will be played out in the coming month. »According to information from the specialized site
News, the book would have already exceeded 80,000 copies in just one week.