Vaccination of 5-11 year olds against Covid-19: five questions raised by the Pfizer-BioNTech study 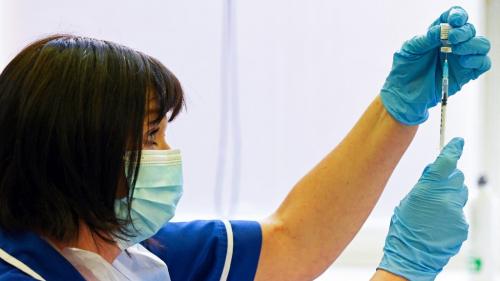 A first step towards vaccination of children? The American-German laboratory Pfizer-BioNTech announced, Monday, September 20, promising results in young children for its vaccine against Covid-19, hoping to soon obtain the green light from the health regulatory authorities. Franceinfo details the study and takes stock of the knowledge on this subject.

1What do clinical trials conducted by Pfizer-BioNTech say?

While the vaccination of adolescents is gaining ground all over the world, the Pfizer-BioNTech laboratory is going further by offering to vaccinate children from the age of 5 years. “In participants aged 5 to 11, the vaccine is safe, well tolerated and exhibits robust neutralizing antibody responses,” said US giant Pfizer and its German partner in a joint press release (in English), published Monday, reporting the results of their clinical work. These have not been peer reviewed or published in a scientific journal.

These partial results, details of which have not been made public, are based on a study of 4,500 children aged between 6 months and 11 years in the United States, Finland, Poland and Spain. The two companies expect to publish results “as early as the fourth quarter” for the 2-5 age group as well as that of 6 months-2 years, who have received two injections of three micrograms, and plan to submit this data. to the authorities “as soon as possible”.

This announcement was quickly greeted by Dr. Ashish Jha, one of the leading Covid specialists in the United States, who described it as “good news” expected by many parents. If all goes well and the approval follows, “my 9-year-old will be vaccinated by Halloween,” he tweeted.

Good news many parents (including me!!) have been waiting for

If the full data bears this out

As I’ve been saying for a while

My 9-year will get a shot by Halloween

Pfizer and BioNTech plan to share this data with the US Food and Drug Administration (FDA), European Medicines Agency (EMA) and other regulators as soon as possible.

2 Were there any side effects?

The vaccine against Covid-19 “was well tolerated, with side effects, generally comparable to those observed in participants aged 16 to 25 years”, assure the laboratories in their press release. The most frequently reported side effects are pain and an inflammatory reaction in the area of ​​the bite, as well as headache, onset of chills or fever.

The data, summarized at the end of the second phase of the study, also testify to “a strong immune response in this cohort of children, one month after the second dose”, specifies Pfizer-BioNTech. The laboratory claims that the immune response is “comparable” to that observed in the control group used for this analysis, made up of people aged 16 to 25 who received a higher dose vaccine.

Faced with these conclusions, the infectious disease specialist Odile Launay, however, urges caution. “We did not read these results and they included in these trials 2,000 children [sur la tranche d’âge 5-11 ans], which is low to be sure that we will not have undesirable effects “potentially serious such as myocarditis, she explains to franceinfo. And expanding the cohort could prove to be complex. Asked by 20 Minutes, Mathieu Molimard, head of the medical pharmacology service in Bordeaux, recalls that children are “a very difficult population to bring together”, and which requires parental authorization.

3Are there other immunization data for under 12s?

No. These are the first clinical data for this age group of 5-11 years. “The first studies carried out by scientists can only take place if the vaccine is authorized by health agencies. It is only in this case that it will be possible to follow vaccinated people over the long term”, explains at franceinfo the immunologist Frédéric Altare.

So far, the European Medicines Agency (EMA) and the US Food and Drug Administration (FDA) have cleared vaccines from Pfizer / BioNTech and Moderna, based on messenger RNA technology, but only from 12 years. Still the FDA said in early September that she would “carefully” examine emergency clearance requests for vaccines intended for children under 12, a process that is expected to take “weeks rather than months.” At the same time, a study on children under 12 for the Moderna vaccine is underway.

4Have people under 12 already been vaccinated against Covid-19?

In Israel, children aged 5 to 11 at risk of serious complications from Covid-19 have been vaccinated since August 1. This is a “special authorization” without waiting for clinical data, and each injection is “studied on a case-by-case basis,” reports the country’s health ministry. The authorization particularly concerns children who present “significant risks of serious illness or death following infection with the new coronavirus”, specified a document from the Ministry of Health.

This is also the case in France, on a more informal basis. In March, the French Pediatric Society (SFP) had estimated that a “very small number of children at very high risk of severe Covid-19” could be vaccinated like adults, even though there is no marketing authorization for this age group . This concerns young patients suffering from very specific autoimmune pathologies or from “genetic predisposition to viral encephalopathies” making them particularly vulnerable. According to the VaccinTracker website, which is based on data communicated by the Ministry of Health, a little more than 11,000 children in this case had thus received two doses on September 15, or a tiny portion (0.12%) of the overall population .

However, Pfizer and Moderna vaccines are already being given to adolescents over 12 years old in several countries, including the UK, England, Scotland and Wales – ahead of Northern Ireland next month – as well. than adults around the world.

5What would the vaccination of this age group change?

According to the World Health Organization (WHO), the benefits of immunizing children under 12 have not yet been proven. It must be said that children of this age have very few severe forms of the disease. But the immunologist Frédéric Altare, research director at Inserm, recalls what we could expect for the entire population.

“The principle is that the more people vaccinated, including children, the more the population will be protected against the spread of the virus.”

Although the vaccine does not prevent 100% from transmitting the virus, an action on its circulation could prevent a new saturation of hospitals and deaths among older but unprotected populations. In addition, even if children are considered to be less exposed to the risk of developing a severe form of Covid-19, some scientists fear that with the spread of the Delta variant, which is more contagious, serious cases could appear in the youngest.

“We can see that more young people develop serious forms of the virus because of the variant,” says Frédéric Altare. Due in particular to the spread of Delta, “since July, pediatric cases of Covid-19 have increased by 240% in the United States, highlighting the need for vaccination” of the youngest, argued Albert Bourla, moreover, CEO of Pfizer, seeing the data as a “solid basis for clearance applications.”

Questioned by franceinfo, Odile Launay temporizes. “Before starting a vaccination in children who do not have a serious or very limited form, we must have more data on a larger number of children,” said the infectious disease specialist. “If we have enough elements and we can vaccinate without putting children at risk, it can be a benefit and allow schools and classes to be left open.”