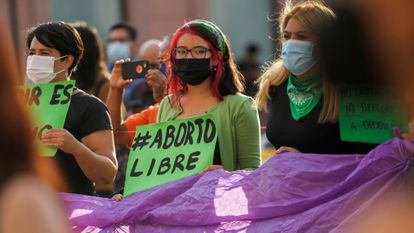 The Supreme Court of Justice of the Nation (SCJN) confirmed this Tuesday the invalidity of the conscientious objection of health personnel to abortion, which was contemplated by the General Health Law of Mexico. The high court urges Congress to review the current norm by not setting clear limits for the exercise of that power “without putting the human rights of other people at risk.” The current precept also addresses the issue without a gender perspective, when women are the only ones affected. The final resolution has been agreed two weeks after the Court adopted the historic decision to decriminalize abortion and one day after the majority of the ministers invalidated the figure of conscientious objection. Its regulation is now back in the hands of the legislative power.

The philosophy of the presentation, presented by Judge Luis María Aguilar Morales, is that the right to conscientious objection cannot prevail over the rights of third parties, especially the right to health. The Plenary, however, has not publicly debated the particular votes and objections to the draft judgment. The magistrates have agreed to forward their comments to the speaker for incorporation in the final version of the ruling. The court, the highest constitutional arbitrator in Mexico, has decided to send some guidelines to the Chambers of Deputies and Senators to legislate in this regard. “The Plenary Assembly decided to establish such minimum guidelines in the respective sentence, urging the Congress of the Union to take them into account when reforming the General Law analyzed,” it has resolved.

The section of the General Health Law that the Supreme Court requests to change is the 10 Bis, added in May 2018, which establishes that “the medical and nursing personnel that are part of the National Health System may exercise conscientious objection and excuse themselves from participating in the provision of services established by this law.” The addendum also clarifies that “when the life of the patient is put at risk or it is a medical emergency, conscientious objection may not be invoked, otherwise the cause of professional liability will be incurred.”

The observations contained in the sentence, which is based on an action of unconstitutionality presented by the National Human Rights Commission, do not have so much to do with the wording of the current norm, but with all the loose fringes. That is, the legislators did not analyze all the assumptions. For example, “the Congress of the Union failed to establish minimum standards that guarantee the right to availability of medical services for all people.” That is, public institutions can count on non-objectionable medical personnel at all times. Or that the State is in a position to guarantee medical services in the event that there are no objector health personnel.

The legal discussion was urgent, especially after annulling the jail sentence with which justice punished abortion in some states. But the ruling has more to do with the omissions than with the challenge of a faculty. That is to say, the current law is poorly formulated or, in the best of cases, it was left half. In any case, the effects of the Supreme Court’s decision will not be immediate, because the new law must follow parliamentary channels and the Chambers will have to set a calendar for the review of the challenged article. “The resolution”, says the court, “will take effect when its operative points are notified to the Congress of the Union, in addition to that the sentence will also be made known to the Federal Ministry of Health, as well as to the Congresses of the federative entities, for the aspects that are within its competence ”.

The ethical scope of the debate was echoed this morning at the president’s press conference. Andrés Manuel López Obrador has avoided this Tuesday to pronounce on the matter, an unusual behavior in him, and has recognized that it is “a matter that produces a lot of controversy, a lot of controversy.” “It is an issue that confronts, and for some time I have tried not to express my opinion, I respect the decisions made by the legal authorities and I do not have an opinion because I have to be respectful of everyone, everyone, believers and non-believers, that is my main role. on these issues and I can not comment. I am not washing my hands, I am not Pontius Pilatos, I simply believe that all Mexicans should not take sides on an issue of this nature, ”he stated.