Investment in physical capital by the public sector stood at 2.26 percentage points of Gross Domestic Product (GDP) during the second quarter of 2021, its lowest level for a second quarter since 1999, according to calculations based on figures reported yesterday by the National Institute of Geography and Statistics (Inegi).

During the second quarter of 2021, spending on physical capital in the Mexican economy as a whole fell from 19.4 to 18.8 points of GDP, after private investment also fell, in this case from 05.17 to 16.52 points of the product, show the data of the Global Supply and Demand of Goods and Services published by Inegi.

The reactivation of investment has been hesitant in the last year, because after hitting a historical low of 17.8% of GDP during the second quarter of 2020, it has had two quarters of progress and two quarters of falls, which is still far from the level of 22.6% of GDP in the third quarter of 2018, the last peak of the indicator.

In the case of public physical investment, the share of 2.26% of GDP – equivalent to 585 thousand 911 million current pesos – is the lowest record since the second quarter of 1999, when it stood at 1.84% of the product.

This indicator is also far from the 5.18% of GDP mark in the second half of 2010, a year after the crisis that triggered the bursting of the mortgage bubble in the United States.

In June 2019, seven months after the inauguration of President Andrés Manuel López Obrador, his government and the private initiative represented by the Business Coordinating Council (CCE) signed the Agreement to promote Investment and Inclusive Development, in which a physical investment of 25% of GDP was set as a goal, of which 20 points would be from the private sector and five from the public sector.

However, both public and private investment have fallen in a more or less sustained manner throughout the six-year period, even apart from the negative impact of the COVID-19 pandemic.

In the case of the private sector, the lower investment dynamism coincides with public policy decisions of the current government such as the cancellation of the work at the Texcoco airport, the suspension of auctions of oil blocks and electricity purchases, as well as the refusal of the government to carry out private investments, such as a new brewery plant in the state of Baja California.

While, public investment has contracted amid a prioritization of social spending (universal pension for the elderly, scholarships for young apprentices, subsidies for planting trees, etc.), which exceeds the budget for the government’s flagship works such as the Mayan Train, the Felipe Ángeles International Airport and the Dos Bocas refinery. 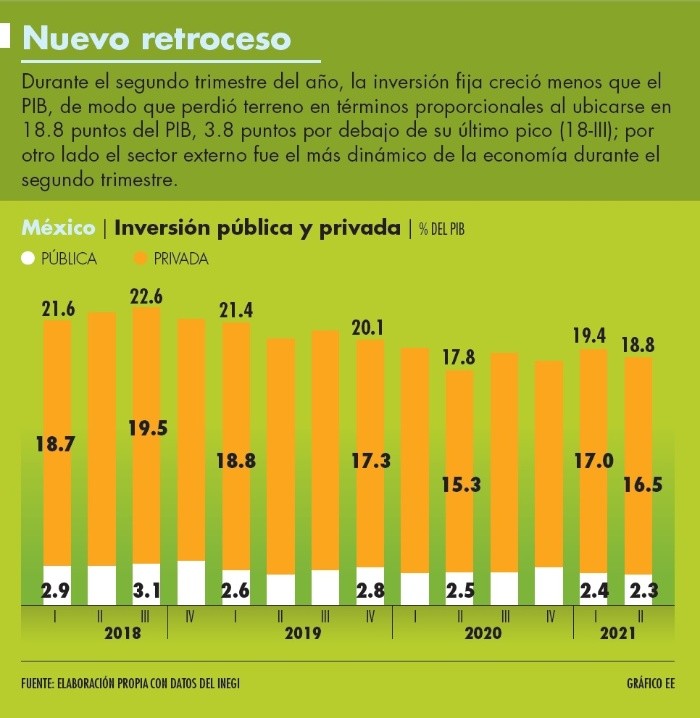 In the 2022 Federation Expenditure Budget Project, the government raises a 17.7% increase in public investment spending compared to what was approved for 2021, to 863,200 million pesos, which would imply that it reaches a share of 3.1% of GDP, which would be 0.1 points more than what was projected for this year.

The Center for Economic Studies of the Private Sector applauded the initiative, but stressed that reaching this level “will depend on the availability of resources and the government’s capacity to effectively carry out the budgeted projects.”

And he recalled that this 2021 a physical investment expenditure was approved 8% higher than that approved for 2020, but official figures indicate that in the first seven months of the year physical investment has fallen 4.7%, including resources for projects. government insignia.

You want to know more?

If you were interested in this news and want to know more, then download and discover INFORMAPlus, EL INFORMADOR’s digital application, where we have exclusive content, selected by our editors, to give readers a more complete experience.