Emmanuel Macron announces a law “of reparation with regard to harkis”

Believing that France had “failed in its duties” towards these auxiliaries of the French army during the Algerian war, the Head of State called for “heal the wounds” which must be “closed with words of truth. , gestures of memory and acts of justice “.

Emmanuel Macron “asked for forgiveness” from the harkis in the name of France, Monday, September 20, and promised a law “of reparation” for these Muslim auxiliaries who fought alongside the French army during the Algerian war. The government “will bring before the end of the year a project aimed at inscribing in the stone of our laws the recognition and the reparation with regard to the harkis”, announced the president during a ceremony of homage to the Elysium.

After the war, some of them, abandoned by Paris, were victims of reprisals in Algeria. Several tens of thousands of others, often accompanied by women and children, were transferred to France, where they were placed in “transit and reclassification camps” with undignified and lasting traumatic living conditions.

Believing that the country had “failed in its duties” towards the harkis, the Head of State called for “to heal the wounds” which must be “closed by words of truth, gestures of memory and acts of justice”. “To the fighters, I want to say our gratitude; we will not forget. I beg your pardon, we will not forget,” he said.

These apologies are a new step for a head of state, after that of François Hollande, who had recognized in 2016 “the responsibilities of the French governments in the abandonment of the harkis”. A strong emotion was palpable in the village hall of the Elysee Palace, where Emmanuel Macron had invited some 300 people: harkis but also their descendants, heads of associations and personalities. The president’s speech was interrupted for a few minutes when a very emotional woman called out to him, saying that an apology was not enough. He was nevertheless applauded several times by the audience. 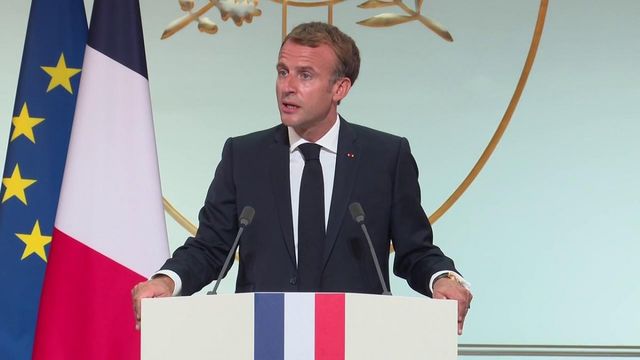