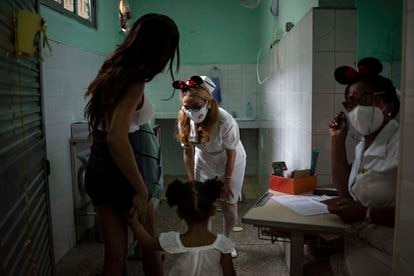 A nurse greets a girl about to be vaccinated in Havana, on Sept. 16. Ramon Espinosa / AP

In the midst of the worst coronavirus outbreak in Cuba, with infection figures exceeding 8,000 daily cases and more than 90,000 patients admitted to hospitals or isolation centers, the health authorities are continuing with the mass vaccination process, now also including in their scheme to children over two years of age. The island aims to have 90% of its population immunized with its own vaccines by mid-November, when the authorities predict that the worst of the pandemic will be over and plan to reopen its borders to international tourism. Cuba has two vaccines whose emergency use has been authorized, Soberana 02 and Abdala, and the latter, developed by the Center for Genetic Engineering and Biotechnology (CIGB), has also just been approved by Vietnam.

Abdala is the eighth Covid-19 vaccine licensed for emergency use in Vietnam, after AstraZeneca, Johnson & Johnson, Moderna, Pfizer, Sputnik V, Sinopharm and Hayat-Vax. The agreement between the two countries enables Vietnam to acquire the Cuban vaccine doses on the island, but also to produce them in its country. The news was released coinciding with the trip to Cuba of the Vietnamese president, Nguyen Xuan Phuc, who during his stay on the island (which ended this Monday) visited the CIGB and sponsored the signing of different collaboration agreements. With a population of 96 million, as of September 17, Vietnam had injected 33 million doses of different vaccines, and 6.2 million people had the full vaccination schedule.

Cuba has developed five vaccine candidates against covid-19, all with patriotic names: Soberana 01, Soberana 02 and Soberana Plus, created by the Finlay Vaccine Institute; and Abdala and Mambisa (the latter has the peculiarity of being administered by nasal spray), from the CIGB. All Cuban prototypes are protein subunit vaccines, which are based on inoculating a protein from the coronavirus spike, the part that binds to the cells it infects, to produce an immune response.

Of all of them, Abdala (with a three-dose vaccination scheme, applied in 28 days) managed to pass the three phases of clinical studies in July and received approval for its emergency use by the State Control Center for Medicines and Medical Equipment. (Cecmed), the Cuban regulatory authority. In August, Cecmed also approved the use of the vaccines Soberana 02 (in two doses) and Soberana Plus (which is administered together with the previous one in a third booster dose). According to the Cuban research centers, both Abdala and the Sovereigns have shown an efficiency of 92%, and now the procedures are being carried out for their validation by the WHO.

On September 4, the emergency use of Soberana 02 was also authorized in children from two to 18 years of age, making the island one of the first countries to start a campaign to mass vaccinate children against the disease. The goal is to have all children under the age of 12 vaccinated by the end of November. According to information provided by the Ministry of Public Health, at the end of September 15, 17,220,087 administered doses of Soberana 02, Soberana Plus and Abdala were accumulated in the country. To date, 7,461,666 people (66% of the population) have received at least one dose of these vaccines, while 47% already have two punctures and 39% have completed the cycle of all three doses. Cuba expects the 11 million Cubans to be vaccinated before the end of the year, 90% of them before November 15, when it plans to reopen its borders and reactivate its main industry, tourism, which has been practically paralyzed for a year and a half.

At the moment the country is experiencing a very complex epidemiological situation, with the highest numbers of infections since the epidemic began and the health services overwhelmed, which has caused the authorities to open the country to international humanitarian aid. If until the end of last year the daily infections on the island were counted by the dozens, for months the positive cases of coronavirus have been counted by the thousands, with the incidence rate in several provinces exceeding 1,300 per 100,000 inhabitants in the last fifteen days . Since the pandemic began, more than 800,000 people have been diagnosed with the disease in Cuba and 6,850 have died.

This situation, to which is added the acute shortage of all kinds of drugs and even problems with the production of medicinal oxygen, contrasts with the scientific success of having developed five vaccine candidates on the island – three of them already approved by the authority. Cuban regulator-, being the first country in Latin America to do so. Cuba assures that, in addition to immunizing its entire population with its own vaccines, it is capable of producing 100 million doses for export. Until now, Venezuela and Iran have been interested in Cuban vaccines, and as of this week also Vietnam.