COVID vaccine: Jair Bolsonaro, forced to eat on the street in New York

Since he has not wanted to receive the vaccine against COVID-19, the president of Brazil, Jair Bolsonaro, is being forced to adapt to a new reality during your current visit to New York: eating in the streets.

Bolsonaro had dinner this Sunday a piece of pizza standing up and in the middle of the street along with the members of his entourage, as seen in a photo shared by the Minister of the General Secretariat of the Presidency, Luiz Eduardo Ramos (@MinLuizRamos).

The image, one of the first curiosities left by the presence of leaders from around the world in New York on the occasion of the UN General Assembly, spread like wildfire on social networks. 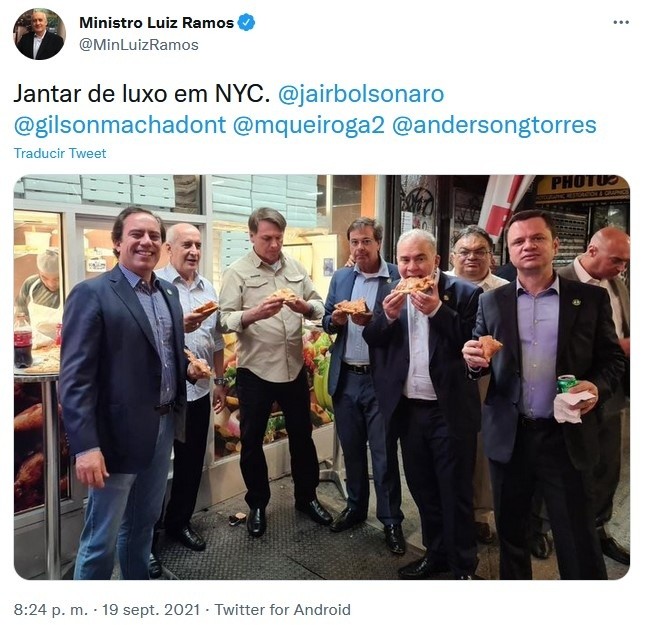 Today, the Brazilian president did not miss the opportunity to joke through Twitter, publishing a message in which several emoticons can be seen, including a slice of pizza.

For lunch on his second day in New York, Bolsonaro chose a central Brazilian restaurant, where a kind of open-air booth was improvised, according to Brazilian media.

And it is that the ultra-rightist leader is doomed to, at most, eat on terraces during his stay in New York, since the local authorities require proof of vaccination to be able to enter the interior of bars and restaurants.

Luck for Bolsonaro: that at least until Wednesday the most pleasant weather is expected in the city, with temperatures between 17 and 24 degrees Celsius.

Much criticized for his management of the health crisis, Bolsonaro, who usually says that he is already immunized after having infected with coronavirus last year, he has repeatedly stated that he will be “the last Brazilian” to receive an anticovid vaccine, of which 222 million doses have already been injected in his country.

Politically, however, the Brazilian president has encountered a much warmer climate due to his decision not to be vaccinated against the coronavirus.

Today, New York Mayor Bill de Blasio lashed out specifically against him, telling him that “if you don’t want to get vaccinated, don’t bother coming here.”

“We have to send a message to all world leaders, including most notably Bolsonaro from Brazil, that if you want to come here, you have to be vaccinated,” De Blasio said at a press conference.

If you want to come here, you have to be vaccinated

The Democratic politician’s words came with Bolsonaro already present in the city and, therefore, defying repeated calls from local authorities, concerned that the UN Assembly could trigger outbreaks of the disease.

It has triggered already tensions, as the New York City Council communicated last week to the United Nations that, according to municipal regulations, anyone who wants to enter the Assembly chamber should have proof of vaccination.

The organization, although it supports this idea, has made it clear that it does not have the authority to demand something like this from the heads of State and Government, so the decision is left in their hands, since New York cannot impose its rules at headquarters either. of the UN, given its special status.

Thus, Bolsonaro – who has not been vaccinated and has said on several occasions that he will be “the last” Brazilian to do so, if at all – plans to inaugurate speeches in the General Assembly this Tuesday, as traditionally corresponds to the representative of Brazil. .

If you were interested in this news and want to know more, then download and discover INFORMAPlus, https://www.paudal.com/’s digital application, where we have exclusive content, selected by our editors, to give readers a more complete experience.