Beaten in court, censored on social media, the Me Too movement in China vows to continue the fight for equality 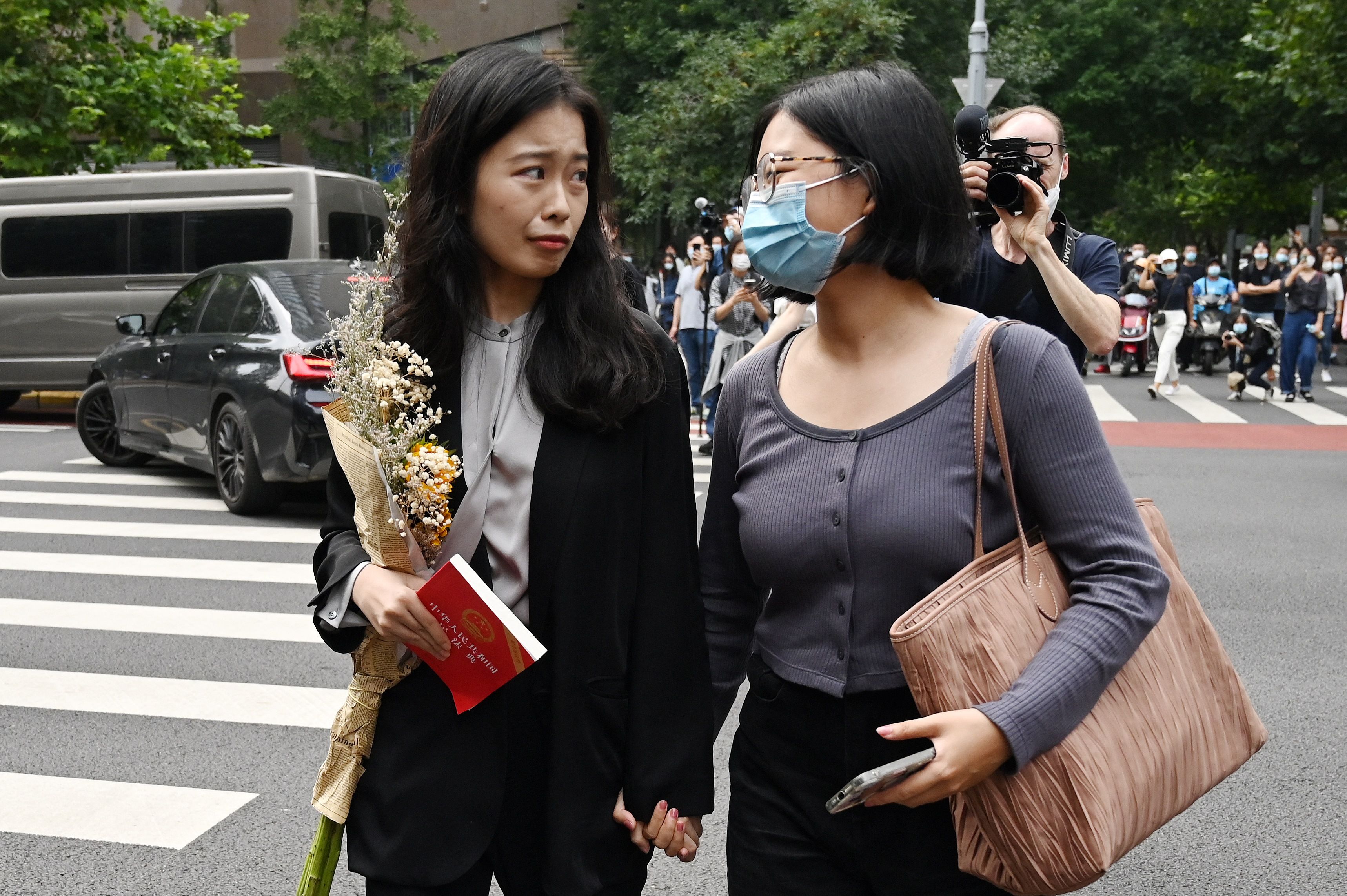 It was nearly midnight when 28-year-old Zhou Xiaoxuan left the Haidian District People’s Court headquarters in northwest Beijing on Tuesday. In the semi-darkness, with a haggard face, he burst into tears as he grabbed a copy of the new Chinese Civil Code, which since last December typifies sexual harassment as a reason to file a complaint by the victim. “I am sorry that I cannot offer a better result to everyone,” she declared, her voice cracking, confirming the defeat of her case to the few dozen supporters who had been waiting for her during the hearing. The court had just dismissed the complaint of the former Chinese state television intern against her former boss, the famous host Zhu Jun, for touching.

Zhou’s has been, perhaps, the most emblematic court case in the three-year history of the fragile Me Too movement in China and its denunciations of sexual abuse and discrimination, two problems that are still common in this society. The defeat in court, after three years of legal battles, now forces the movement to consider how to act in the future, in a political and social climate where spaces for coordinated protests by civil groups are increasingly closing.

Although more and more women – especially among the younger generations – are aware of the problems of inequality, as in other societies, harassment and abuse persist. The annual report of the World Economic Forum on gender equality in the world ranks China 107th out of 156 countries, seven spots lower than three years ago. In a 2018 survey, about 40% of the women consulted reported having had such problems in the workplace.

Xiaohai, a state media worker, affirms that in large companies sexual harassment is “very common”: “Meals are often organized for newly hired women under the pretext of helping them ‘become familiar with the environment of the company.’ Questions of a personal nature such as ‘do you have a boyfriend?’ or ‘have you already had relationships?’ they are the order of the day in this type of meeting ”. Corporate dinners, to which are added “voluntary” visits after working hours to karaokes, have proliferated in recent years, with the economic rise of the country. And they have a high sexist component, to prioritize among the guests the youngest of the office to the delight of the bosses.

Not that there has been no progress. When the first complaints from the Chinese Me Too emerged in 2018, then still very incipient, the concept of sexual harassment did not exist in the legislation. To go to court, the survivors had to resort to other technical figures, such as violation of the right to physical integrity. But that same year, the Supreme Court recognized that this type of abuse could be cause for a lawsuit. Since December 2020, the new Chinese Civil Code includes it to give protection to the victims.

The Chinese Me Too, also known as Mi Tu (“rice rabbit”, which in Mandarin sounds similar to the original in English), saw two cases of clear progress in August after several complaints were made online. The first, when the police arrested an executive of the electronics giant Alibaba on suspicion of abusing a subordinate. The second, which was more sensational, came with the arrest of Chinese-Canadian singer Kris Wu as a rape suspect, after a 19-year-old girl with many followers on social networks accused him of abusing her during a date. .

But the judicial triumphs are still a minority. The arrests of the Alibaba executive and Wu may be more motivated by the authorities’ wishes to set an example against two sectors of the economy that it has begun to regulate much more strictly in the last year: Alibaba is at the point of he watches for alleged antitrust practices, the entertainment industry for a “toxic” fixation on celebrity.

In a country where allegations of sexual abuse still carry a strong stigma for the complainant, and where the chances of a successful case are slim, survivors hardly choose to go to court. A Yale University study found only 83 cases related to sexual abuse or harassment between 2018 and 2020. Of these, 77 were complaints filed by the alleged harasser against his victim, for defamation, or against the company that had expelled him , for unfair dismissal.

The difficulties are also outside the courts, and come from the political system itself since five prominent activists in favor of women’s rights, nicknamed as “the five feminists”, were arrested in 2015. Censorship of publications made on the internet or accounts of the most prominent feminists in Chinese social networks is the order of the day.

In April this year, commentators of nationalist ideology attacked the movement’s most famous activists, accusing them of “collaborating with foreign forces.” A month later, the censors closed various student blogs on WeChat – the main Chinese social network, almost essential for daily life – that defended the rights of the LGTB community and women. In June, Weibo, the Chinese Twitter, suspended Zhou Xiaoxuan’s account for a year for “violations of the terms of use.” In August, another blog in defense of women’s labor rights, Pepper Tribe, announced its closure.

In addition, this month, the Alibaba executive was released due to lack of evidence. Her case and Wu’s have been featured in the state media as related to structural problems in their respective sectors of work, with no mention of women’s rights.

Following the court decision on Zhou’s case, the reaction from the official media has been similar. The newspaper Global Times, of nationalist ideology, published an opinion piece in which it affirmed that the Me Too is a movement imported from the United States and its “true objective in China is not to focus on opposing sexual harassment and promoting gender equality. Under the guise of a ‘popular movement based on breaking the silence’, it is actually a movement to instigate chaos, division and even subversion in China. “

“Many women continue to lack a voice, a lot of accounts continue to disappear, women’s rights continue to be a ‘reactionary force’,” she wrote in a blog in August. activist Lü Pin, founder of the closed magazine Feminist Voices and currently residing in the US “The space is getting smaller and smaller, and less and less can be done. I’ve asked myself a lot of times lately, how can our movement continue? I can’t see the future ”.

But the Chinese feminist movement has shown time and again its resilience and its ingenuity to continue. Lü herself points to the internet as a space in which, although the message ends up censored, it will first have reached many other women who will be able to reproduce it. Following his sad apology to his supporters, Zhou Xiaoxuan has vowed to appeal and continue his legal battle.

Xiaohai, the state media worker, is optimistic. “I don’t think the feminist movement will lose steam. The refusal to take Zhou Xiaoxuan’s case to trial has angered many women and attracted much interest. More and more people are questioning this issue and do not unthinkingly accept what the media or the Government have to say. The resolution is not going to stop the movement, ”he says.