Erin O’Toole, the Conservative leader who veered to the center to unseat Trudeau in Canada

The leader of the Conservative Party of Canada, Erin O’Toole, has spent the last hours insisting that he is the only one with a chance of defeating Prime Minister Justin Trudeau in the general elections this Monday. The Tory candidate is in second place in opinion polls with a vote intention of 31%, a technical tie with the Prime Minister’s Liberals. Trudeau dissolved Parliament in mid-August, starting a short campaign lasting only 36 days from which he hopes to emerge stronger in order to form a majority government.

“There are a lot of people in this country who are angry at Mr. Trudeau,” Conservative O’Toole said at a rally in London, Ontario, the province where 121 seats of parliament are up for grabs, the highest number at stake in the United States. The elections. “If we allow that frustration to do anything other than vote conservative, it is a vote for Mr. Trudeau,” added the opponent. The phrase, repeated in different parts of the vast Canadian geography in recent days, intends to amalgamate the punishment vote against the prime minister-elect in 2015. One of its main flags is the repudiation of the spending of almost 600 million Canadian dollars (470 million US dollars) from the elections, which they consider a whim of the current president.

Above all, O’Toole wants to stop the bleeding of votes that the center-right organization is having against the People’s Party of Canada (PPC), a libertarian and populist formation started by a conservative who left the ranks in 2019. The PPC is adding support to this campaign, driven by the anti-vaccine and anti-mask movement in elections that are perceived as a great referendum on Trudeau’s management of the pandemic. Training has grown 4.6% in voting intention in six months, according to polls. The Conservatives, on the other hand, have only gained two percentage points in the same period. This has forced O’Toole to reject the mandatory vaccination for government employees and propose instead that those who are not immunized are regularly screened with rapid tests. His party, which also rejects the vaccination passport that is already required in various public places, has not required the vaccine for its candidates.

At 48, O’Toole is a year younger than his main adversary. The Tory leader has wanted to distance himself from the prime minister. “When Trudeau made parties, I participated in search and rescue operations,” the candidate compared a few days ago, citing his experience as a helicopter pilot to be king of the Air Force, a short military career that he abandoned to study Law, the second career after his degree in History obtained in the Military College. However, the origins of both have similarities. He was born in Montreal and is, like Trudeau, who is the first-born of former Prime Minister Pierre Trudeau, the son of a veteran politician who was a local MP for the province of Ontario for almost 20 years for the Conservative Party.

O’Toole has been a federal congressman since 2012 for a suburb outside Toronto and had a brief experience in government in 2015 as head of the War Veterans portfolio. His great leap into national politics came in August last year, when he took control of the party. Since then, he has tried to shift to the center in a country that has been under Trudeau’s progressive tenure for five years. “Canada has changed and our party must change as well,” he said in March. This Wednesday he told a group of supporters: “We are no longer the same Conservative Party as your parents.” 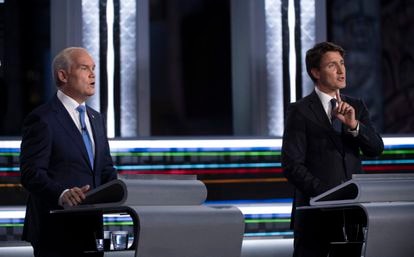 O’Toole and Trudeau at the French-language candidate debate on Sept. 8.Justin Tang / AP

Defender of a more inclusive party, O’Toole wanted to boost his progressive profile in the social sphere. This month he presented a plan to combat climate change, underlining that he is not opposed to abortion and that women have the right to decide on the termination of pregnancy. He has also reached out to the unions and softened his opinion on the right to own arms and its regulation, whose opposition is one of the pillars of traditional conservatives.

Some analysts have questioned the face that O’Toole has wanted to show in the campaign and have even described it as “two faces.” A poll conducted in August indicated that if Stephen Harper, the Canadian prime minister between 2006 and 2015, continued to lead the Conservatives, the distance with the Liberals would be much closer. This reflects that some undecided voters yearn for a more traditional party.

Economically, O’Toole proposes a temporary tax cut and support credits for small and medium businesses. He also wants to expand access to soft loans for construction employees, health workers and those who work with mental health. He has also proposed expanding the benefits of the already robust program to support children.