# Anti2010: three questions on this movement at the origin of harassment targeting college students born in 2010 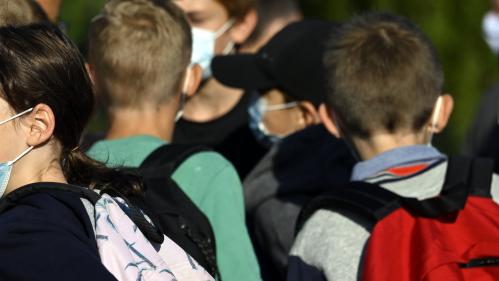 It is a worrying phenomenon. Several associations as well as parents of students have expressed their fears about the hashtag # anti2010, which targets college students in sixth grade on social networks. Since the start of the school year in September, this campaign of mockery, humiliation, even threats, has gained momentum.

Although the number of potential victims of harassment linked to this hashtag is not known, the association of parents of FCPE students alerted the Minister of National Education on Wednesday September 15. The next day, the latter called for the benevolence of older students and launched a counter-hashtag in response, # BienvenueAux2010. Franceinfo takes stock of this phenomenon which forced TikTok to react.

1What does the hashtag # anti2010 correspond to?

Behind this # anti2010, hides a smear campaign that has gained prominence on TikTok, a popular social network among young people. Videos marked with the hashtag # anti2010, # anti2010nul, # anti2010cancers or # brigadeanti2010 have multiplied with very scathing comments. We can thus see calls to “display” the clothing “ugliest”.

Most of these short videos mock the 2010. Others call on the 5th, 4th and 3rd students to “display the ugliest 2010 outfits” or even to “annoy all sixths”. Some are more threatening and, against a background of warlike images, appeal to join the fight against 2010. All of these videos tagged “anti 2010” have accumulated more than 44 million views on TikTok.

However, this campaign of insults does not seem recent since it had been marginal since November 2020, assures the Federation of parents of FCPE students in its communicated Wednesday. But it seems to have taken on another dimension since the start of the September.

2Why are young people born in 2010 targeted?

If it is difficult to clearly establish the genesis of this hashtag, two cultural references of the 2010 generation seem to crystallize most of the taunts and intimidation online. Paired with the rubber toy Pop It, which hit schoolyards in June, this generation is being mocked for its alleged faults of taste. And the song of a young YouTuber, Pink Lily, would have unwittingly amplified the phenomenon, explains The Parisian.

The acrimony towards the “2010s” also seems to be linked to Fortnite, one of the most popular video games in the world with more than 350 million accounts registered in 2020. This generation being accused by the “old” players of transgressing the rules of this game, officially prohibited for children under 12, and for making it out of date.

An attitude that would have unleashed the ire of older players, according to Yasmine Buono, founder of Net Respect which intervenes on the issue of internet usage among children and adolescents. “In the world of players, you have to know that it is the greatest who regulate the games, she explained on France Inter Friday. And there are gamers who decide to give lessons. This is how we created a reputation on this year of birth 2010 compared to cancer. “” It is enough for a player, a little influential, to have had problems with a young person born in 2010 and the phenomenon has has taken on a large scale, “she adds to the Parisian.

3What are the reactions?

This smear campaign is a phenomenon “to be taken very seriously,” said Justine Atlan, the general manager of the E-childhood association and of 30 18, the national number for the fight against digital violence. Although it is not necessary to “dramatize” the situation because “it concerns a whole age group, which allows all these sixths to be united and not to feel targeted in a personal capacity”, Justine Atlan recalled on franceinfo on Friday that the internet was not “a lawless zone”. It also welcomes the responsiveness of the authorities to this phenomenon.

Because this smear campaign can turn into cyber-harassment, or even have consequences even in the playground, even if it is difficult today to know the extent. Julie, 11, testifies in The voice of the North : “The older ones keep telling us that we, the 2010s, are going to be hit and insulted when we return to college on Monday because of videos made by other people born in 2010 on TikTok”. Neither the teachers’ union Unsa, nor the SNPDEN (National Union of National Education Management Staff), contacted by Le Parisien, have so far had any particular feedback on the subject.

Faced with this phenomenon, the Federation of parents’ councils (FCPE) asked the government “to act urgently” in its communicated September 15. She recalls that “harassment should in no way be trivialized or taken lightly. And in the unregulated digital world of social networks, it takes pride of place alongside conspiracy, manipulation and ‘fake news’.” The association also urges the government to put in place “a real child protection policy on social networks”.

In the process, the Minister of National Education, Jean-Michel Blanquer, on Thursday called for the benevolence of older students towards their comrades born in 2010 in a video tagged # BienvenueAux2010 and published on his Twitter accounts , Facebook, Instagram and Snapchat. He reminds us that “bullying has no place at school”.

We say YES to the fellowship.
And NO to harassment.
We welcome new college students, 6th grade students.
So you too would like # WelcomeTo2010.
And don’t let anything go:
➜3020 facing harassment
➜3018 in the face of cyber-harassment pic.twitter.com/ZahKNxpdMD

At the same time, the cabinet of the Minister of National Education confirmed to the Parisian that “a ministerial alert message was sent to college principals and harassment referents, reminding them of the instructions to be followed”. Some establishments in Ile-de-France have already sent an e-mail to parents of students to alert them to this smear campaign. The management invites them to discuss it with their child and reminds that any student who is identified as a bully will be liable to disciplinary sanctions.

The ministry also seized the GIP ACYMA (Public interest group action against cybermalveillance), for reporting the hashtag # anti2010 to all social media platforms.

A mobilization that has borne fruit since the hashtag # anti2010 was banned from TikTok on Friday, franceinfo noted. No more research, hashtag, message or user showing this unique mention is possible on this popular social network among adolescents. “This sentence may be associated with behavior or content that violates our guidelines,” writes TikTok when the user types “Anti2010” in the search bar. However, accounts referring to it manage to circumvent this new rule by adding one or more words. They are still active, franceinfo noted.

* There are several listening services, accessible free of charge: the 30 20 (Monday to Friday, except public holidays, 9 a.m. to 8 p.m. and Saturday 9 a.m. to 6 p.m.), made available to students, families and professionals to report situations of harassment between students; the toll-free number “Net listens” 30 18 (Monday to Saturday 9 a.m. to 8 p.m.) or the line https://www.netecoute.fr/ for young victims of digital violence.
Further information is also available on the website of the Ministry of National Education.