We tell you why TFC supporters will “crack” on Saturday 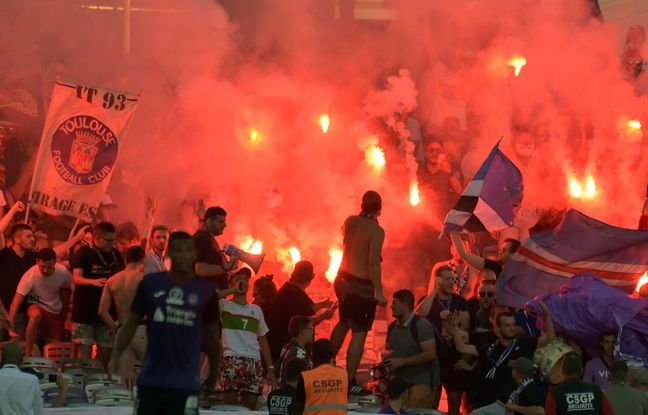 For once, the supporters of the Brice-Taton stand at the Stadium will perhaps have more pressure than the players of the TFC at the start of the match against Grenoble this Saturday (3 p.m.). Sixteen members of
Indians Tolosa will have the opportunity to influence the future friendliness of all stadiums in France after the depression of the spans deserted due to coronavirus.

Because, for the first time since the return of the public, they will have the right to “crack”. To light smoke or Bengal fires without fear of being arrested by the police. The opening tiffo will indeed be with the blessing of the club, the Professional Football League (LFP) and even the Ministry of Sports. Not to mention the prefecture, the police and the fire brigade. “It all started with a dialogue with our supporters,” explains Olivier Jaubert, the deputy managing director of TFC. We could not accede to their request to introduce smoke bombs since it is illegal but we were ready to make the journey together ”.

The club’s security director set up the file and contacted all the interlocutors. Request therefore accepted. But the green light does not open the door to total cracking. “We will have to show a white leg”, admits Alexandre Roux, the president of the Indians, “happy with this first step” but which recalls the position of principle of the group “against the abusive repression of smoke bombs”.

In addition to the exemplary pledges already given – no one has lit pirate smoke bombs in the stand since the start of the season – we will have to comply with drastic specifications.

Morning training with an artificer

Observed closely, the sixteen Indians on the front row should not forget their gloves and protective goggles. They will then have to be confined to the shooting perimeter: “There will be a no man’s land of five meters between the zone and the first row of the stand, the shooters will be spaced three meters apart and no equipment will be stored in the Stadium”, explains Olivier Jaubert.

Last but not least, the “chosen” one evening will have to comply on Saturday morning with training provided by a professional fireworks technician who will land with his equipment and stay for the tiffo. Which still makes the president of the Indians smile. “All those who will be there have already cracked dozens, even hundreds of smoke bombs in their life,” he slips. “But this time, they will do it without taking any risk,” notes Olivier Jaubert. Some shooters will appreciate the irony of the situation since they have already served stadium bans for doing the exact same things.

The Indians do not hide it, at the fateful moment, they will also have “a big thought” for three of their members currently condemned to follow the leader of Ligue 2 from their sofas. No joke, however, the rule is clear, no other test without a positive result. Big stake.