Commotion in Valencia after Juan Genovés accused a well-known priest, promoter of modern art, of pedophilia

The memories of the Valencian painter Juan Genovés, author of Hug, a painting symbol of the Transition, and who died in 2020 at the age of 90, they contain an accusation of pedophilia against a priest from his childhood and have shocked the Valencian artistic world. Because it is not just any priest, but Alfons Roig, a passionate about art who was a cultural institution in postwar Valencia.

As a professor at the city’s School of Fine Arts since the 1940s and a connoisseur of European art of his time, Roig opened education to modernity, introduced the avant-garde during the Franco regime and was decisive in the training of many artists. He also maintained friendships with members of the Generation of 27, whom he personally helped in some cases, such as María Zambrano, Juan Gil-Albert, José Bergamín, Vicente Aleixandre and Emilio Prados, as well as with the widow of Miguel Hernández. He donated his valuable art gallery, with works by Picasso, Julio González and Kandinski, to the provincial council, which also created awards with his name in 1983. Roig was born in 1903 and died in 1987. The auditorium of the faculty of Fine Arts of Valencia.

Genovés, however, assures in his authorized biography, published last June, that the priest had a hidden face. The book, Juan Genovés. Citizen and painter (Turner), by Mariano Navarro, Armando Montesinos and Alicia Murría, and based on interviews with the author, mentions the episode on two pages. The artist recounts his arrival at the San Carlos de Bellas Artes school in 1946, when he was 16 years old, and that he met Alfons Roig, whom he already knew because he was the priest of his neighborhood: “When he saw me in San Carlos he made a face Of horror. “Now this man will tell what he knows,” he must have thought; and what I knew was what everyone in the neighborhood knew, that he abused all the children he could in exchange for the food he provided for their parents. No, I never said anything, but I had no sympathy for him, but evidence of what I knew I did. Now, anyone told something negative about a priest at that time… ”.

The painter assures that “a neighborhood priest at that time of the dictatorship had more power than a civil governor.” After his ordination, Roig was parish priest in the Valencian municipality of Pinet and later in the church of San Juan de la Ribera, in Valencia, in the neighborhood where Genovés lived his early years.

Genovés also relates that, in addition, Roig sometimes passed by his school, the Hispanic American: “From time to time, in the middle of class, he would appear at school. He used to say to the teacher: ‘Well, Don Santiago, leave me these little devils to bring them a little closer to the Lord, they may have forgotten him.’ Don Santiago would rush out of class without saying a word, and then he would begin a very long rosary, with his Hail Marys and other jokes, and he would also begin his session of fiddling and fingering us. So much so, he was having such a good time, that with his enthusiasm he forgot to pray ”. 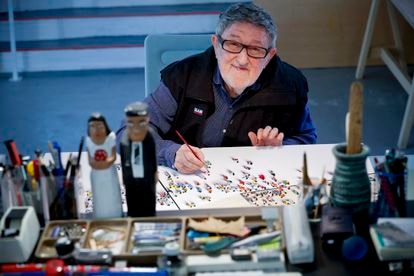 Juan Genovés, in his study in 2012, Monica García

These lines had gone unnoticed until on Tuesday, the 14th, the newspaper echoed them Levante. Faced with the uproar, Mariano Navarro, art critic and one of the authors of the book, first clarifies that it is Genovés’s faithful testimony: “It is recorded on tape and with his voice, and we have edited the book as it is. read ”. “I do not want to downplay what he said, but he did not give it so much importance, he told it as one more anecdote about the educational environment of those years and a terrible post-war period,” he explains.

The interview in which he spoke about this matter was recorded between January and April 2016, at a time when numerous cases of pedophilia had not yet begun to emerge in the Spanish Church. In 2018, an investigation by EL PAÍS began and since then 357 cases with almost 900 victims have already been registered, according to the accounting kept by this newspaper in the absence of official figures and the refusal of the Church and the authorities to investigate the cases. The latest to be discovered involves another well-known priest, Cesáreo Gabaráin, the modernizer of mass music in the 1970s.

“I understand that it raises blisters”, reflects Navarro, “but it is what he saw. He was a witness in class of a sobón priest, of touching ”. And he points out that Genovés did not tell about these events with the idea that they would come to light after his death: “Not at all. He said it in life, and the book was going to be published in life, but unfortunately he died earlier. ” The writing of the work was completed in December 2018, but then the pandemic arrived and its publication was delayed. “I would not like this question to be used to attack Juan Genovés, with all that he has meant for this country, for a childhood memory. I feel a deep discomfort if someone thinks that he wanted to file an accusation against Roig or discredit his figure, as if that were his intention, when there are a few paragraphs in a book about all his work ”.

The priest Roig was a professor at the School of Fine Arts and supported renowned artists when they were starting out, such as Eusebio Sempere, Hernández Mompó, Andreu Alfaro and Manuel Valdés. Also José María Yturralde, National Prize of Plastic Arts 2020, was one of them. He lived in Roig’s house in Valencia, when he moved to study from Navarra in the 1950s, and traveled with him to various European countries. “I knew him well,” Yturralde, 79, now declares to EL PAÍS. “He was an extraordinary person, cultured, sensitive, with international training, who helped many of us at that time. It has surprised and hurt me [el testimonio de Genovés]. I’m not saying it wasn’t like that, but I didn’t experience any of that. I was also a friend of Genovés and he did not have to lie, but perhaps the events today are interpreted differently after so many years. I do not know. Then it was known that he was homosexual, we were open, but society was not. The abuse of minors is another thing. I hope that all this does not waste everything he did, which was a lot ”.

Also Artur Heras, 76, was a student and friend of Roig. The artist and ex-manager of the mythical Parpalló art hall of the Valencia Provincial Council is very critical of “parallel trials, with faceless accusations, based on assumptions, without concrete data, very typical of these times, and made in this case for someone who, in addition, was not a victim ”. Heras wonders why Genovés lent a work for the tribute exhibition Alfons Roig and his friends, which he dedicated in 1988 precisely the Parpalló room to the priest. “Then he said nothing and participated. It is contradictory, isn’t it? ”, Heras, recalls Roig as a“ marginalized ”person who lived in a humble way.

Jordi Teixidor, 2014 National Prize for Plastic Arts, points out that Roig’s homosexuality was known among the students. “But about that part that Genovés tells us, we had no knowledge, not even rumors,” he says. “Roig’s work was very important because he was the only one who knew about contemporary painting. He was the priest of modernity ”, he adds. Teixidor would consider it unfair that Roig was only known for this accusation and not for his entire legacy, although he understands that “society today openly condemns and does not hide” cases such as the one described by Genovés.

Sources from the presidency of the Valencia Provincial Council, led by the socialist Toni Gaspar, ask for calm and not to precipitate reactions. The deputy for Culture, Xavier Rius, from Compromís, calls for “prevention” in a case in which “the accused cannot defend himself because he is dead.” “Nor do I have to doubt the credibility of Genovés, whom I met, lucid and upright,” adds Gaspar. “There are more than 20 years of Alfons Roig awards and we have to see the repercussion and analyze the situation.”

If you know of any case of sexual abuse that has not seen the light of day, write us with your complaint to [email protected]