More than 2.8 million Americans benefit in six months from the Obamacare extension 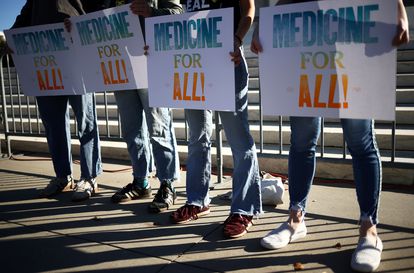 Protest in defense of the Obamacare program before the Supreme Court, in November 2020 in Washington.HANNAH MCKAY / Reuters

More than 2.8 million Americans have enrolled in the Obamacare program, thanks to a special extension announced in February as part of the pandemic rescue plan, to access low-cost health insurance. Thanks to this special enrollment period, President Joe Biden hopes that more citizens will be able to “sleep soundly at night” knowing that “they will be covered if the worst happens to them.”

“When I ran for president, I promised to protect and enforce the Affordable Care Act,” the official name of what is popularly known as Obamacare, Biden explained in a statement. On February 15, less than a month after the replacement in the White House, the Government opened an extraordinary registration period that lasted for six months and with which the Administration sought to alleviate the possible social and health deficiencies derived from the covid-19 pandemic. 19, and especially those of those citizens who were left without coverage after losing their job due to the pandemic.

Thanks to the special term, “2.8 million families will have more security, feel more relieved and have more money in their pockets if their home is affected by an illness or an accident,” Biden said in the statement. With this update, 12.2 million people are already benefiting from the plan designed during the Barack Obama administration and cut with all kinds of restrictions during Donald Trump’s presidency.

Beneficiaries have seen their premiums drop an average of $ 67 a month, which means “more than $ 800 a year,” according to the statement. More than four out of ten enrolled in this extension have been able to access coverage plans with a cost of less than $ 10 per month.

Biden has also defended other measures of his rescue plan, such as the reduction in the price of medicines, and has urged Congress to also join this fight to expand access to health care for the entire population.

Because the White House statement not only celebrates the success of Obamacare; It is also a subtle reminder of how much is at stake in Congress: the gigantic social coverage plan, with an expected investment of 3.5 trillion dollars, which aims to expand the network of aid to the most disadvantaged sectors and, Ultimately, it constitutes a comprehensive plan to combat poverty. Stranded between the moderate and progressive sectors of the Democratic Party – between the proposals of both factions there is a difference of two trillion dollars in spending, down in the case of the centrists – the plan represents one of the pillars of Biden’s mandate. and the biggest socioeconomic policy gamble since President LB Johnson’s Great Society program in the 1960s. Biden’s ambitious social program is the twin of the infrastructure plan, already on track in Congress, although with a lower investment than initially planned.

Among the measures proposed by the great social program are, among others, free pre-school education for all 3- and 4-year-olds; pay more to caregivers, 95% of whom are women; halve the cost of such care for most families; and make permanent the tax deduction for the care of minors and dependents. Also expand the coverage of the two public social security programs, Medicare and Medicaid, for the elderly and people without resources, respectively.

Treasury Secretary Janet Yellen and Vice President Kamala Harris will urge Congress on Wednesday to support public spending on affordable child care – a market that moved $ 60 billion in 2019 – supported by a recent Treasury report that describes the great benefits of such investment in the economy as a whole.

Investment strategies in the face of stock market adjustment risk

Weather in Tonalá today: the forecast for Saturday, September 25, 2021

What conclusions can be drawn from Alaphilippe’s season with the rainbow jersey?

Labor poverty will return to the prepandemic level at the end of this 2021: Coneval

Young man quits his job over the loudspeaker; your message goes viral