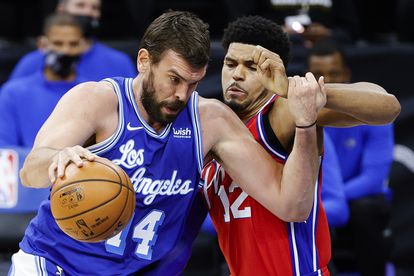 Marc Gasol tries to overtake Tobias Harris in a game between the Lakers and the Sixers, Tim Nwachukwu / AFP

Marc Gasol reached an agreement with the Memphis Grizzlies and terminated his contract with the Tennessee team on Wednesday. At 36 years old and after 13 seasons in the NBA, the Spanish center is free. His intention, after ending his long period in the United States, is to return to European basketball.

The termination of the contract was already foreseeable because that was the intention of the parties when the Lakers, the team in which Marc played last season, transferred him on September 10 to the Grizzlies. In return, Memphis gave the Lakers a second-round pick of the draft 2024 and the rights of Chinese Wang Zhelin. The plan benefited the Lakers, who were released from Marc’s second year of contract, with a token of 2.6 million dollars, 2.2 million euros. Marc will now study the offers he receives, with the possibility of returning to Spanish basketball.

After deciding to end his career with the Spanish team after the Tokyo Olympics and enjoying a break, Marc has returned to training in Girona, where he resides. Now you can decide, based on the offers, the team in which you will play next season. One of the possibilities is that he could do it in Leb Oro with Bàsquet Girona. It is the club that he founded and presides over since 2014 and that in 2020 managed to ascend to the second category of Spanish basketball. Marc has repeatedly expressed his desire to one day play at Bàsquet Girona, the city where his extraordinary career took off playing two seasons with Akasvayu, to which he arrived on loan from Barça in 2006. After being designated the best in the ACB League In 2008, he began his NBA career with Memphis.

He was a three-time All Star, Best Defensive Player in 2013 and won the title in 2019 with Toronto. He is also in the small group of players who have added more than 10,000 points, 6,000 rebounds and 2,900 assists in the American league. In the 2014-2015 season he starred with his brother Pau in a photo for the history of Spanish sport. Both competed in the opening jump of the All Star held in Brooklyn. His performance last season with the Lakers was much lower than usual. He played 57 games and only averaged 19.1 minutes, 5 points, 4.1 rebounds and 2.1 assists, far from the 19.5 points 6.3 rebounds and 4.6 assists in one of his best seasons, 2016 -2017 with Memphis. He played nine times the playoffs and in the 891 regular season games he has played in the NBA, he averages 14 points, 7.4 rebounds and 3.4 assists.

Independence of Mexico: Do ​​I get paid double if I work this September 16?

Markets: Argentine stocks fell as much as 9% on Wall Street amid cabinet crisis

Markets: Argentine stocks fell as much as 9% on Wall Street amid cabinet crisis