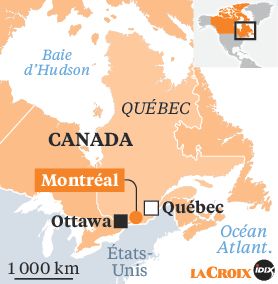 It’s hard to campaign in Canada in 2021 without talking about the environment. The summer was marked by numerous fires and a heat wave that claimed 570 lives in British Columbia. The televisions broadcast on a loop the images of a village ravaged by flames or of winegrowers contemplating their grapes scorched by the sun.

Ecology therefore prevailed in the debates for the September 20 election. “Even the conservatives started talking about it, while under their government scientists in the public sector did not even have the right to confirm the existence of global warming,” observes Sebastian Weissenberger, professor of environmental science at the University of Quebec, in Montreal.

Erin O’Toole’s Conservative Party is thus committed to respecting the targets of the Paris Agreement, by focusing in particular on the manufacture of zero-emission vehicles in Canada. But without touching the fossil fuel industries, which account for more than a quarter of the country’s greenhouse gas (GHG) emissions.

Among the liberals, in power since 2015 and eternal rivals of the conservatives, the green speech is not new. Six years ago, the current Prime Minister Justin Trudeau said he wanted to eliminate subsidies to the fossil fuel sectors, which are important in the west of the country. In 2021, however, they are still there. Like the promise to end it, again in the program of candidate Justin Trudeau.

“Its climate agenda is ambitious,” admits Sebastian Weissenberger. In particular, there is a 40 to 45% reduction in GHGs by 2030. “But without cutting ties with oil from Alberta, who can still believe it? He asks himself.

The outgoing Prime Minister’s record is not entirely negative when it comes to ecology. Jean-Thomas Bernard, who teaches environmental economics at the University of Ottawa, welcomes the creation, in 2019, of a carbon price. Ottawa sets a floor price per tonne of carbon, which companies pay when they pollute. “We’ve been talking about it for twenty years, he did it. But, at the same time, Canada is stepping up projects to allow for marine oil drilling. Earlier this year, the Trudeau government authorized 40 boreholes off the coast of Newfoundland.

This more than mixed record and the conservative reluctance do not benefit the Green Party, mired in an internal crisis. The polls give him only 3% of the vote, half less than his result in the last ballot. By appearing Tuesday, September 14 with an expert of the IPCC and ex-green who dubbed his proposals, Justin Trudeau, neck-to-neck with Erin O’Toole in the voting intentions, intends to recover the environmentalists lost on the way by their party.

Airlines are struggling: vaccination requirements for ‘flying’ personnel are not allowed. Then take a detour