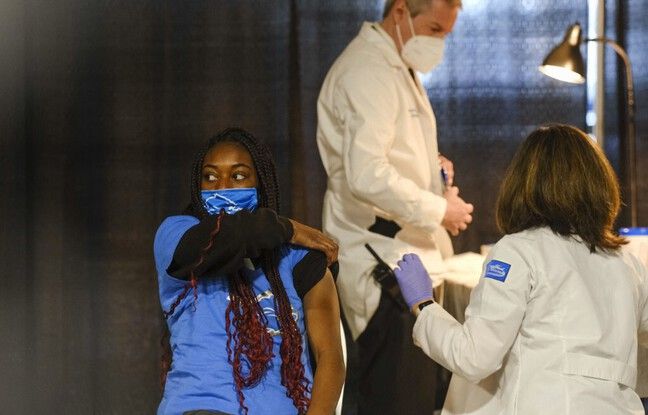 The peak of the coronavirus epidemic, dominated by the Delta variant, is expected to be reached soon in the United States, but experts warn against complacency and expect the virus to become part of everyday life for for years to come.

Even as the rate of the increase is slowing and cases are on the decline in most states, the seven-day average of daily cases was 172,000 as of Monday, the highest level of the increase, according to data from the Covid Act Now organization.

But more than 1,800 people die every day and more than 100,000 remain hospitalized after falling seriously ill, a grim reminder of the challenge authorities face to immunize enough Americans in the face of misinformation. If Bhakti Hansoti, associate professor of emergency medicine at Johns Hopkins University, says she was relieved to see the spring wave end, she says she is “a little hesitant this time”.

Because the possible emergence of disturbing variants as well as the onset of winter (during which social interactions take place more indoors) could lead to a further increase in cases, “unless we learn the lessons of the fourth wave” , she emphasizes. Angela Rasmussen, a virologist at the University of Saskatchewan in Canada, says she is not sure that the fourth wave is over. “If you look at the fall-winter wave, there were times when there was an exponential rise, then it seemed to drop, and then there was a further rise,” she explains.

It is therefore crucial to increase the number of people vaccinated. Today, 63.1% of the eligible population over 12 is fully vaccinated, or 54% of the total population. This places the country far behind world leaders like Portugal and the United Arab Emirates (81% and 79% of people fully vaccinated), despite the abundance of vaccine doses in the United States. President Joe Biden’s administration last week announced a series of new measures to speed up vaccinations, such as the vaccine requirement for companies with more than 100 employees, but the impact remains to be seen.

Beyond vaccinations, experts want to see other measures continue. For Thomas Tsai, a health policy researcher at Harvard, outbreaks of Covid-19 must apply the wearing of masks and the United States should take inspiration from countries that have adopted large-scale rapid tests for schools and businesses. Such tests are available for free or for a small fee in Germany, Great Britain or Canada, but remain around $ 25 for a pack of two in the United States. But the impact of these measures depends on their implementation, and the United States remains clearly divided in two: progressive regions are much more willing to comply than conservatives.

Before the Delta wave, experts had estimated that between the number of people vaccinated and those immunized after an infection, the country was approaching group immunity. Predictions that have turned out to be false, notes Angela Rasmussen, according to whom it is still too early to say when this threshold will be reached. “There are still places in the country where the adult vaccination rate is less than 50%,” she notes. The virus also continues to evolve rapidly and virologists fear the emergence of more dangerous variants. “I don’t want to be an ominous bird, but I also want to have a little humility because I don’t think we know much about the basic functions of many of these mutations,” adds Angela Rasmussen.

Experts continue to hope that the vaccines will continue to protect most people from the worst symptoms, and look forward to seeing them licensed for children under 12 in the months to come. Rather than eradicating the virus, the goal now is to make the vaccine more like the flu for those vaccinated and infected. However, uncertainties remain: even vaccinated people could thus suffer from “long-term Covid”. And Greg Poland, expert in infectious diseases at the Mayo Clinic, predicts it: humanity will still have to manage the Covid “well beyond the lifespan of the next generations”.

Music for after the summer

Why visiting a sewage treatment plant should be compulsory

Lithuania calls for Chinese phones to be thrown away