Euro volleyball: eliminated in the round of 16, the France team falls from high against the Czech Republic 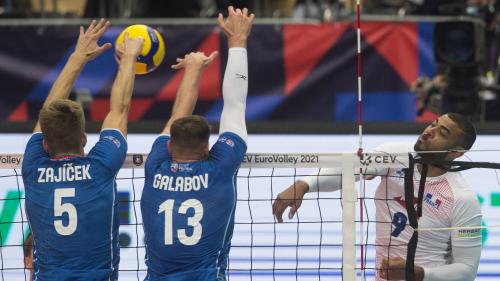 It was the first knockout match for the Blues since the start of the European Championships. And, all Olympic champions that they are, the French tripped over this obstacle, Monday, September 13 in Ostrava. Supported by their public, the Czechs surprised the Tokyo gold medalists in three dry sets (25-22, 25-19, 34-32) and will meet the Slovenes in the quarterfinals.

The Blues, them, will have plenty of time to meditate on this brutal elimination. The return to earth, after having familiarized with the Japanese skies, is indeed as violent as it is unforeseen. Barded by the almost unshakeable confidence that an Olympic title confers, very positive about the arrival at their side of the legendary Bernardinho to take over from Laurent Tillie, the partners had started this European Championship as they had finished their Olympic Games. In a state of grace. First five games, five wins and a single set conceded to Germany.

Perhaps they have taken the Czech Republic from above? Coached by Jiri Novak, a former great player in the French championship, this team quickly brought the Blues down from their pedestal. This round of 16 only started a few seconds ago and the Habs are already 4-0 down. A difficult but temporary start? Absolutely not. Bernardinho’s players will never give the impression of entering the match, of showing the slightest feeling of revolt, the very one that allowed him to overthrow mountains in Tokyo.

Led by its sharp Hadrava, unplayable Monday, the Czech Republic has not shown the slightest sign of weakness, has not opened the slightest door to allow the Blues to believe in an incredible comeback. Like a Ngapeth clearly inside, the French never found the right tempo, even when they painstakingly obtained two balls from a 3rd set which would have allowed them to stay a little alive in this tournament. A final jump, and seven match points saved, including one on a challenge when the Czechs were already celebrating victory, could have raised hopes for a miracle. But the latter was really out of reach for these Blues.